When you think of the financial services sector you, dare I say it, probably think of an industry which is predominantly male, pale and stale, dominated by stuffy, public school boys in braces. And, if you look at the latest reports, you would be right.

A recent study by Oliver Wyman consultants, entitled Women in Financial Services, highlighted that very little progress had been made for women over the last decade or so.

The study, which looked at female representation on board and executive committees in more than 381 financial services organisations, found the number of women on executive committees has only increased by around 5 per cent since 2003, to an average of 16 per cent in 2016, up from 11 per cent. Around 20 per cent of the companies that took part in the survey, which included firms from 32 countries, had women on the board. 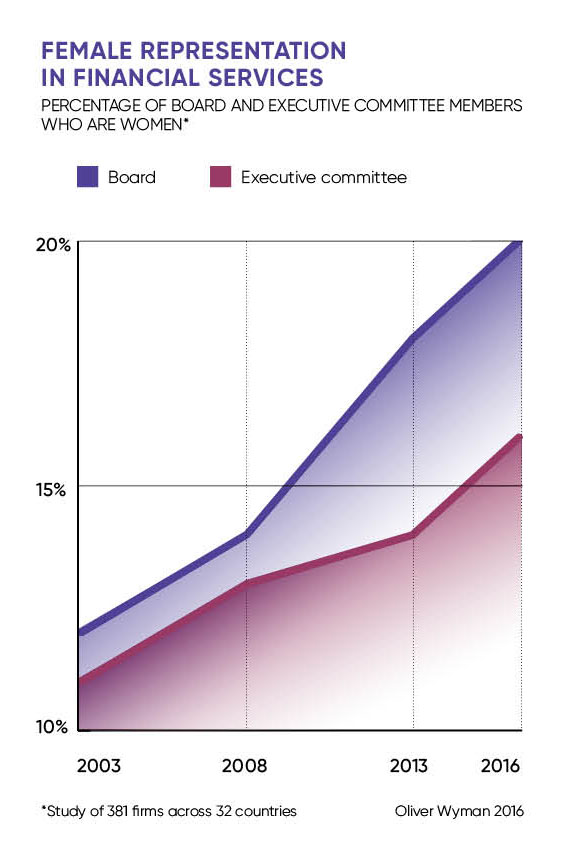 Perhaps most tellingly, however, was how the gender divide increases higher up the management chain. Whereas men and women were generally equal at entry level, with approximately 48 per cent of professional entry-level positions being filled by women, this drops off at middle management (40 per cent women) to senior management (28 per cent), then declines further to 21 per cent at board level.

Brenda Trenowden, global chair of the 30% Club gender balance lobby group, says the financial services sector needs a massive overhaul when it comes to gender parity. She notes: “Undoubtedly the biggest blocker to gender balance within the industry is its male-dominated culture.”

Phanella Mayall Fine, leadership coach and founder of the Step-Up School, which works with senior-level women in blue-chip firms, says women are still subject to unconscious bias. “We often find that even when women get past middle-management level and reach a relatively senior level, they stall again when it comes to executive roles,” she says. “This is almost exclusively due to bias and a lack of network support.”

Part of the problem is, at the risk of stereotyping, that women inevitably want to take some time out to have children at some point in their working lives. This can, says Ms Mayall Fine, have a detrimental effect on their career.

“Generally, women are still taking on the role of primary caregiver when it comes to having children,” she notes. “It’s usually the woman who feels more strongly about being home for their child’s bedtime or who earns less and so, by default, ends up being the one who does the school run.” This creates an issue in companies that aren’t embracing a culture of flexible working. “The woman is seen to be leaving early, even though they may well be logging on in the evenings from home, and resentment in the team builds,” says Ms Mayall Fine.

Karen Mattison, joint-chief executive of Timewise, which runs the Power Part-Time List and promotes flexible senior-level roles, says there comes a point in every employee’s life when flexibility is as important as salary.  Many women step off the career ladder at middle-management point when that lack of flexibility becomes a deal-breaker for them. “If a woman has negotiated three or four days a week with her employer and it’s a question of trading that to join the board, she will probably opt out,” says Ms Mattison.

The recruitment world also hasn’t caught up with this need and want for flexibility, she says, so you rarely see any senior-level part-time roles advertised.

Perhaps the fact that most women still don’t see themselves as future CEOs is also a contributing factor. Recent research by the Korn Ferry Institute included interviews with 57 women who have been or currently are CEO (38 currently and 19 previously) at Fortune 1000-listed companies. They found that very few women actually envisage themselves in the top spot. 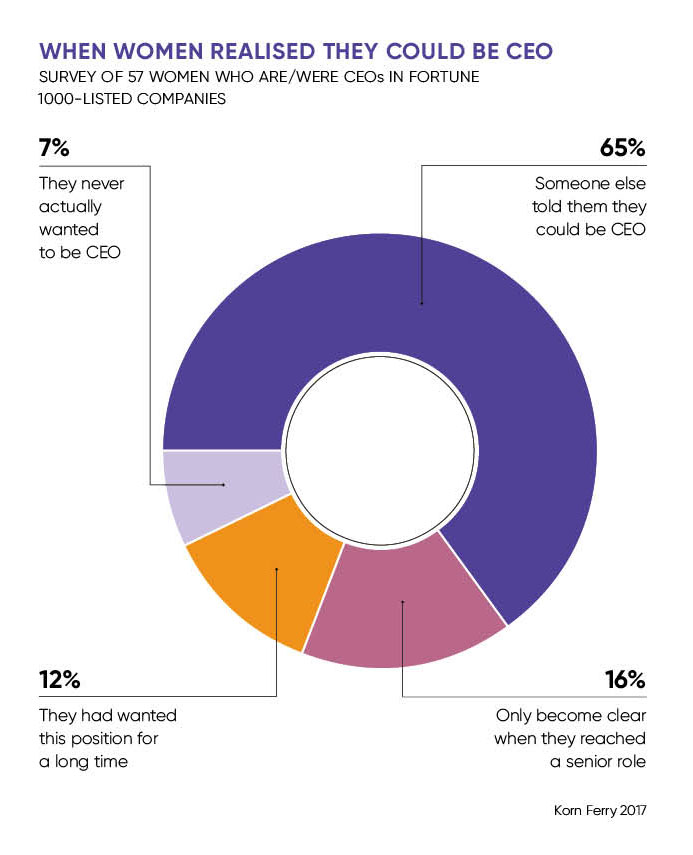 Only five of the chief executives interviewed said they had always wanted to be CEO and three said they took the job out of a sense of responsibility. This is not surprising when you factor in that 94 per cent of Fortune 1000 CEOs are men.

He says that many employers still have a rather anachronistic view when it comes to nine-to-five presenteeism. “Only 1 per cent of flexible working is made up of job shares, according to our research,” he notes. “Having a policy in place is one thing, but implementation and uptake is another.”

So what can be done to attract, promote and retain women at board level in the financial services sector?

Mr Willmott believes they need to advocate more female role models. “It is the impact of visible female role models in executive-director positions that has the most potential to change organisational culture and encourage more senior-level progression for women directly below board level,” he says.

There is, however, heartening evidence that progress is being made and will continue.

The Hampton-Alexander Review, a government initiative, aims to increase the number of women on boards in FTSE 100 companies from 25 per cent to 33 per cent by 2020.

Emma Codd, managing partner for talent at Deloitte UK, says they are very aware the drop-off at middle-management level largely coincides with when women want to start a family and that this was an identifiable pain point in the firm’s 2014 gender balance action plan.

The accountancy firm has since launched a “time out” flexible working programme and a management training scheme on how to support staff re-entering the workplace after parental leave.

Company data shows they are making progress as the proportion of female partners at Deloitte increased from 12 per cent in 2012 to 19 per cent in 2017. “Female attrition has significantly dropped too,” says Ms Codd. “Women are now choosing to remain with us following maternity leave and the number of women who are working in an agile way has increase significantly.”

Laura Hinton, head of people at PwC, says organisational culture is the main determining factor when it comes to setting internal targets for gender diversity. The firm, which is a signatory to The Women in Finance Charter, aims to link the pay of the senior-executive team to its gender diversity targets. “In our experience, this level of transparency and clear accountability should help to drive real and sustainable action,” says Ms Hinton.

PwC also offers a range of different working options and patterns. “We offer flexible working, enhanced shared parental leave, returnships, and constantly challenge our recruitment and progression processes to make sure they are open to all,” she says. “Having the right policies in place is important, but setting aspirations for levels of take-up is what is required to really drive the change.”

The 30% Club’s Ms Trenowden says firms that manage to tackle gender parity will, ultimately, benefit. “The companies that get on this journey will reap the rewards of a more inclusive culture and better business performance,” she concludes.