Evolution of the legal COO

The entrance of the Big Four accountancy firms to the legal market in recent years, coupled with an influx of nimble, innovative startups, has heightened competition in an already saturated sector, forcing firms to re-evaluate their business models. The need to maximise efficiencies and commercialise practices has positioned the COO at the forefront of change.

COOs first began to emerge in large legal practices around 20 years ago, but despite becoming an increasingly common fixture, 56 per cent of global firms with more than 500 employees are yet to appoint one, according to recent research from BigHand. Understanding their value, as well as how their role has evolved, will help firms compete.

Chris Bull was among the first wave of legal COOs when he was promoted to the role at Osborne Clarke in 2000, having served four years as the firm’s finance director. This is a typical route into the COO position, given its focus on driving operational excellence. 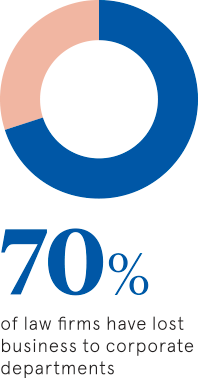 “Legal COO roles have delivered a number of different benefits to the firms that have created them,” says Mr Bull, who is now executive director at advisory firm Kingsmead Square. “At the core is giving rapidly growing and complex legal organisations the operational management backbone they need to evolve, but had previously lacked.”

The role was originally posited as a back-office position. While the COO manages the day-to-day activities of the firm, the managing partner and chief executive can focus their energies on strategy, deal-making and overall business opportunities and growth.

“When managed directly by the managing partner in firms with no COO,” Mr Bull adds, “the business support functions, on which a successful legal business relies, often tend to be poorly aligned and reluctant to operationally integrate in the most efficient way.”

Technology advancements have meant digital solutions are now the principal driver of efficiencies, building on the COO’s back-office maturation by collecting and analysing data to increase visibility across organisational workflows. This has freed COOs up to utilise the wide-reaching knowledge they have gained to shape the next phase of their business.

With many partners seeking to broaden the range of services their firm offers, they can no longer rely on their own technical skills to be the differentiator. Winning big opportunities will rely on presenting the full depth and breadth of the firm’s capabilities, as well as adopting business models and talent approaches that embrace new ways of working.

“COOs will need to transform the business services functions, so their firms can not only respond to these changes, but be competitive within a broader market,” says Rod Harrington, COO at Norton Rose Fulbright. “That includes recruiting the best non-legal professionals, developing talent, changing pricing models and ingraining IT in the commercial proposition, as opposed to just keeping the lights on.”

As technology continues to shape the organisational design of law firms in the next five years, legal COOs will take on a more proactive role in shaping strategy and growth, shifting their influence from the back office to the front. During this time, Mr Bull foresees three “flavours” of COOs emerging.

The legal operations COO will see firms follow the lead of corporate legal departments in hiring senior business professionals with a range of financial, commercial and operational skills to manage the business aspects alongside practice group heads. Responsibilities will include resourcing, pricing, profitability, analytics, project management and legal tech.

Growing law firms that deploy a more corporate approach to building scale are likely to opt for a managed service COO to establish a centralised shared service centre in a lower-cost location. While some of these COOs will be home grown, most will come from big corporations and outsourcing businesses with a track record of running large, multi-functional operations covering finance, human resources, risk, IT and more.

Finally, the innovation COO will become more prevalent, spearheading technology initiatives that position the firm for the future. Numerous chief innovation officers have already emerged in global firms in recent years and this trend is only set to grow further.

“In some cases these new roles are being filled by lawyers, often from the partner ranks,” says Mr Bull. “But in other cases they are a natural development for COOs who have cut their teeth managing and improving law firm operations. They have a greater insight than most for where improvement and change is needed, and how it can be achieved.”

The common denominator across all three roles is ownership of the innovation agenda. As COOs become an increasingly crucial driver of transformation, potentially even taking on a customer-facing dimension to shape operational models around client needs, firms need to ensure they’re able to attract and retain the best non-lawyer talent. This means a seat at the top table and challenging structures that have historically prevented non-lawyers from becoming equity partners.

With operational excellence central to legal success in the years ahead, firms must act now to position innovative COOs at the heart of their business.