It was only a few years ago that a chief executive could stand up and point to an overhead projector displaying a PowerPoint presentation to boast the company was now “mobile first”. Few would have thought it odd the projector was connected to a laptop, which somewhat undermined the message.

That won’t wash anymore. The bring-your-own-device revolution, with staff favouring their own smartphones to company issue, flushed out any notion that firms could talk a mobile strategy without really having one. And the world is only moving more mobile, more quickly.

Companies ranging from Apple to Uber to ASOS are now totally dependent on smartphones and most successful businesses will be those that have been “born mobile” or have managed to transform themselves to fit on the small screen.

Government figures suggest a third of small businesses have still not tailored their websites to work over mobile. This can have disastrous effects after Google adapted its algorithms in April to prioritise websites that have been optimised for the smartphone screen. The move was dubbed “mobilegeddon” for those companies that have not caught up. 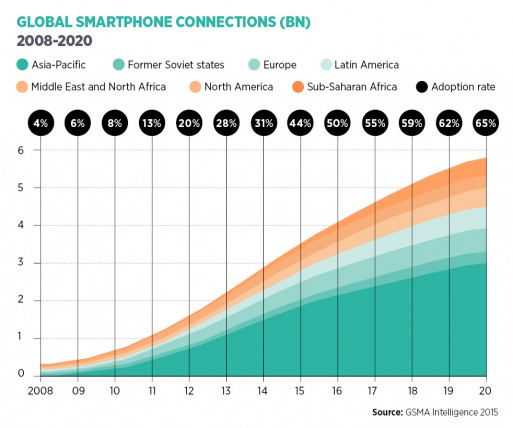 The latest Ericsson Mobility Report makes for grim reading for any business hoping to succeed without a defined mobile strategy. There are 3.4 billion smartphones in people’s pockets this year which is 1.2 billion more than last year. That will rise to 6.4 billion by 2021 when 85 per cent of all subscriptions will be defined as “mobile broadband”.

By then, countries including Japan, South Korea and the United States are expected to have forged ahead with commercial 5G launches, which will provide another quantum leap in mobile connectivity in terms of speed, capacity and functionality.

A truly mobile-first strategy can have as dramatic an effect for many businesses as the introduction of computers. Although the world occasionally tilts back towards older methods – the fervour for vinyl records rather than Spotify subscriptions for example – it would take a brave entrepreneur to ignore the potential of smartphones can have both internally and externally.

Mike Gregoire, chief executive of CA Technologies, puts this into perspective. “Fifteen years elapsed between the introduction of the personal computer in 1978 and the first internet browser in 1993. From the internet browser to Facebook took only about nine years. And this rate of ‘innovation compression’ is getting faster,” he says. 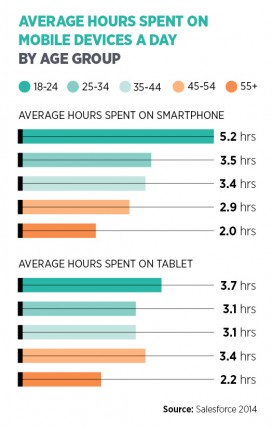 “The first true smartphones came out in the mid-2000s. It took only five years for the sharing economy to appear. You have to catch the wave when it hits – or risk being left behind. The window of opportunity to surf the wave is getting shorter.

“History books are filled with tales of big companies that were once stalwarts, but misjudged the rate of innovation compression. Today innovation is incredibly democratic – and fast. And it radiates at an exponential pace.”

Phil Mottram, enterprise director at Vodafone, says many companies remain concerned about cost in signing to take advantage of 4G connectivity, but that is a false economy as customers now expect constant attention and demand for more flexible working practices only set to grow.

“Customers’ expectations are growing. They increasingly expect round-the-clock, quality service. The proliferation of mobile devices and social media have transformed customers’ expectations when engaging with brands. We now operate in a 24/7 environment where speed is of the essence,” he says.

“If businesses don’t keep pace with their customers’ expectations, they risk falling behind their competitors and potentially losing business to their more tech-savvy counterparts.”

EE, the largest 4G network in the UK, argues that 4G has had a more profound impact on the business market than it has with consumers. It says data usage for consumers has increased four-fold with more people watching YouTube, Netflix or Sky Go on their phones and tablets.

That pales in comparison to businesses where data usage has risen six-fold. Half of those companies – 8,700 at the last count on the EE network – say 4G is now critical to their competitiveness, while two thirds say the faster network has boosted productivity by at least 10 per cent.

There is not an industry that cannot benefit from an advanced mobile strategy and whole industries have been “disrupted” by the impact of a new generation of businesses which have been born mobile, such as Uber, Airbnb and Shazam. ASOS, for example, has revealed that 60 per cent of traffic to its website is now from mobiles, with 44 per cent of sales booked on the move.

Yet the impact of mobile goes well beyond that of online shopping. Housing companies such as Green Square have used 4G at construction sites to speed up the time it takes to break ground. Traditionally they would have to wait for a fixed broadband connection to be installed. The company believes that up to 2,000 more new homes will be built as a result in 2016. London’s Air Ambulance, which uses EE’s 4G network, has sliced as much as two minutes off its dispatch times – more efficient but also a matter of life and death in this case.

It may feel like a whirlwind keeping up with the smartphone sector with companies confused about whether to develop an app, optimise an existing site and what to do about emerging trends such as ad blocking. Yet mobile needs to be at the heart of strategy for almost any business, large or small.

“We use our pocket-sized devices for working on the go, shopping for shoes, hailing taxis, making sure we don’t get lost and posting for our legions of social media followers. We’d be lost without our smartphones,” Vodafone’s Mr Mottram concludes. “With this in mind, any business that hasn’t considered its mobile presence is going to fall behind.”