Incubators, co-working, hot desks, collaborative working and shared environments, while still only a fraction of the total London office market, are highly desirable and attractive to employees, particularly the young.

As such these new aspirational spaces are setting the benchmark for what the workplace should offer and what it should look like. And in the war for talent, that means all employers are having to respond.

The Office Group, which focuses on providing design-led shared workspaces with 30 office buildings in London, has grown rapidly in the last few years from 100,000 sq ft in 2010 to 900,000 sq ft and says this is all driven by demand.

It is not just digital startups and gig-economy entrepreneurs that want to work this way. There is also a lot of interest from for larger corporates. AOL, Compare the Market, Dropbox, Facebook, NetMums and a host of well-known names are also taking spaces, which is reflected in the average deal which is now for twelve people, up from five in the last few years.

“Our spaces might be cooler than theirs,” says Olly Olsen, The Office Group’s co-chief executive. “They may also want to attract talent to a particular team, so the right environment is key. Or they may want to move a particular group away from their headquarters to somewhere more collaborative.” 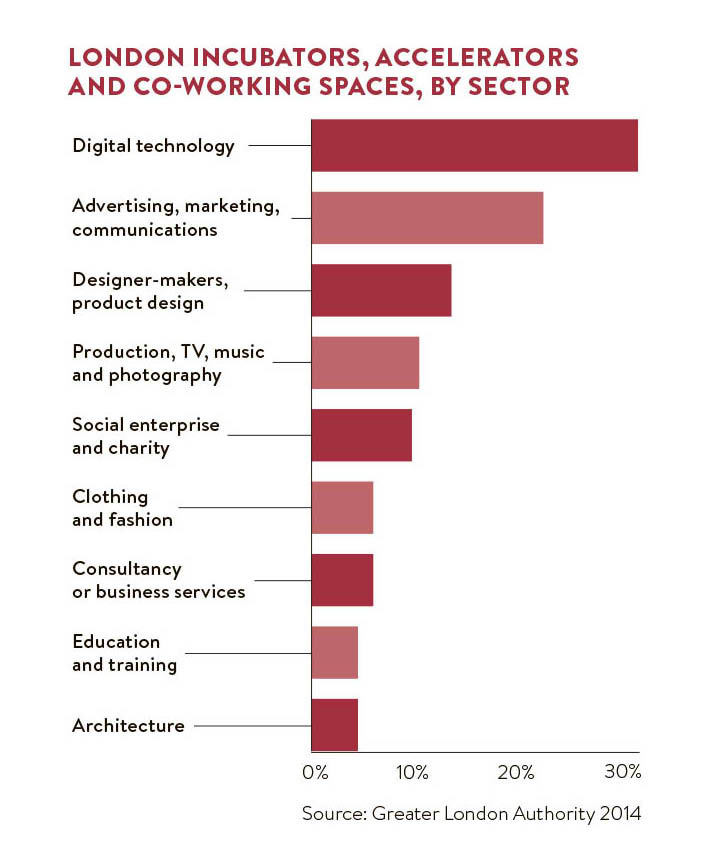 At the other end of the size spectrum, sole traders also increasingly want the buzz of a co-work or collaborative space. “Home-working does not appeal to everyone, particularly younger employees, because they want social interaction and more human-to-human contact,” says Mr Olsen.

The other shift is the erosion of traditional business district boundaries, such as advertising having to be in Soho.

“Businesses are certainly being more geographically adventurous, when it comes to choosing a location,” says Matthew Bonning-Snook, a director at Helical Bar. “Take our Shepherds Building in W14 or Loom in Whitechapel. We are attracting a lot of young businesses with a young workforce to these areas and they are prepared to be bolder in their decisions regarding location, so that they can be based in a vibrant community – a hub where they can socialise as well as work.”

Such is the desirability of the right work environment that a third of staff can’t wait to move, according to a recent survey of 1,000 UK employees by Morgan Lovell.

“Many offices are just not fit for purpose,” says Mat Oakley, research director at Savills. “Finding a quiet space to work in the office is increasingly difficult as many open-plan buildings are just too noisy. Just look at the number of people working with headphones on. They can’t work at work.”

Ditching impersonal outdated, open-plan floors and replacing them with something that resembles a more collaborative environment, complete with huddle spaces and quiet zones, can have its challenges.

“Where people start to share space, it is essential for them to get along,” says Alissa McNally, community manager of The Office Group. “Creating a vibrant office is not just about designing rousing interiors and architecture; the key here is to create a community and there is a fine line between buzz and distraction.”

There is an added benefit to adopting these smarter, newer ways of working as the space can work harder. Take RSA as an example. With 55 per cent of desks empty at any one time in most offices, employers like this insurance giant are increasingly looking at ways to maximise usage, minimise floor space and improve productivity.

Terri Wade, RSA’s group head of employee engagement, explains that when the company’s lease was up for renewal two years ago, it was an opportunity to bring together three different London sites and implement flexible working to lead to improved cost-savings, increased sustainability, innovation, communication and collaboration. With ten workstations for a team of twelve – some employers are aiming for even less – in its new home at the Walkie Talkie Building, RSA saw almost immediate results.

“After a few months we carried out a sensor test on all desks, meeting spaces and free areas, and found that on average we had 65 per cent occupancy, well above the market average,” says Ms Wade.

While millennials – twenty and thirty-somethings – may prefer to work in newer ways, those who have been in the workplace longer can find it harder to adapt so this can be a challenge.

While demographics are dictating the look of offices and the lifestyle they can offer, it is economics that is dictating where offices are based

“We always knew some people would find it hard to relinquish ‘their’ desk, but we are noticing our residents are seeing the benefits of moving around and spending time with other people in the team,” says Ms Wade. “A number of our senior leaders no longer have their own office space and have removed some of the desk dividers to create even more open space to collaborate with their teams.”

The changes have gone down well. In its 2015 annual opinion survey, London-based employees cited the working environment as one of the top-three things they liked best at RSA. If any employer still believes that new ways of working are just a fad, they should heed this warning.

“Britain’s workers are on the move like never before and the office plays a significant part in their decision to leave,” says Alex Colvin, leasing director of British Land. “More than half of millennials say they have moved jobs for the office location and features, and it is a growing issue. They want a lot going on in the area, from restaurants and bars to gyms, as well as great connectivity. If employers get this right, they will retain their talent with 86 per cent saying they would stay longer with an employer.”

While demographics are dictating the look of offices and the lifestyle they can offer, it is economics that is dictating where offices are based.

Commercial real estate adviser Bilfinger GVA highlights just how total occupier costs have increased – up by 36 per cent on the previous peak in 2007 in the West End and 15 per cent higher in the City. Total occupancy costs are now ranging from £55.25 per sq ft in Stratford, East London, to £177.17 a sq ft in Mayfair and St James.

This is squeezing startups and small and medium- sized businesses, which account for more than 90 per cent of all businesses in London, which are opting for newer-style flexible workspaces for economic reasons, rather than the need to have somewhere cool to work.

“There has always been a movement out of London – look at the M4 corridor,” says Richard Morris, chief executive of Regus. “However, we are finding that anywhere that is 20 minutes to half an hour from central London is now a growth market because it is more affordable and you can still find the staff.

“We have new developments in Gerrards Cross and Ashford, but commutable towns and cities, such as Maidenhead, Woking, Guildford, Croydon, Watford and St Albans, are all attracting both startups and firms moving from central areas.”

Despite rising rents, very few premises in London are vacant. So firms are looking further afield. Tom Ashby of the regeneration charity the Centre for Engineering and Manufacturing Excellence says affordability is key.

“Most flexible offices require a 12-month commitment, but many startups cannot look that far ahead so we are offering one-month rolling contracts at our new Launch Pad innovation centre, which will help 20 early-stage tech businesses,” he says.

Alexander Shey, chief executive of award-winning startup Vantage Power, which is turning London’s diesel buses green, says being in London is vital because it is where the company’s customers are.

But this tech startup chose to be based in Greenford, closer to Hounslow than Hoxton. Having an office in a bus, pizza Fridays, weekly five-a-side football games and a commute “against the flow” means the firm can still attract talent. “We are near enough to London,” says Mr Shey. “But we can afford a great facility for a fraction of the cost of a Shoreditch pad.” 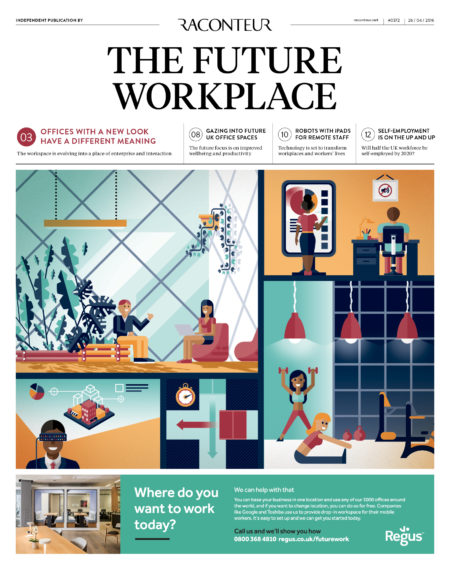