Considerate Constructors Scheme (CCS) accreditation has become the premier validation for construction firms and a standard bearer for an industry that has reinvented itself.

The image makeover for construction began back in 1994 with the government-backed Latham Report, commissioned to investigate perceived problems in the industry, which its author Sir Michael Latham described as “ineffective”, “adversarial” and “incapable of delivering for its customers”.

“Things were bad and they needed to change,” says Edward Hardy, chief executive of the Considerate Constructors Scheme. “And change would either have to be brought about by legislation or through a voluntary code of practice.”

The industry chose the latter, which in 1997 became the “rock” on which the new CCS was and still is based. The scheme’s objectives are simply to improve the image of the industry and encourage best practice beyond statutory requirements.

It has three categories. The first is the environment, where the onus is on the industry to do everything possible to avoid negatively impacting the green environment and nature.

The second category is the workforce and it is here that, arguably, it has brought about the biggest changes.

“Historically, construction hasn’t had the best reputation for looking after its workers,” says Mr Hardy. “Sites were dangerous and dirty, they lacked proper facilities, and there was a general disregard for staff wellbeing.

“The last 20 to 30 years have seen a major cultural shift in the business. Healthy lunches and shower facilities have become standard on sites. CCS members are fantastic employers who genuinely care about the welfare of their staff.”

The third category is the general public, and here the ethos is to create a positive impact for local communities, direct neighbours and society in general.

In terms of addressing poor public perceptions of construction, the scheme has done its job. Now Mr Hardy believes it is time to take things to the next stage.

He says: “Talking about improving a negative image is by definition a negative statement. We are actually well beyond that stage. With the work that has already been done, we should be promoting the industry’s positive image.”

And thanks to the CCS, there is plenty to promote. The real key to its effectiveness as a catalyst of transformation lies in its function.

Far from simply being a branded accreditation logo that companies, site operators and individual tradespeople can add to their website, van livery and business cards, CCS accreditation standards have to be reached and maintained through regular site monitoring.

CCS representatives make 15,000 site visits every year. If standards are found to have slipped, the scheme offers practical suggestions for restoring them and striving for continual improvement.

The outcome has been astonishing, yet early on the industry was quite resistant to the idea of an image makeover.

“When the scheme was first launched, it was seen by some as just another layer of red tape. Others were actually insulted by the idea of being assessed as considerate constructors. Now it has come full circle and the vast majority of major contractors register all of their sites with us,” says Mr Hardy.

To date the scheme has accredited around 90,000 construction sites, including the lion’s share of the UK’s largest sites, as well thousands of individual companies and suppliers.

“There is a compelling business case for gaining a CCS membership,” says Mr Hardy. “They are winning new business by including our accreditation in their proposals to new clients. It is mandatory for some clients, as is a minimum score. It can also help with the planning process as registration demonstrates a commitment to adding social value and minimising inconvenience for the local communities.

“They are also better able to attract the talent they need. Offering a caring, considerate, and pleasant place to work will lead to more people considering a career in the industry.”

“In a way it is the smaller end of the business that has suffered most from a poor image in years gone by,” explains Mr Hardy. “As the market recovers and building activity gathers pace, these smaller firms can also have the validation or proof they are working to standards way above those required by statutory legislation.”

And evidence that construction sites and companies are actively promoting the new image can be found in the neighbourhoods and communities in which they work. 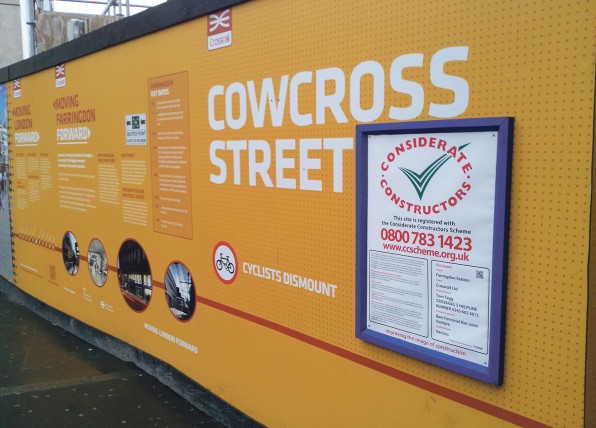 Mr Hardy says: “As part of the strategy of promoting a positive image, rather than dispelling a negative one, we started asking construction sites, ‘What are you doing for the local community?’ Many are now leaving positive legacies when they have packed up their tools and left the site.”

These range from revamping community play areas and landscaping local amenities, to open days, and family fun days; things that are remembered in a positive light long after the construction crews have departed.

But the real legacy lies in the future, as the CCS plays a key role in making construction an exciting, challenging and rewarding place to work for the next generation of employees.

Mr Hardy concludes: “Everybody knows how important this sector is to UK GDP – contributing around 10 per cent – and therefore to future economic growth, but the industry is already battling serious skill shortages and has to find a way to attract new talent, now and in the years ahead.

“We are working with the industry, going out to schools and universities to speak to young people, getting the message out there that construction is not just about laying bricks – although that is a vital skill. It’s about technology, design, and artisan crafts and trades; it is well paid and, for the best people, the opportunities are endless.

“The construction industry has a big heart and an incredible image. It just needs to get better at telling its story. We are playing our part and our hope is, in the next four or five years, it will all come to fruition.”
www.ccscheme.org.uk

Constructing an industry for the 21st century

Why a career in construction?

Also in Future of Construction 2015