If you want an example of how corporate philanthropy has changed in the past ten years, look no further than Stephen Uden, head of corporate citizenship at Nationwide.

“We want to focus our efforts on issues facing our customers, and work hand in hand with charitable organisations to maximise their social impact and build towards fundamental change – to an extent that neither of us could achieve on our own,” he says. 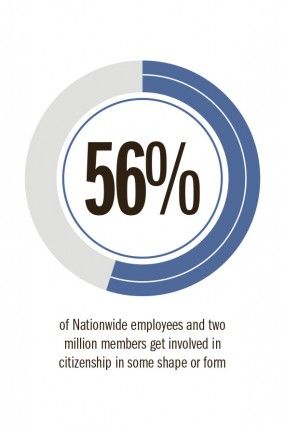 “While our focus is largely led by our members and employees, my litmus test has always been ‘if you went out of business overnight, would people miss you?’ Particularly with our longer-term partnerships, they would, because we don’t just provide funding, we get stuck in through volunteering, skills training and knowledge sharing too.”

Such firms leading the charge on corporate philanthropy now manage this work in the same way as they would HR, IT or finance. They have long-term plans, a set of goals, scorecards to measure their progress and performance reviews to reward or chide their efforts.

It was Nationwide’s approach to corporate philanthropy that attracted Mr Uden to the job two years ago. “A leading UK organisation, headquartered here, with the chief executive’s office a stone’s throw away, and that was driven by its members and not by the need to boost its reputation,” appealed to him.

“The first question anyone asks themselves when making a business decision is ‘what would our members want us to do?’ For a corporate responsibility professional, that is absolute heaven,” he says. “I wasn’t sure before I joined whether ‘putting the member first’ would really change the way people work, but it does.”

We don’t just provide funding, we get stuck in through volunteering, skills training and knowledge sharing

To make his point, Mr Uden describes a Community Match programme where members and employees nominate local charities for support. “We’ve had over a million votes supporting charities and get over a thousand nominations a month,” he says.

Nationwide’s members also voted in 2007 that 1 per cent of pre-tax profits should go to good causes. “And that’s what funds and drives the strategy, and our staff help us deliver it – more than half are now involved,” he adds.

Beyond employees and members setting the strategy, Mr Uden’s work rests on two other principles: activities must align with Nationwide’s business and must focus on the long term. So it makes sense that Nationwide has worked with housing charity Shelter for the past 14 years. The latest four-year partnership aims to help 16,000 people find a home of their own by 2016.

“It’s not just giving money to Shelter, although we do; we’ve worked with them to influence the way we do business, from giving our buy-to-let customers the option to offer longer-term tenancies, to providing independent online guides for tenants, landlords and armed forces personnel. We hope others will follow suit,” he says.

“Working together, our charitable partnerships can make a real difference – far more than a cheque donation ever could.”