When Formula E launched in 2012, few thought it would get off the ground because of its reliance on unproven technology, but it has succeeded due largely to the drive of one man – Alejandro Agag

Motor racing may seem to be one of the most pioneering sports, but in fact it is far from it. The basic principle of driving on tracks and trying to stay in front has been practised for more than a hundred years and now the sport thrives on repetition.

Whether it is drivers testing their cars or racing in a simulator. Whether it’s the pit crew practising pit stops or the model of the car being tested in a wind tunnel. The wheels of motorsport turn because the participants practise the same thing time and time again. It makes the industry ripe for innovation and this is where Formula E comes in.

Formula E was created to address many of the biggest criticisms levelled at motorsport. There are no carbon emissions from its cars and no complaints about the piercing screech of an engine as it has been replaced with the quiet hum of an electric motor. The organisers generally don’t even ask venues to pay a hosting fee to stage its events as is common with most high-level motor races. It is a bold gamble and a lot is riding on it. Not only could Formula E change the face of motor racing, but it could also be just what is needed to drive sales of electric cars.

Formula E’s chief executive Alejandro Agag is a former owner of a successful team in Formula 1’s junior series GP2, so he hardly has hippie credentials. The suave 45-year-old is an economics and business studies graduate from the Colegio Universitario de Estudios Financieros in Madrid, and is fluent in Spanish, English, French and Italian. He first made his name in politics and in 1999, aged just 28, he was elected as a member of the European Parliament. He entered the economic and monetary affairs commission and focused on anti-trust policy.

Although Mr Agag stepped down just two years later, his time in politics introduced him to an important person in his life – his future wife. He became somewhat of a celebrity in Spain as in 2002 he married the daughter of the country’s former prime minister José María Aznar in a ceremony attended by VIPs including Tony Blair and Rupert Murdoch. As well as owner of GP2’s championship-winning Addax team, he also became a board member of Premiership football club Queens Park Rangers. But a chance meeting in early-2011 gave him new drive.

“It came out of the blue, at a dinner in Paris,” says Mr Agag. “I was at dinner with Jean Todt [president of motorsport’s governing body the Fédération Internationale de l’Automobile (FIA)] and the vice president of the European Commission, who is a good friend of mine. He started talking about the European Commission pushing electric cars and Jean Todt was also saying that the policy of his presidency of the FIA is clean mobility. So I wrote on a napkin that we should do an electric car championship.”

Scrawled on the napkin were the pillars which became the foundation of Formula E. “I wrote on the napkin that it would be great to do a championship with electric cars; that I have to check on the technology; I have to race in the cities; and that the motor industry is going in that direction. That was the napkin. It was historic.”

Without Mr Agag knowing, the FIA was already investigating the possibility of creating the world’s first all-electric championship and in April 2011 it was announced. Mr Agag put in a bid. In August 2012 the FIA rubber stamped his plan.

Through his work in motorsport, Mr Agag came across French company Formulec which made the only single-seater fully electric racing car. He got an estimated €70-million investment from Spanish real estate developer Enrique Banuelos and bought Formulec. The two businessmen set up Formula E’s Hong Kong-based parent company and Mr Agag says that “Enrique immediately understood the idea”. He adds: “We bought out Formulec which made the first prototype single-seater full electric racing car. We needed this because if we didn’t have a car, we would not be credible.” That was just the start.

Mr Agag got together the great and the good of motor racing to collaborate on the end-product. McLaren, the championship-winning F1 team, makes the car’s 300bhp electric motor. Former F1 supplier Michelin provides the tyres, while another F1 team, Williams, supplies the batteries, and Renault is the technical partner of the series. It wasn’t smooth running.

“There were many times when I thought it wouldn’t get off the ground. The lowest point was when we lost our battery supplier. Before Williams, we made a deal with a major manufacturer for the battery, but the deal dragged on and was never signed. Six months before we should have had the prototype car, we lost them and it was a catastrophe. Without a battery there was no championship. We even thought it may be impossible to do because these guys had said they were not capable of doing what we wanted. That was the lowest point. By that time we had invested many millions in the project so it was really tricky, but then Williams stepped in.”

Williams is not just a championship-winning F1 team. It also has an advanced engineering division which applies F1 technology to other fields. In 2010 it began a technical partnership with Jaguar on its C-X75 supercar which was powered by a turbo-charged 1.6-litre petrol engine as well as two electric motors. Although the brakes were put on the project in 2012, Williams had already done the groundwork on the batteries to power its motors.

“Williams stepped up to a really difficult technology challenge and made it. All the cars work all the time. Cars don’t stop on the track,” says Mr Agag.

The one catch is that the Formula E cars can’t make it through an entire race on one battery due to the demands of the motor. Even the most cutting-edge batteries simply aren’t up to it and they can’t be swapped mid race due to the strict safety guidelines which require them to be fully insulated. Instead, cars are swapped during the race, which some say highlights the limitation of electric cars. The level of interest in Formula E suggests otherwise.

In 2013 Formula E signed a broadcast deal with Rupert Murdoch’s Fox network which shows the races in the United States and more than 80 other territories. In the UK it is shown free-to-air on ITV to give maximum exposure and a worldwide television audience beyond the dreams of most new racing series.

Having cars which produce no emissions and make no noise helped Mr Agag sign deals to race in the most glitzy city-centre locations, including Long Beach, California, London, Miami and F1’s heartland of Monaco. Being in the middle of cities shows off the local landmarks which in turn drives tourism. Green credentials also attracted a glittering line-up of team owners from Audi and former F1 champion Alain Prost to Sir Richard Branson’s Virgin Group and Hollywood star Leonardo DiCaprio. 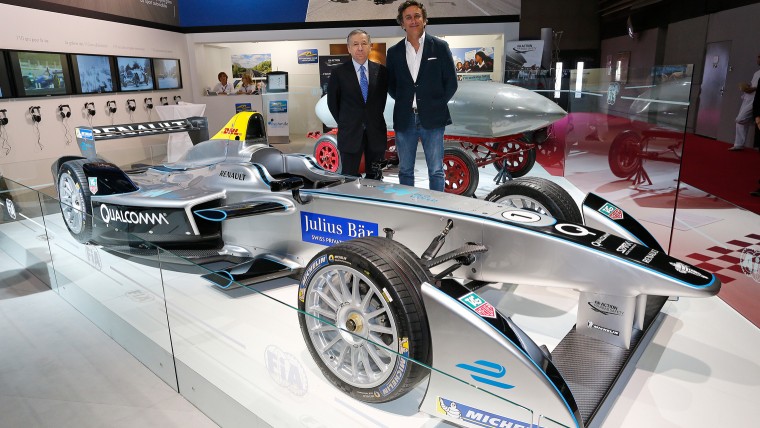 Sponsors were soon attracted to the series and it is still signing them up with two of the most recent additions being Swiss bank Julius Baer and financial services firm Visa. “The reason these companies are with us is that they care about the environment. They have a corporate social responsibility policy which is part of their DNA. They believe in it and they think it is also good for business,” says Mr Agag.

“So having a championship that also represents those values – it is a very strong association. It would have been impossible for any other asset, without a track record as we had, to sign those kinds of deals. We were able to sign them because of the sustainability concept. That is really our strongest point and the second strong point is racing in the cities. Sponsors and partners really think that is very important. We are becoming an urban world, so to find a solution to what is happening in the cities is very important and electric cars are part of the solution.”

Perhaps the biggest vote of confidence is that Formula E managed to secure fresh investment before it had even hosted its first race. In December 2013, Mr Agag and Mr Banuelos sold around 10 per cent of their company to Causeway Media Partners, an American fund founded by venture capitalist Bob Higgins along with Wyc Grousbeck and Mark Wan, the co-owners of the Boston Celtics, the most successful team in the NBA basketball league.

Since then other investors have joined including mobile technology firm Qualcomm and the pairing of broadcaster Discovery Communications and media mogul John Malone’s Liberty Global. The latter invested in March and is now Formula E’s largest shareholder, though it does not own a majority stake. There are six other owners, with Mr Banuelos and Mr Agag holding the biggest stakes.

Looking to the future, Mr Agag says that in five years battery power will have improved so much that the cars will either be able to travel twice as fast or twice as long, thereby making the mid-race car change redundant.

He adds: “The five-year plan is to add a few cities and especially to get manufacturers in. Now we have two with Mahindra and Renault. I think we will have one for sure or maybe two next year. The plan is to maybe have four. I’d like to have a German one, a Japanese and an American.”

Mr Agag concludes: “It will take time for everything in life to be electric, but at some point it will be mainstream and we will be there. So basically the key to success for us is long-term survival.”