Construction is an industry with an image problem – it is seen as old-fashioned, low tech, with little job security and no career progression.

At the same time, the construction industry is facing its biggest challenge since the Industrial Revolution, according to the Construction Industry Training Board (CITB).

Impact of the recession

There is a skills gap right across the built environment, says David Picton, chief sustainability officer at Carillion, one of the UK’s biggest construction and facilities management groups. “That starts with a shortage of people entering the building trades, which has happened for a number of reasons.” 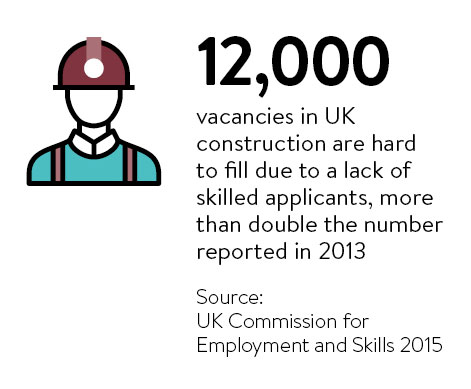 These include the recession that has gripped the sector for the last six years, which led to large numbers of older workers leaving the industry, and a focus in the education sector on degrees and the academic route to qualifications that has led people away from the industry.

“In a recession, construction is always the last industry to slow down and the last to pick up,” Mr Picton says. “Workers left the industry and, at the same time, young people were not inspired to join to replace them. The pipeline of talent dried up.”

CITB forecasts show that the industry needs to fill 232,000 new jobs in the next five years to deliver the pipeline. In addition more than 400,000 skilled workers will hit retirement age in the next decade and will need to be replaced. Innovations in technology and new ways of working also mean the industry will need to develop new skills.

“Our industry is facing a perfect storm,” says Adrian Belton, chief executive of the CITB. “The UK infrastructure plan, a housing boom, and the importance of developing new ways of working and embracing new technologies are combining to create demand for more skills, new skills and higher level skills.”

There are just not enough people, says Graham Edgell, director of sustainability and procurement at Morgan Sindall Group. “It’s a huge issue across the industry. The industry has moved on and there has been a recession in the sector for the last six years. Training has almost halted.”

The average age of an excavator driver is 56, he says, while for bricklayers and other specific trades, “the standard and volume are not there”. The problem has been disguised to a certain extent by an influx of labour from other countries in the European Union that has filled the gap.

Mr Edgell says: “In housing alone we probably need to create apprenticeships and openings for about 5,000 people per year just to get things underway. Until that happens, the situation is going to get worse. It is the collective responsibility of the whole industry.”

However, there have been problems with creating enough apprenticeships because “the consistency in workflow is just not there to support it”. The flip side, he says, is that the very notion of apprenticeships has been devalued.

“They’re almost like work experience schemes now, rather than the old apprenticeships that turned people out through colleges. The standard is not high enough. You get someone on site for four to six months and then say they’re qualified, but they’re not.”

The skills shortage is having a real impact on building firms, increasing costs and causing delays to projects.

One key problem for the construction sector is that it has not been seen as offering attractive career prospects. “To be a sustainable industry, we need to be a lot more attractive and show people there is a career path at every level,” Mr Edgell says. “As an industry, we are world leaders, but to maintain that position we need business to pick up and we need to understand the way the education system worked in the past is no longer there.”

A range of new skills are needed for the future, adds Di Thornhill, human resources director for the UK, Middle East and Africa at engineering consultants Arup. For example, in 2011, the UK government announced a Building Information Modelling (BIM) strategy that required the use of collaborative 3D BIM on government projects by 2016. BIM involves creating and using intelligent 3D models to develop and communicate project decisions.

The rise of digital construction, off-site manufacture and other modern methods of construction, increase the appeal of the industry to groups that have traditionally been difficult to attract, says the CITB, but they also change the range of skills the industry needs.

“A lot of young people are genuinely excited about using technology and tools like 3D drawing technologies and even things like drone technology, which more and more contractors are starting to use,” says David Light, BIM consultant at Autodesk. “There are absolutely massive opportunities out there.”

“We’re moving into a technological era where skills like digital construction are becoming key,” says Ms Thornhill. “Things like eco-cities require a more holistic set of skills and people who can take a broader view.”

But, says Mr Light: “Construction is not seen as a tech business. It’s still seen as old school.”

Part of the problem is that schools and universities still take a traditional view of careers in the engineering industry, Ms Thornhill adds. “We suffer a bit from the perception of engineering. We’re becoming aware of the need to get in earlier in the education system and show what a role in the industry could look like. When we tell people about the tallest buildings in the world, they’re pretty wowed by that – it can be very inspiring.”

For Carillion, part of the answer is to cast its net wider in its search for talent. “We have had to change our perception of the people we look at,” says Mr Picton. “We have to convince people this is a good sector to get involved in over the long term. We have also had to look at areas of the talent pool that are often overlooked.”

This includes people who have been homeless and ex-offenders; Carillion has been involved in a campaign called Ban the Box to remove the criminal conviction tick box from job application forms.

“Banning the box enables ex-offenders to compete fairly for jobs based on an assessment of their skills first, alongside regulated disclosure and barring service checks. Participating employers are able to find people from a wider pool of talent, while also contributing to reducing the estimated £11-billion annual cost of reoffending,” the company says. It also targets ex-service personnel and reservists, with a target to employ 300 reservists by the end of 2016.

In addition, it is working to get more women involved in the industry, in part through its involvement in Your Life, a three-year campaign which aims to show young people, especially girls, that the mathematics and science students of today will be the chief executives of tomorrow. “We think it’s our social responsibility to do these things, but it also brings more diverse thinking to our business,” says Mr Picton. 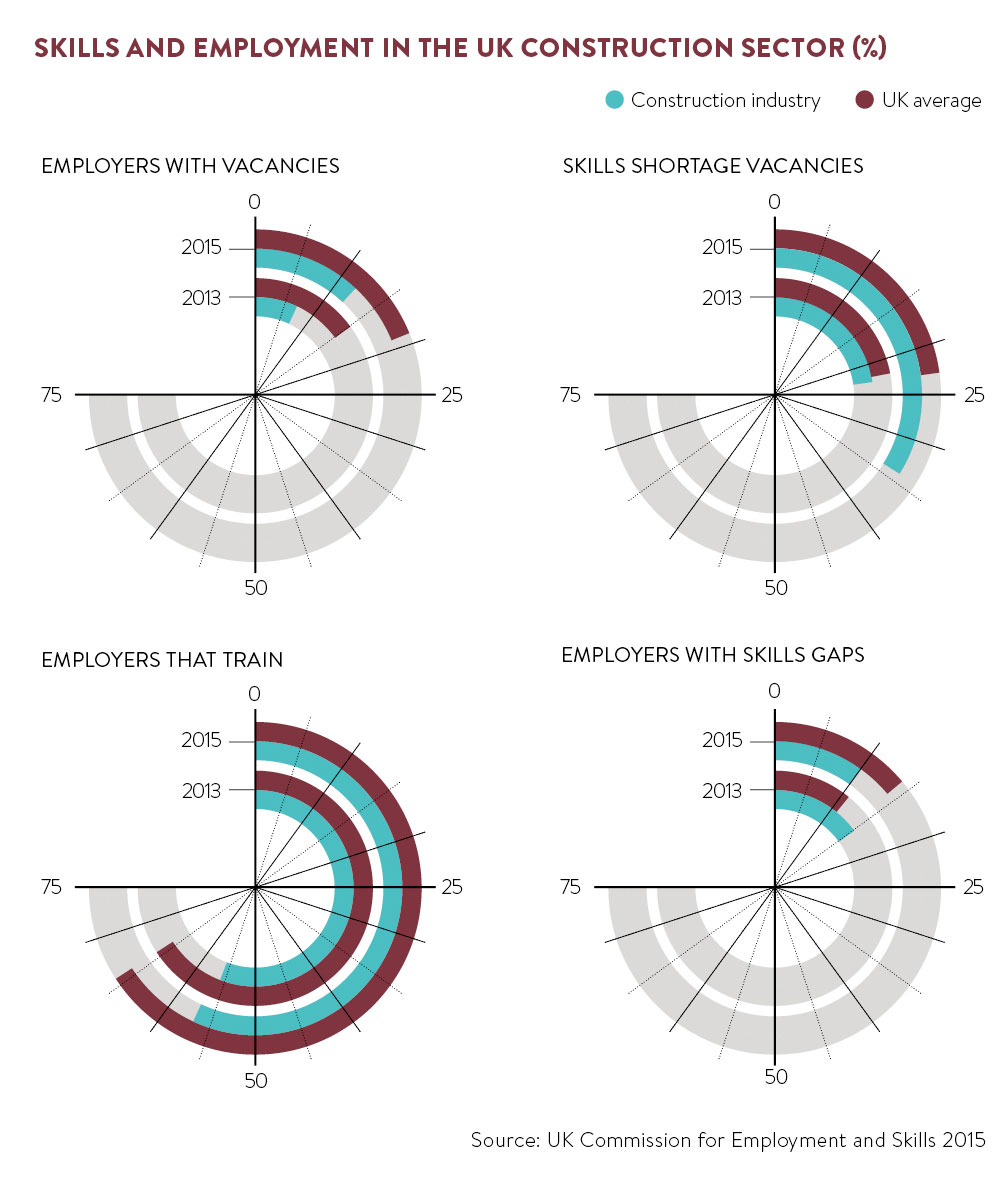 Carillion is reviewing its policies and processes on maternity leave, and for people later on in their careers who may have more responsibilities for caring, as well as giving staff six days a year time off to do voluntary work. “Volunteering gives people more personal skills and a greater understanding of society. These softer skills are becoming increasingly important,” he says.

“This is the new normal. Any sense that we can just put a few sticking plasters over this is naive. It’s a permanent change in thinking about how we develop people.”

Mr Edgell concludes: “The industry really needs to change its image. The challenges we are dealing with should be exciting enough to attract new people. Everyone is thinking about this and talking about it. It’s time for action now.”