Is the screeching sound coming out of Westminster the brakes going on, or the drawbridge coming up? Several British newspapers have reported this month that the UK could win an “emergency brake” on immigration – essentially a temporary exemption from the EU’s rules on freedom of movement, available for seven years, citing anonymous diplomatic sources. This would be a colossal concession, driven by the desire to keep the UK within the single market and cushion the impact of the Brexit vote on the Union as a whole.

Any such plan is likely to meet fierce resistance at the core of the EU, where freedom of movement is an article of faith. For many in Brussels, the choice has been all-or-nothing – to access the benefits of the single market means participating in the wider consensus on open borders.

For the British government, it looks like an early victory, showing that they can stop EU immigration and stay in the single market after all. Except that in all likelihood, the government could only step on the brake if the UK labour market comes under intense pressure from migration – which is unlikely to happen.

During the Brexit referendum campaign, the ‘Leave’ camp stoked the apparently widespread belief that migration, enabled by the freedom of movement that allows EU citizens to move to the UK to live and work, was crippling services and limiting employment opportunities.

The employment argument may not have held – NatCen’s 2016 British Social Attitudes Survey showed that around a quarter of people believed that unemployment would fall if the UK left the EU, while 46 per cent believed it would remain about the same. However, with the same survey showed how disaffected British people are with their services, which are increasingly overstretched due to years of austerity and the changing demographics of the country: an older population means more strain on healthcare and welfare. 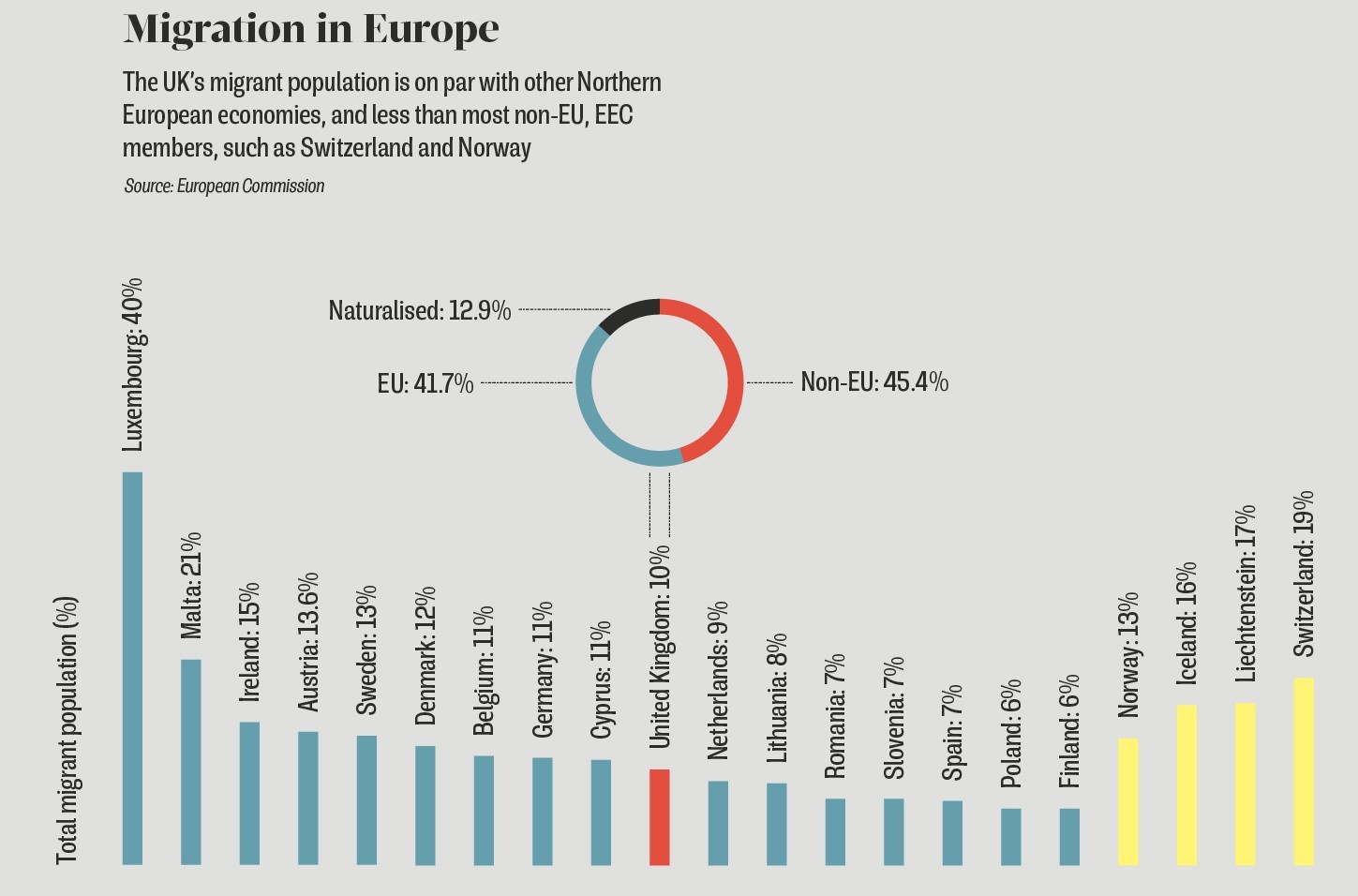 There is little evidence that migration from within the EU is a net drain on services, with most economic analysis suggesting that the additional cost burden of new migrants is outweighed by their contributions to the exchequer through taxes.

“Freedom of movement does not mean you can move somewhere to claim benefits, you can move to another EU state to study, to live – if you have sufficient funds – or to look for work. If people do not find employment within three months they can be made to leave,” says Maria Garcia, a lecturer in international relations at the University of Bath.

“Migrants do work and take jobs, but they also consume so they generate demand for goods and services, which will need inputs of labour. Of course, we cannot know how the UK would have fared had it never joined the EU. The fact of the matter is it did, and its prosperity has partly been linked to being part of that single market.”

Migration, then, is not really a labour issue, or indeed an economic one. After the Brexit vote, the government is left trying to solve the wrong problem because of what British people have come to believe, rather than what is true.

“I think one of the lessons of Brexit is that somehow we’ve lost the ability to communicate truth,” says Khalid Koser, chair of the World Economic Forum Global Agenda Council on Migration. “There’s an increasing gap between reality and perception. On migration, the evidence is clear that migration at worst is neutral, at best is positive, and yet there seems to be a kind of sense within the UK and Europe that migration is overwhelmingly negative.”

That is not to say that migration does not come with challenges; the problem is that relatively few of them are economic ones. Large influxes of people do cause social disruption, and it is difficult, if not impossible, to quantify the sense of lost identity that some communities apparently feel. In the short run, immigration is challenging, and who really has the patience to wait a decade for the dividends? In the aggregate, immigration is a net benefit, but what individual really experiences the aggregate?

In the meantime, rational discourse on the subject has given way to a highly polarised and charged debate with very little middle ground.

“There’s an increasing gap between reality and perception.”

“We seem to have lost the space to have an objective debate. You’re either at one end of the spectrum – migrants and refugees are heroes, and you have to protect their rights and save them – or you’re at the other, that they’re all here to take our jobs. The truth is somewhere in between,” Koser says. “We have to have the space to say: ‘generally, migration’s good. Sometimes it’s a challenge. Sometimes migrants come with good intentions; some people come because they want to take advantage.’ We seem to have lost the space to do that.”

This loss of political space has serious implications for what happens next, as policymakers have to balance often contradictory aims against an increasingly toxic backdrop.

“That is of course, always the key dilemma in politics and policymaking, but in this case it’s even starker, and tougher. Not least because it is not clear that sacrificing access to the EU single market – to the detriment of certain economic sectors – and reducing EU migration will create jobs in specific parts of the country. That is dependent on government industrial policy,” Garcia says.

“Ultimately it is the job of the government to choose which interests to support. Politicians have suggested that they will sign preferential trade deals with non-EU states. They will only be able to do that once the UK is fully out of the EU, and every single preferential trade deal creates winners and some losers in the signatory parties. In modern trade agreements, the losers – in Western states – tend to be the same groups who have lost out to globalisation, so the government will have to be very, very careful in crafting these when that moment comes.”

Photo by Richard Baker / In Pictures via Getty Images