Major strides have been made in the understanding of stroke in the last few years with significant advances in imaging and medicines. In particular, there are now four oral anti-coagulants to prevent stroke in atrial fibrillation patients on the market.

However, the innovation causing the biggest stir among stroke clinicians is thrombectomy, also known as mechanical clot retrieval. The technique involves inserting a catheter into a large blood vessel, usually in the groin, and locating the clot through a cerebral angiography; a device is then inserted through the catheter to pull the clot out.

At present, thrombolytics are used to dissolve blood clots, but these must be given within four-and-a-half hours of the start of the stroke and only benefit around one in seven people treated, according to the National Institute for Health and Care Excellence (NICE).

Thrombectomy has impressed clinicians treating patients with larger clots, which are likely to lead to greater disability due to blood flow being interrupted for longer. Professor Tony Rudd, national clinical director for stroke with NHS England, says the technique is “top of the list” of recent innovations. “In the last 15 months, we have had five trials which have shown it is highly effective,” he says.

His enthusiasm is shared by Dale Webb, director of research and information at the Stroke Association, who says that “over the last year and a half, people have been whooping and cheering on the floors of medical conferences” as thrombectomy data is presented.

In a Canadian meta-analysis of eight trials involving more than 2,400 patients presented in April last year, for example, thrombectomy was associated with much improved functional outcomes at 90 days compared with standard medical care using thrombolytics (44.6 per cent against 31.8 per cent respectively).

How many patients will benefit from thrombectomy in the UK is still unclear, but Dr Webb says: “If you are one of these patients, this is absolutely life-transforming.” 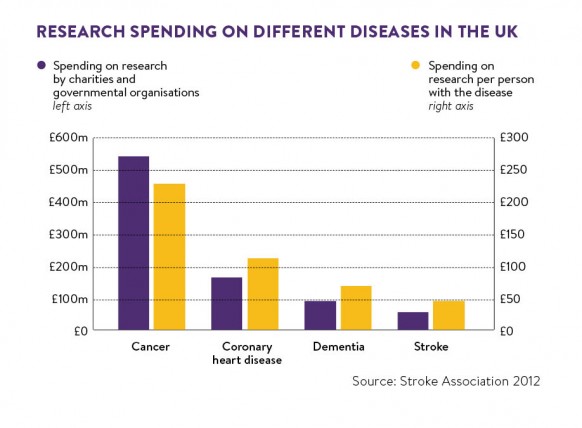 In February, NICE updated guidance backing thrombectomy, but a full technology appraisal is needed to get the mandate that would help get the procedure routinely commissioned across the NHS.

Professor Rudd also notes that the challenge is to get enough trained interventional neuro-radiologists to perform such highly skilled procedures. However, the cost of training staff and setting up dedicated thrombectomy units is less than the financial burden of having to treat people with long-term disability caused by stroke.

The use of stem cells

Another area causing excitement is the use of stem cells to reverse some of the disabling effects of stroke.

One of the leading lights in this field is Professor Keith Muir of the University of Glasgow’s Institute of Neuroscience and Psychology, who has been involved in a phase I trial undertaken from 2009 to 2015 involving 11 people with disabling long-term effects of stroke.

Cell-therapy approaches are probably acting by modifying the body’s response to injury, stimulating recovery and reducing harmful effects of inflammation

Different doses of cells were injected deep into the brain, close to the location of the stroke damage. He says: “We observed improvements in various abilities in several patients, which was interesting given how late after the stroke we included people.”

Professor Muir stresses that the study was not designed to demonstrate efficacy, “so these intriguing observations need to be further investigated”, he says. To this end, a phase II study has been running at a number of UK hospitals since mid-2014, which aims to investigate the recovery of arm function, and initial data is expected to be reported in around 20 patients this summer.

It is clearly early days, but Professor Muir says: “In general, it is now believed that cell-therapy approaches are probably acting by modifying the body’s response to injury, stimulating recovery and reducing harmful effects of inflammation.” The studies will give detailed information on the safety and feasibility of delivering cells by injection into the brain within a few months of a stroke.

A small study from Oxford’s Nuffield Department of Clinical Neurosciences found that patients who were given electrical brain stimulation alongside rehabilitation fared better than those on rehab alone. The trial, published in the Journal of Science Translational Medicine, involved 24 people who had strokes at least six months previously and still experienced difficulties moving their hands and arms.

The recovery of function in long-term patients is an important area, but with stroke, time is very much of the essence in limiting brain damage. Dr Webb at the Stroke Association points to a microwave helmet, developed in Sweden by Medfield Diagnostics, which is being trialled in ambulances and could slash diagnosis times.

Professor Joanna Wardlaw, chair of applied neuroimaging and head of neuroimaging sciences at Edinburgh University, believes the next big innovation will be treatments for small-vessel or lacunar stroke, which she says could also have a big impact on dementia.

A lacunar stroke is caused by damage to one of the small vessels deep within the brain and accounts for around one in four strokes. The British Heart Foundation, which is helping to fund a three-year trial led by Professor Wardlaw, cites researchers who believe it could be an underlying cause of at least 40 per cent of all dementias.

There is currently no approved treatment for a lacunar stroke and in the trial around 200 patients will be treated with either cilostazol, isosorbide mononitrate or both, two drugs currently used to treat angina and peripheral vascular disease. By performing MRI scans on people taking part in the trial, Professor Wardlaw and colleagues will monitor whether the drugs have an effect on the small vessels of the brain.