It’s fair to say the bold future of wearable contactless payments has taken a little longer to arrive than everyone expected. Conference after conference over the past five years has seen many a speaker eagerly predict that the world of Minority Report was just round the corner. The only people not in on the loop were consumers – and until people started listening to what they wanted, very little was actually happening.

This summer, however, Barclaycard rolled out the latest iteration of its wearable bPay payment devices, following a successful launch of the payment wristband last year. bPay’s heart and soul is a digital wallet linked to one of three options – a wristband, fob or sticker – which can be used to make payments up to £30 wherever contactless payments are accepted. 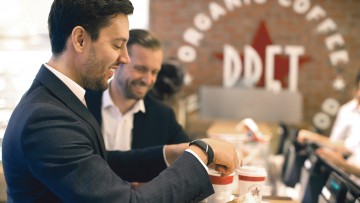 “People told us they’re looking for new ways to pay that offer greater flexibility and choice, and fit better with different lifestyles. So we built on the success of the early trials we held at music events, and expanded both the proposition and range of wearable products to give customers real choice and convenience over how they pay,” says Tami Hargreaves, Digital Consumer Payments at Barclaycard.

In a move that’s as much a part of the sharing, collaborative economy as it is about the security of traditional banking payments, bPay has effectively been designed with consumers’ input right from the start. And it’s not limited to Barclays and Barclaycard customers.

The results are impressive – more than £1 million has been spent using the devices in the six weeks since launch. 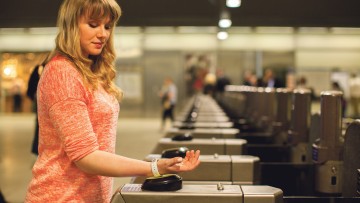 Of course, the expansion of bPay comes as all forms of contactless payments are increasingly accepted among the UK public. According to the UK Cards Association, contactless payments rose 331 per cent year on year in 2014 with the public making 319 million contactless transactions with a total value of £2.32 billion using the technology. On the other hand, bPay’s success is about more than market conditions.

Barclaycard has a history of kick-starting financial revolutions in conversation with its customers. Back in 1966, the company launched the first credit card in the UK, was the first to accept bill payments online in 1997 and rolled out the country’s first contactless card in 2007. Careful not to rest on any laurels, the company tested bPay with the kind of discipline and rigour you’d expect from a leading brand. Initially offering wearable payments trials at music festivals and events back in 2011, demand from users to be able to use their bands beyond the confines of specific events got the company thinking.

So in 2014, with the introduction of contactless payments on London’s transport system, a project in which they played a key role, bPay rolled out a trial programme of bands to 10,000 commuters. “Commuters loved the ease and speed of being able to board a bus or jump on the Tube with just a wave of their wrist. No more hunting around for their travel card or joining a long queue to top up,” adds Ms Hargreaves.

Barclaycard rapidly learnt that, while customers appreciated the speed of payment and the absence of so-called “card clash” – two cards in the same physical wallet both making payments for the same journey – there were ways bPay could serve them even better. 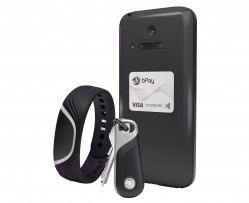 “Our first, most basic finding included the need to adjust the design and look and feel, and make the bands smaller. While the devices were ideal for commuters, if we wanted people to wear them throughout the day, we had to make them more discrete and offer different colours,” says Ms Hargreaves.

Feedback suggested chip tech limitations meant the band was too large and clunky. In the latest iteration the company has taken advantage of tech advances to make the current wristband slimmer, offer a wider range of colours, including grey and charcoal black, and give it a more premium feel. At the same time the brand is working with designers and big-name stores to incorporate the chip payment system into everyday items to make the job of paying as seamless as it can be.

If a user loses their device or has it stolen, they can remotely shut it down online or via the app, making it safer than carrying cash and just as secure as any credit or debit card

People started customising their own wearable options, slipping the chip out of the wristband and fixing it to watch straps, Loom bracelets, even magic wands. Many customers who stuck with the bands added colours and tweaked the design, and even offered Barclaycard mocked-up designs on how they’d like to personalise them still further.

As a result, the fashion industry is a new, key partner in designing future wearable technology, the company believes. “No one knows style and fit better than these guys,” Ms Hargreaves points out, “so they’re leading the innovation that will enable everyone to pay in a convenient, flexible and secure way.” 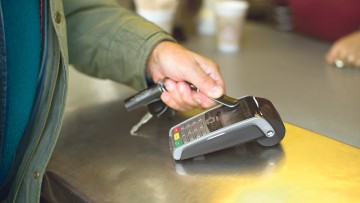 In terms of managing payments, the biggest demand was for an app that would allow users to monitor their spending and keep track of their balance. Barclaycard obliged. The new app allows customers to check their balance, view their transactions in real time and top up instantly – so quickly that, if they’re in a queue, they can add funds by the time they reach the checkout.

If a user loses their device or has it stolen, they can remotely shut it down online or via the app, making it safer than carrying cash and just as secure as any credit or debit card. All payments come with the same fraud protection that is applied to contactless cards.

When it came to building the app, extensive research and market knowledge of customers’ concerns identified that, as always when there’s money on the table, security was the number-one concern. That’s not just the security of payments – customers are increasingly worried about the amount of data they’re handing over.

As a result, Barclaycard has worked hard to combine the need for a secure, robust sign-up process, with the need to ask only for essential information, taking a disciplined stance on avoiding the plethora of “required information” that dominates so many registrations these days.

Up to ten different wallets, which can be individually named with customisable settings, can be managed in the app, allowing parents, for example, to give a device to the kids and put their pocket money on to it or use the auto top-up feature to ensure they always have £10, say, to get home.

By making the wristband and fob available in high street stores for the first time, we’re hoping to make bPay one of the most widely available and accessible wearable product ranges

Further insight came from a tie-up with Southampton Football Club which saw branded wristbands issued to some of their biggest fans and the club’s concessions all taking contactless for the duration of the trial.

A whole range of different spending patterns emerged. Contactless payments, explains Ms Hargreaves, typically take place on weekdays. The football band opened up the weekend and saw fans gearing up to spend in the ground. Financial services aren’t typically a sector that inspires passionate loyalty in its user-base. The branded band, however, allows partner brand loyalty. A similar tie-in with Pride in London last year proved consumers appreciated displaying their passions and loyalty.

Using all this input, the new bPay roll-out included not just the slimmer wristband but a bPay fob, which can be attached to your keys, and a discreet, secure bPay sticker that can turn almost anything into a contactless way to pay. 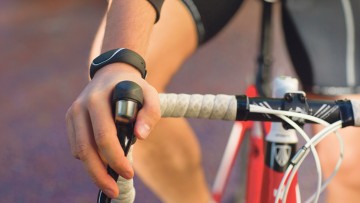 And for the first time in its history, Barclaycard is making the bPay range available to buy on the UK high street as it looks to make it quick, easy and convenient for people to get their hands on the latest wearable payments technology from bPay.

“Twelve months ago we wouldn’t have positioned retailers as being a distribution arm for us,” says Ms Hargreaves. “But by making the wristband and fob available in high street stores for the first time, we’re hoping to make bPay one of the most widely available and accessible wearable product ranges.”

And imaginations seem to have been captured. Even the revamped packaging has proved a hit – making bPay almost unique in being a financial services product that had photos of its packaging enthusiastically posted on Instagram and Twitter, and giving a satisfyingly old-school response to innovation. This, ultimately, is the lesson of bPay – tradition may be unusual in Silicon Valley, but it is Barclaycard’s experience and long-term consumer understanding that’s helping it shape the future of payments so successfully.