As their budgets continue to be squeezed, police, fire and ambulance services are combining to utilise sometimes futuristic technology and share data

When Steven Spielberg began work on Minority Report in 1999, he gathered a team of MIT experts and asked them to imagine how policing might look in 2054. They came up with facial scanning for identification, tiny robots to search for criminals and augmented-reality controlled computer systems.

Fast forward to 2015 and the only technology not currently in use or trialled by UK police forces is augmented reality.

There’s a tidal wave of tech about to flood the UK’s emergency services, and there are fears that already hard-pressed front-line staff may struggle to cope with adapting old systems and old ways to the new world. The vision, however, is clear and last summer, Rob Coleman, director of the Home Office’s Centre for Applied Science and Technology, revealed his wish list for the “digitally enabled officer of the future”.

At the Robocop end of the scale, he described adapting powered exoskeletons, such as the ReWalk system pioneered by Salford University to help paralysed Afghan veteran James Johnson walk again, to give bobbies an advantage when running after criminals, new light and strong body armour made from graphene, and wearable goggles similar to Google Glass equipped with face-recognition software.

More immediately, body cameras, beginning with a trial by the Metropolitan Police in 2014, electronic notebooks, and the use of drones in searches, traffic and crowd control are already part of cutting-edge UK law enforcement.

Even the data gathering at the stereotypical pub fight is changing rapidly, according to former chief constable Alex Marshall, now chief executive of the College of Policing. Back in the 1980s, evidence would have been limited to witness statements and medical information. Today, officers can add mobile phone footage uploaded to social media and video evidence from their body cameras.

It’s part of a drive to “turn crime scene data into real-time intelligence”, according to Nigel Rees, consultant on the Home Office’s restructuring of the Emergency Services Network.

“There may be some public resistance to the idea of drones with facial-recognition software scanning crowds for criminals or troublemakers,” warns James Murphy, head of the defence programme at techUK. “The more immediate problem is how any data gathered can be put to work. There are no national common standards, so the cutting-edge systems deployed by one force may struggle to talk to other systems. Using drones isn’t much help if the data a drone provides can’t be analysed properly.”

Mr Murphy hopes future Ministry of Justice crime prevention strategies include an interoperability charter that would link street policing through to the courts and Crown Prosecution Service, akin to the current NHS charter. Intriguingly, despite tentative trials of crime-predicting software by London’s anti-gang police at Scotland Yard, it’s the NHS which is truly pioneering predictive technology.

NHS Western Isles, which covers the remotest Scottish islands, is using adapted QlikView business intelligence dashboards to share information from GPs, hospitals, A&E departments and ambulances to ensure front-line staff are in the right place with the right information before they are needed, according to Martin Malcolm, NHS Western Isles’ head of health intelligence.

The trust relies on the Scottish Ambulance Service to provide essential air ambulances, including the new Airbus H145 helicopter, equipped with fast-streaming satellite communications so paramedics can talk directly with hospitals during flight. 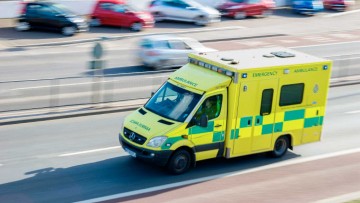 Legislation to merge the blue light services, initially bringing fire brigades under the control of police and crime commissioners, has begun its journey through parliament. The proposals include plans for police and fire officers to carry essential paramedic technology so they can act as first responders until paramedics or ambulance crews arrive, meaning a gradual merging of key functions of emergency services.

In Devon and Somerset, for instance, fire fighters have been trained by local ambulance crews to provide CPR or cardiopulmonary resuscitation and basic life support, as well as oxygen and automated defibrillators, since 1997. Devon and Somerset Fire and Rescue are currently piloting a combined small fire engine and ambulance, the Terberg emergency life-saving support tactical ancillary rescue multi-service vehicle or, more romantically, the Telstar. This allows patients to be treated or transferred by fire officers.

“While fires have reduced, the demand for ambulance services has increased,” explains Steve Burnell, group commander at Surrey Fire and Rescue Service. “Ideally, we’ll see greater collaboration between all blue light services, including at the tech level. Again data is going to be crucial – it’ll help fire officers to have access to NHS databases to understand which residents in a block of flats may be in the most danger from smoke inhalation due to underlying health issues, for instance.”

Mr Burnell’s team is working with public sector consultancy Optevia to adapt Microsoft CRM or customer relationship management software to help prevent future fires and inform and update fire crews on their way to emergencies. Previously, as Optevia’s managing director Tim Vernon explains, checking residential and commercial premises for fire risk was managed by separate teams and tended to be paper based. With cost-cutting needed, merging the teams and providing them with protected iPads means digitally updated reports on the risk of fire, as well as possible danger spots, are available centrally on the same day.

“The system updates terminals in fire engines on what they can expect, including, for instance, dangerous staircases, while they’re on the way to an incident, meaning they have the right equipment and fewer nasty surprises,” says Mr Vernon.

Ultimately, most of the changes facing the emergency services are similar in scope and data driven. Googling “real-life Robocop” doesn’t give images of clanking machinery croaking “you have 30 seconds to comply” at terrified perpetrators. There are drones, new vehicles, even exoskeletons.

Mostly, however, its surveillance and information that’s changing the blue light services. It’s less Robocop and more Robosnoop, which makes any future Terminator more likely to be a nosey parker than an unstoppable assassin.