Distributed ledger technology, known as blockchain, could have the greatest impact in the insurance sector once it is embraced by the major players 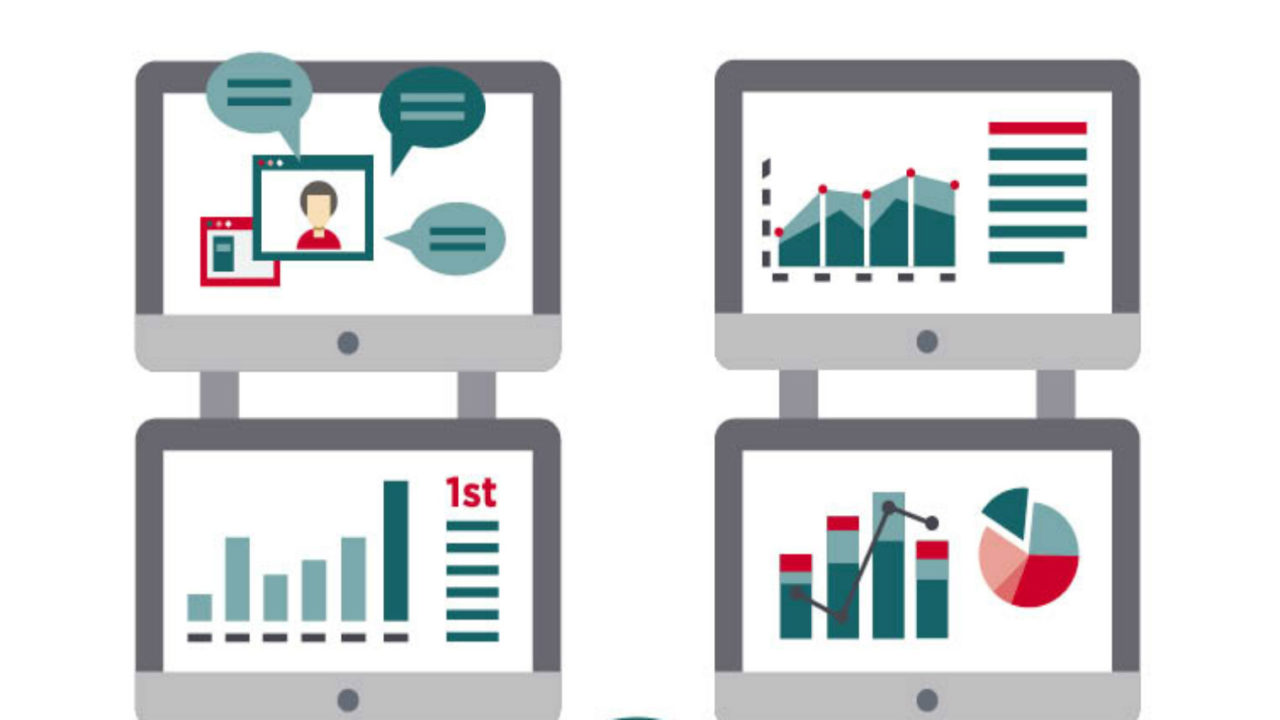 Historically slow to embrace change, insurance is rapidly emerging as the sector in which blockchain technology could have the most profound, transformational and disruptive effect.

The revolutionary concept blockchain offers is at heart a simple method of recording and sharing data. The distributed ledger technology is a basic database updated and approved by consensus of a public network. For insurance companies this is a time-stamped and tamper-proof historical record.

A report in August by London think-tank Z/Yen and accounting giant PwC put cost-savings for reinsurers who embrace blockchain at $5-10 billion. The “simple” solution suddenly has a huge prize dangling before anyone who cracks it.

“The insurance industry cannot afford to lose out on an unprecedented opportunity,” says Peter Hacker, chief innovation officer at London wholesale reinsurance broker Ed. “Both in respect of the potential process optimisation and the structuring of new solutions, this will lead to material savings for the whole industry.”

Mr Hacker says the big question being asked in boardrooms is whether a company can afford not to invest and in his view there is only one answer. “The industry is built around more centralised databases, big and fat databases, and blockchain is going to the heart of this very inefficient, costly approach and promising enormous change,” he says.

For consumers, it could merely be a time-saving exercise of not having to repeatedly enter details with a variety of insurers. For actuaries, it offers an indelible record of anything they provide cover for; all traces of the history of anything from land to rare works of art to music.

The proof of concept behind blockchain gives an industry built on trust evidence of data so accurate it threatens to turn the sector on its head. And yet with all this hype, perhaps so typical of insurance, there is scepticism.

“It’s a very exciting technology that has this tantalising promise of being able to do something dramatic; it has so much promise, but I haven’t seen anyone come along and show us the Holy Grail yet,” says Ashley Hirst chief operating officer and chief underwriting officer at AIG in London.

AIG’s European arm set up a science team, guided by Mr Hirst, to study how new technologies such as blockchain could improve the quality of data-driven decision-making.

Since 2014 AXA, Generali, Allianz, Lloyds of London, Mutual Insurance and MetLife have also poured millions into blockchain research, determined to strengthen ties with consumers, regulators and each other as they seek to stamp out errors and improve efficiency.

PwC gives the example of claims recorded on a blockchain validated by the network, with only the valid being paid out. A blockchain would refuse multiple claims for the same incident, knowing what had already been activated, and the smart contract would pay out only on specific conditions being met. An insurance contract written on a blockchain would therefore provide faster, more efficient, and more accurate placements and claims settlement, cutting expenses by 15 to 20 per cent, they say.

“Because the record is fundamentally public, it eliminates huge opportunities for corrupt or criminal behaviour,” says Mr Hirst. “It’s not like someone in a closed room can change a record; the record is public and that is potentially transformative.” 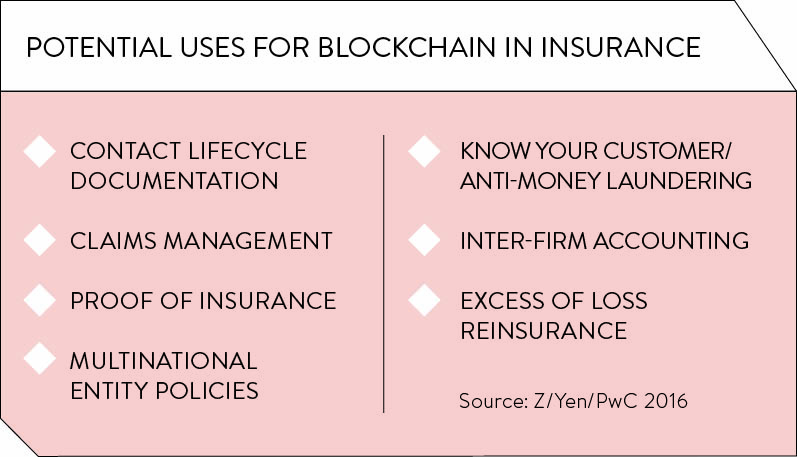 An estimated 5 to 10 per cent of all claims are fraudulent and, according to the Federal Bureau of Investigations, this costs US non-health insurers alone more than $40 billion a year.

Savings of expensive compliance and sanctions checks can also be factored in due to having streamlined and readily available records of any individual logged. Such efficiencies can wipe billions off overheads, consultants at KPMG calculate.

Despite his caution, Mr Hirst believes big changes will come in waves, starting with greater levels of shared, private information between reinsurers to help consumers save time.

“A consumer wants to file private information, but not have to do so 15 times with 15 different companies,” he says. “They want to authenticate themselves and log data on their car driving, but not have to retype it, so it’s about doing the work once, sharing many times.”

He believes the tipping point for this use-case is near. “If one party creates the environment for that to happen, if two or three insurers will buy in and adopt that format to make their customers lives easier, it could take off quite quickly,” he says.

Blockchain collaborations are becoming commonplace. The finance sector, driven by Wall Street, knows this and for the last 18 months blockchain has been the hottest ticket in finance. There is hardly a major bank not part of a consortium or announcing partnerships and testing with other institutions.

Savings in the billions in back-end, know your customer, compliance and efficiency costs have been predicted by researchers from Goldman Sachs, Banco Santander and Barclays. The PwC-Z/Yen report echoes findings by both KPMG and auditors Deloitte that collaboration, trial and experimentation is vital for today’s wholesale insurers. Firms working together to implement blockchain technology will reap the benefits, they say, as their interactions become more efficient.

Despite the hype, it took more than 12 months from the first names in banking to announce partnerships for a similar move by insurance players. Formerly at McKinsey before joining AIG, Mr Hirst’s enthusiasm is tempered by his experience and he believes it could be at least a decade or more before so many fragmented interests are brought together.

The second wave, the next great promise of the immutable distributed ledger, lies in recording an unbroken chain of events, he says. This could be establishing the ownership of land or precious stones, for example. Mr Hirst believes this is a long-term ideal for the insurance sector, but one that could resonate much further than the industry itself.

“If I have a chain-of-land sale and the first time someone says they aren’t recording on blockchain, my history is no longer 100 per cent liable,” he says. “But there are countries in the world still building land registry systems today and if they decide from day one to have a mandate on how it will work, built on a blockchain, that could be phenomenal.”

This data accuracy ensures blockchain can be used to deliver smart contracts, programs which self-execute when predefined conditions are met, according to Guy Halford-Thompson, chief executive of programmers Blockchain Tech Ltd.

“Automation and smart contracts is certainly one area I think we’ll see blockchain have a big impact,” he says. “I think it may take time to get there, but insurance is one of those industries that will see the most progress, the most change, when it does adopt.”

He sees a naturally hesitant industry rapidly heating up, but believes the most radical change will initially come in smaller value areas which then increase over time.

“Smart contracts on blockchain technology could work specifically around smaller value contracts; let’s say you want to insure your phone for a day or you don’t drive your car very often so every time once a week you use it you just insure your car for that one trip,” he says.

It is from this smaller starting point that the more complex uses-cases will appear, Mr Halford-Thompson believes.

“In the asset trading side in insurance, we are seeing activity, in buying and selling insurance contracts, liabilities and so on,” he adds. “You can have smaller insurance contracts managed by smart contracts and then the ability to actually transfer ownership of those contracts, and so you start to imagine a powerful pattern emerging there over time.”

In September, one of Japan’s largest property insurers Sompo Japan Nipponkoa Holdings announced development of a blockchain platform for derivatives. It is working on a system for buying and selling insurance policies related to natural disasters.

Last year, French insurance giant Allianz unveiled a prototype platform for the exchange of catastrophe bonds. At the time, Allianz said it was studying the potential to increase the “reliability, controllability and speed” of such trades using a blockchain-based system.

Professor Michael Mainelli, chairman and co-founder of Z/Yen, has spent 20 years building hundreds of bespoke distributed ledgers for the public and private sectors. Having worked for two decades on what is suddenly a zeitgeist, Professor Mainelli offers a vision quite unlike any other, something he saw coming back in 1995 when the first blockchain rolled off the Z/Yen production line.

“It’s exciting, but not in the areas many people think,” he says. “For me wholesale insurance is something that could be profoundly changed, along with the insurance of contract law. It’s data that should be in the public domain. You could almost see a situation in future where if you don’t put your records on a blockchain, they’re inadmissible in a court of law.”