You forego the holiday in the Maldives. The £2,000 Miu Miu dress stays in the shop but, according to Leonard Lauder, you’ll still buy the £20 lipstick. And history has a funny way of proving him right.

Not only were some of the world’s biggest brands founded during periods of austerity – Revlon in 1932 and Estée Lauder in 1946 – but during the Great Depression of the 1930s, cosmetic sales also increased by 25 per cent.

Yet, while in the past it was lipsticks that dominated, the current economic crisis has seen two other product categories vie for the top spot in terms of sales. Welcome to the era of the “Foundation Factor” and blemish balm “BB Boom”. So what is it about a recession that makes women reach for the slick of a lipstick or the squirt of a skin-brightening face product?

Rewind to the Second World War and the scarcity of cosmetic ingredients, such as oils, chemicals, stabilisers and glycerine, which had been commandeered for the war effort, upped their cache, making them ever more desirable. A glamorous red lipstick was not only a way for women to lift their own spirits, but also pepped up the soldiers when they returned home on leave.

When the economy dipped in the 90s, make-up once again adopted the role of morale booster as women used colour cosmetics to express their individuality.  “During the pre-Millennial decade, make-up sales were strong as consumers started to view it as a fashion accessory,” says Nicky Kinnaird, who founded Space NK in 1993.  “MAC arrived from the US and new lines, such as Stila, Laura Mercier, Bobbi Brown and Nars, also piqued customer’s interest with a much wider colour palette to choose from.”

During the Great Depression of the 1930s, cosmetic sales increased by 25 per cent

Today, the instantly gratifying “treat factor” of a shiny new lipstick or smoky eye shadow palette is borne out by consistently strong sales. While Mintel forecasts that the colour cosmetics category will grow by 31 per cent between 2010 and 2016, NPD forecasts that the value of sales will hit £1,420 million this year.

According to Sara Stern, beauty director at Debenhams, it’s the comparatively low price point of cosmetics, (in relation to skin care and fragrance), immediate feel-good factor and technological innovation that go a long way to explaining the statistics.

As the entry point into make-up for teenagers and life-long glamour item for women of all ages, lipstick is still very much the power player. But, if lipstick offers instant transformation, what is it about those innocent jars of seemingly humdrum make-up base that have the words “foundation factor” tripping off economists’ tongues?

Certainly, the fact that formulations and textures are more advanced than ever, in some way accounts for the 80 per cent growth in foundation sales reported by NPD. Not only are they lighter and more comfortable, but they also contain skin-boosting technology and ingredients. And with recent launches, including Estée Lauder’s Invisible Fluid Make Up, Lancôme’s Teint Idole 24HR, Givenchy’s Matissime and Chanel’s Aqualumière Compact, as well as foam formulations from Maybelline and Revlon, there’s something to suit all complexions and ages.

A changing beauty ideal is also in part responsible for foundation’s new-found success. “Not only is foundation the key staple item that every woman should have in her make-up bag, but flawless skin has recently become the must-have look,” says Annalise Quest, general merchandise manager for beauty and fine jewellery at Harrods.

Which also explains why BB cream, a multi-tasking skin product originally from South Asia that marries healing, hydrating and anti-aging properties with sheer coverage, is booming. Since Garnier launched their version last year, a raft of brands, including Dior, Clinique, Smashbox and Giorgio Armani, have cashed in on its allure.

“Beauty trends often reflect what is going on in society as a whole,” says Jaana Jatyri of Trendstop.com. “In these straightened times, BB creams promise time-saving, multi-benefit and cost-effective skin care in one package.” She anticipates that multi-tasking make-up may even become a category in its own right, as more and more brands produce high-performance products that offer multiple functions.

What’s certain is that whether your poison of choice be one of Tom Ford’s deliciously luxe lipsticks or Yves Saint Laurent’s new Le Teint Foundation, with enticements such as CK One’s new cosmetics offering, Estee Lauder’s Aerin, plus forthcoming cosmetic collections from Christian Louboutin and Marc Jacobs, it seems that make-up bags will continue to overflow well into the future.

According to Mintel, nail polish sales have increased from £68 million in 2005 to £152 million in 2012 and currently constitute 14 per cent of all colour cosmetic sales.

And, as with so many things, it’s Chanel we have to thank. What they started in the 90s with Rouge Noir, they continued in 2009 with the limited edition Le Vernis in Jade. The acidic green shade sold out in Selfridges within 40 minutes and this August’s light beige Frenzy is very much expected to live up to its name.

Given that nail lacquer sales also rose by 37 per cent in Superdrug last year, it’s clear that whether it be premium polishes or masstige brands, nail varnishes are now how we get our recessionary kicks.

Nail bars have accounted for 16.5 per cent of all new UK businesses in the last three years. We’ve also seen the rise of super-manicurists, Marian Newman, David Barton, Sharmadean Reid (of WAH) and Sophy Robson, all of whom are setting the pace with cutting-edge catwalk looks that include everything from nail jewellery to velvet flock-like and suede textures, plus holographic finishes.

So watch out lipstick – when it comes to sales, nail varnishes are following closely behind in your glossy red wake.

How cosmetics made history 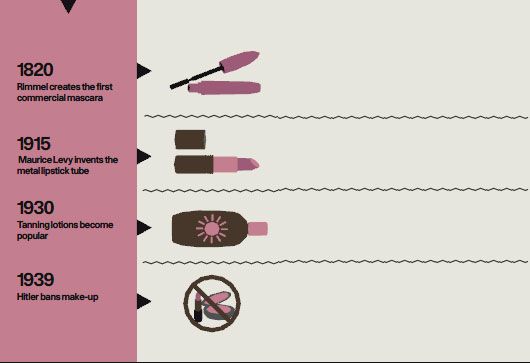 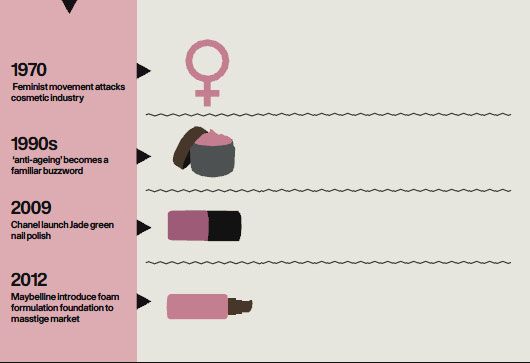