Changes to pensions may have given consumers greater choice and freedom, but they have also increased the risk of fraud and loss, particularly when withdrawing funds early.

A survey by internet safety initiative Get Safe Online revealed that just 38 per cent of those over the age of 55 know how to identify a pension scam, while 78 per cent aren’t worried about falling victim to a pension fraud and 10 per cent in the 55-plus bracket have already been targeted.

According to Parminder Dhothar, intelligence and investigations manager at insurance services provider Phoenix Group, it is difficult to overestimate the danger of pension fraud.

“Industry estimates have reported that between £500 million and £1 billion has been lost,” he says. “However, due to the hidden nature of these scams, it’s difficult to calculate the exact figures and they may well be significantly higher. In total, Phoenix has prevented over £26 million being paid out to suspicious pension schemes since mid-2013.”

Tactics used by fraudsters tend to evolve as new barriers and controls are introduced or as new opportunities arise, according to Mr Dhothar. “When pension scam cases first came into the public domain, the general approach was to offer early access to funds or ‘pension loans’, but as new procedures were put in place by the industry, regulators and government, fraudsters changed tack,” he says. 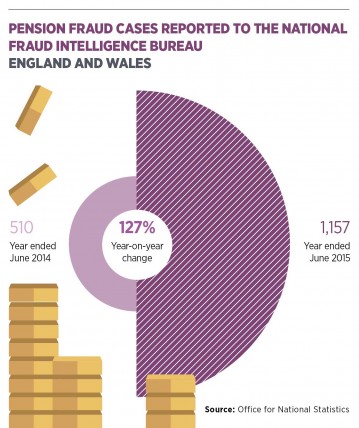 Pension fraud is on the government’s radar and ministers say action is being taken to combat it. The multi-agency Project Bloom was set up in 2012 to tackle scammers. Its members include representatives from the Department for Work and Pensions, the Pensions Regulator, the Pensions Advisory Service, Serious Fraud Office and HM Revenue & Customs. As a result there has been a tightening of HMRC’s pension scheme registration, including the introduction of a “fit and proper person” test for those setting up pension schemes, and police have raided the premises used by fraudsters.

The government points to public information initiatives, such as the Pension Regulator’s Scorpion Campaign and the wider ScamSmart campaign from the Financial Conduct Authority (FCA). The National Crime Agency has bought 70 domain names to prevent them from being used by fraudsters and it is now a criminal offence for scammers to pass themselves off as the official government Pension Wise service.

“Scammers wreck lives and we’re working tirelessly to shut down illegal schemes and bring these criminals to justice,” says pensions minister Baroness Altmann. “Reputable financial organisations will not call you out of the blue, so if someone you don’t know contacts you to discuss your pension, my advice to you is just hang up the phone or delete the message.” She also recommends Pension Wise for help.

Not everyone believes the government is doing enough and some argue that pensions freedom has only increased the threat from fraudsters. “Even before the law changes, there had been significant growth in recent years of boiler-room scams involving fraudsters holding themselves out as investment managers targeting pension scheme members,” says David de Ferrars, co-head of the corporate crime and fraud unit at law firm Taylor Wessing.

Investors have been encouraged to transfer their pension savings into Street of Dreams, a musical based on the TV soap opera Coronation Street, which closed in 2012 after just two performances

“The fraudsters would encourage them to withdraw pension lump sums early, typically without regard to the tax consequences, take part as a cash lump sum and to invest the balance in alleged high-return investment schemes, run by them, that turn out to be shams.

“While trustees and professionals in the pensions arena will seek to educate the market, in terms of responsibility I would say that the government and law enforcement agencies should seek to raise public awareness about the risks and how to address them. Employers with occupational schemes could also be encouraged to do so.”

Although not illegal, pension liberation, a product that offers savers access to their pension before they hit 55, can often result in loss and disappointment. It’s something that is frowned upon by the FCA because of the high costs and tax liability incurred.

Investors have often been encouraged to transfer their pension savings into high-risk ventures, in one case putting money into Street of Dreams, a musical based on the TV soap opera Coronation Street, which closed in 2012 after just two performances. This summer the High Court put into provisional liquidation two pension administration firms, which acted as trustee for schemes that received around £19 million in transfers from retirement savers.

John Fox, director of pension company Liberty SIPP, is so concerned about people being encouraged to invest their pension pots in unsafe schemes that he will actually refuse a transfer, a move he accepts is controversial.

“Anyone younger than 55 shouldn’t be fooled into trying to release their pension savings,” says Mr Fox. “This is pension liberation, rather than freedom. It’s not illegal, but it comes at a painfully high price – the taxman will fine you up to 55 per cent of any money you take out of your pension this way. Of course, the pension liberation cowboys won’t mention this.”

So do regulations need to be tightened? “It’s too soon to say, as we’re still in the very early stages of the reforms taking effect,” says Nicola Hartley, an independent financial adviser for Simpson Millar. “The industry hasn’t had a huge amount of time since the reforms were first being talked about and proposed, to adjust to them yet, and we still need the current regulations to bed in before we can take a view on this.”

To report a scam, call the police Action Fraud line on 0300 123 2040 or go online at www.actionfraud.police.uk