Before the advent of social media, trading could be a lonely business. But now, thanks to the rise of social media platforms such as Twitter and the advent of the smartphone, individuals can easily connect with fellow traders around the globe. Welcome to the world of social investment networks.

CMC Markets is one example. It has been involved in the spread-betting industry for more than 22 years and recently launched an aggregated Twitter feed, which combines the feeds of dozens financial commentators. The firm claims this means that its clients can experience a flow of information akin to sitting on a trading floor in the City. 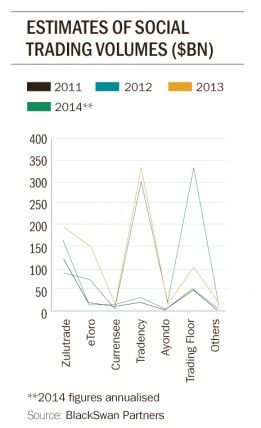 “Some traders pick this feed over the more traditional news networks to gauge sentiment before items get picked up on more official channels,” says CMC’s Craig Inglis.

Other firms take a different approach. eToro, which in 2007 was the first firm to combine a social network with a proprietary trading platform, allows users to copy each other’s trades with ease.

Every person who opens an investment publishes that investment on its network in real time. Every trade and investment is automatically published on the trader’s “wall” so all eToro’s users can view each other’s activity at the click of a button.

“Traders can search for and follow other traders whose strategies and track records they like – a successful tech investor in Hamburg or a currency investor in Madrid,” says Nadav Avidan of eToro.

Copy trading has proved to be extremely popular, both as a way of profiting from others’ expertise and as a way of learning from them

“They can be updated whenever these traders invest or close a position and can automatically copy their trades, investing automatically in their strategies.”

Mr Avidan explains that most eToro traders copy multiple traders, invest a few hundred dollars in each, and copy their trades in to their accounts. If a copied trader makes 20 per cent, so does the trader copying him or her.

The firm says its copy trading feature has proved to be extremely popular, both as a way of profiting from others’ expertise and as a way of learning from them.

eToro is also one of a number of platforms that now allow social trading in “crypto currency” Bitcoin, which itself was born of the “social revolution”.

Social trading tools lower non-financial barriers to entry in foreign exchange trading. Mr Inglis says the amount of precursor training has certainly been reduced, and news and analysis is now more focused, as well as accessible, than ever before. 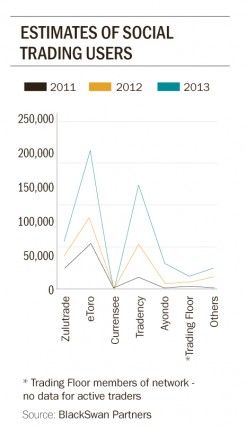 “Traders are being presented with additional potential set-ups, with greater amounts of effective supporting data, to help them when making decisions,” he says. “When I first started in the City, almost ten years ago, technical analysis and charting was a skill that took years to master, now relatively new traders can understand the core signals without needing to know the in-depth calculations or how to apply them.”

However, as with all trading, it is vital to be aware of the risks. Just as any trade should have correct risk management at its heart, so social trading should be done with an awareness of the fundamental pitfalls.

“Other traders may have different time-frames or risk tolerances and blindly following them is as dangerous as undertaking a trade without proper research,” warns Chris Beauchamp of IG. “Also, be aware of looking just at performance records. Many of these tend to just take closed trades into account, ignoring any open trades that could be running losses. Check out the open positions and include them in performance as well as the successful closed trades.”

While Mr Beauchamp concedes there is the risk that traders could lose some of their analytical ability in simply aping existing systems, he believes the independent streak many possess means successful traders will see social trading as another weapon in their armoury and not as a wholesale replacement for their research. “The adage ‘do you own research’ still applies,” he notes.