While it is true to say that economists don’t spend much time, if any at all, discussing Charlotte Tilbury’s new make-up range, the difference between BB, CC and EE creams or what shade of Too 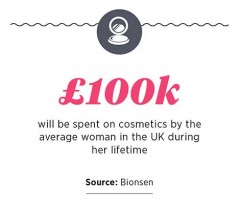 Faced bronzer would suit their skin type, there is one item that has successfully made it into economic theory – lipstick.

The lipstick effect, the idea that people buy themselves cheap treats when times are tight, has been in play since the depths of the downturn in 2009 and, while consumer spending is yet to recover to the levels that the government would like to see, shoppers have definitely been splashing their cash on beauty and skincare products.

According to Mintel, the market research company, the UK’s beauty and personal care market was worth a pretty impressive £16.6 billion in 2014, up from £13.8 billion in 2009. Within that, cosmetics sales reached £1.34 billion last year, while sales of women’s facial skincare hit £1.06 billion.

However, with inflation hovering close to record lows combined with tentative signs of a long-awaited pick-up in wage growth, the lipstick effect may soon be replaced with Brits feeling better off, which will no doubt translate into further spending on these items.

As a result, spending on beauty and skincare in the UK is expected to reach new highs in 2015, with Mintel forecasting that consumers will spend an average of £342.90 this year.

While higher wages are expected to translate into higher spending, the global financial crisis and following years have meant consumers have become adept at seeking out a bargain.

For that reason, the latest Premium Market Report found there has been a large number of new budget beauty brand launches, such as Kiko and Poundland, “which have struck a chord with value-seeking consumers who mix and match cheap and expensive brands”. 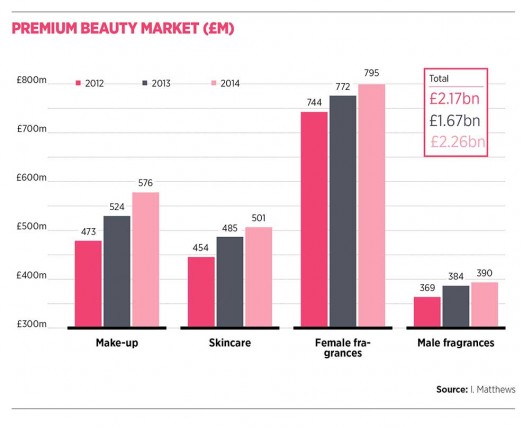 In particular, Poundland’s Make Up Gallery range recently won first prize in The Grocer Gold Awards for the best own-label launch of the year in 2015 and received a rave review from Vogue.

Nevertheless, it was another stellar year for premium make-up. UK sales of premium beauty products have been robust over the past three years, growing on average between 5 and 6 per cent per annum.

Successful new launches include Charlotte Tilbury, make-up artist to the stars, unveiling her eponymous range at the end of 2013, which will no doubt help these figures grow further as she adds new products to her offering, such as the magic foundation.

At the same time, across the beauty and skincare sector, four interesting trends have continued to emerge over the past year. The first being men’s skincare rising in popularity, with UK sales of men’s facial skincare coming in at £96 million.

Two British companies that have been making inroads in this sector are Scaramouche & Fandango,  a men’s grooming and skincare company that launched in 2013, and  Bulldog, which started life ten years ago when Simon Duffy, its founder, noticed there were no straightforward skincare options for men who wanted products packed with natural ingredients.

The latter, which started to export in 2010, is now the UK’s third-largest national skincare brand for men and is available in a further 13 countries, including the United States, Germany, Australia, Sweden, Norway, Austria, South Korea, Thailand, Ireland and Spain.

Mr Duffy says: “When we were first developing Bulldog, we realised the mainstream products in the regular male skincare market were incredibly underwhelming and were not actually focused on men. Everything was a ‘for men’ version of famous female skincare brands, such as Nivea or L’Oréal. We decided to do things differently and set out to create skincare products that are purpose-built for men, using natural ingredients that really work.”
Secondly, organic skincare has also surged in popularity, with the likes of successful food blogger Deliciously Ella telling her readers that she tries to use only natural beauty and skincare products.

One company that has been capitalising from this is Balance Me. Rebecca Hopkins, co-founder and director of the company, says as a brand it “identified a gap in the market for high-tech, premium natural British skincare at affordable prices, and has challenged what natural beauty stands for in this country by pushing the boundaries with innovative and cutting-edge formulations across skin, bath, body and haircare ranges”.

Next are beauty and skincare products for older women, with the number of women over 50 at its highest level ever. According to the Premium Market Report, with more spending power than women half their age, they are a prime target for beauty brands looking for new growth opportunities.

As a result, more brands are using older models in their advertising, such as Charlotte Rampling for NARS and Helen Mirren for L’Oréal Paris.

Finally, the last year has also seen major brands become much more aware of the power of beauty bloggers, including Fleur De Force, Zoella, A Model Recommends and ViviannaDoesMakeup.

This is demonstrated by how some are using these women as the face of their brands instead of traditional celebrities, such as actresses and singers, as well as sponsoring some of their content. For example, Eyelure, the false eyelash brand, recently unveiled a collaboration with Fleur De Force, whose YouTube channel has three to five million viewers a month.

However, despite the beauty industry being a huge business, it has always been treated as the ugly sister compared with the fashion industry, which is lavished with attention from government ministers.

This may be starting to change though as it looks like that the government, especially George Osborne, is finally starting to pay some attention to the sector.

“The Chancellor’s relationship with CEW [Cosmetic Executive Women] and the beauty industry has been very positive. He certainly had some encouraging things to say about us at the reception he held for us last October. I also know that he has been very helpful to brands that have approached his office for advice and direction,” says Caroline Neville, president of the Cosmetic Executive Women.

“Now CEW have connected with the Chancellor and presented our talented industry to him, I think we can look forward to receiving the recognition our British beauty brands deserve, in the same way that the British fashion industry has been so successfully supported.”