At the forefront of reshaping an industy

It started out as rapid prototyping – a fast way of creating industrial prototypes to guide product and tooling design. Now, 40 years on, industrial 3D printing, or additive manufacturing as it is also known, has evolved to become one of the boom sectors of the past decade.

3D printing is the process of building successive layers of, typically, metal or plastics to create three-dimensional objects. But while it is the idea of printing objects at home – jewellery, toys, even chocolate – that has caught the public imagination, it is industrial 3D printing that is driving growth and innovation in the global marketplace.

EOS GmbH Electro Optical Systems, a privately owned German company founded by Dr Hans J. Langer in 1989, is at the forefront of a transformative industry that is revolutionising traditional product manufacture and design.

Currently the leading direct metal laser sintering (DMLS) company in the sector, selling five times more industrial 3D printers than its competitors, and one of the leading players in the plastics sector, EOS’s growth since 2002 has been impressive. Gross sales have risen to €177 million in 2013-14, while staff numbers increased from 162 in 2002 to 541 in 2014. Ninety new employees joined this year, with the recruitment of approximately 100 more planned for 2015. It now has 11 offices across the world, and recently opened a new technology and customer centre in Krailling. 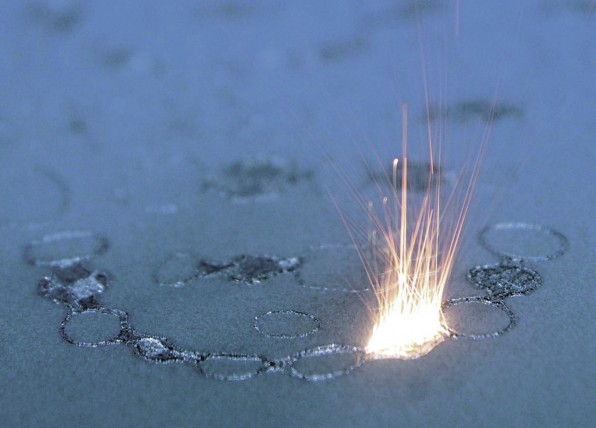 So how has it managed such sustained and vigorous growth? Technical expertise, a commitment to constantly improving its products and services, and its focus on a specific market segment, says Stuart Jackson, regional manager at EOS. “We are an engineering-based company with engineers and scientists at its core, plus we invest heavily in research and development – our standard annual reinvestment rate is 15 per cent,” he says. “And we offer industrial 3D printing/additive manufacturing exclusively to high-end, blue-chip customers.”

One such customer is Munich-based MTU Aero Engines, Germany’s leading engine manufacturer. In May, MTU became one of the first companies in the world to create components for production engines using additive manufacturing techniques. The company, employing EOS hardware, manufactures “bosses” as part of turbine casings to allow the easy inspection of blades for wear and damage with a borescope when required.

MTU used to make these parts by casting or milling them from solid metal. Now it uses lasers to melt and fuse metal powder into 20 to 40 micrometre-thick layers, which are built on top of one another until the entire component is completed. This technique allows MTU to manufacture complex components that would be very difficult, if not impossible, to make using conventional methods, and uses fewer raw materials and tools.

The company only produces small numbers of borescope bosses at the moment, but once production of the PW1100G-JM engine, used to power the A320neo aircraft, ramps up from 2015 onwards, its output will increase substantially.

Other clients include Siemens Industrial Turbomachinery, for which EOS adapted one of its in-house machines for metal printing so the Swedish-based company could more easily and efficiently repair and improve components in its gas turbines. Conventional repairs required prefabrication of big sections of the turbines’ burner tips, which need replacing over time. Additive manufacturing meant Siemens could remove and mend the damaged material instead of replacing the whole unit. At the same time, the technology allowed engineers to rebuild damaged burners according to the latest design, thereby repairing and improving them.

Bego USA operates in an entirely different field, but also uses EOS technology. It makes dentistry products – everything from simple fillings to crowns, bridgework and implants. Due to a number of factors, including the price of gold and competitive overseas labour costs, the company wanted to move away from traditional manufacturing methods and approached EOS to help it do so. Bego now makes its dental restoration products using industrial 3D printing – EOS’s first application of the technique in the dentistry sector.

EOS’s additive manufacturing technology is changing the way companies manufacture and replace products and components. Not only does industrial 3D printing reduce customers’ design and tooling costs, its capacity to create products with complex geometries results in lighter goods that use fewer resources. In industries such as aerospace where weight saving is critical, this can mean substantial energy and therefore operational cost-savings over product lifetimes.

In a world of increasing resource scarcity, there are sustainability benefits to additive manufacturing, too. Relative to conventional processes, it is an extremely efficient use of resources and, because it is powder-based, has a high reusability percentage. “The world has to become more efficient in what it uses or reuses. That’s a big boost for industrial 3D printing because that’s one of its core advantages over conventional manufacturing,” says Mr Jackson.

Although it is a relatively young market, EOS already has a wealth of experience and knowledge, both of which it intends to build upon to maintain its position as the sector’s market leader. “Our focus is and will continue to be on the aerospace, medical and engineering sectors – that is where we see the growth happening, and where we are concentrating all our resources, and research and development activity,” says Mr Jackson.

“Industrial 3D printing will not completely replace traditional manufacturing; it will complement it and lead to numerous business opportunities. EOS is proud to be at the forefront of this new era.”