All eyes on the road for the vision van

When the Vision Express Vision Van rolls into town, it’s difficult to miss. Which is rather the point. Because the van – a giant mobile eye-testing unit – is the centerpiece of Vision Express’s commitment to raising awareness of eye health across the UK.

Launched just two years ago, the Vision Van has already travelled the length and breadth of the country offering free on-the-spot eye tests to support the company’s belief that the nation should be taking vision seriously.

From Brighton to Birmingham, Norwich to Hull, the van has been reminding communities across the UK of the importance of regular eye checks, not just for the sake of their long or short vision, but also their overall health. Eye tests can identify serious conditions such as glaucoma and macular degeneration early enough to allow potential sight-saving interventions to take place.

Moreover, close examinations of the back of the eye and the blood supply, which supports the area, are important for picking up widespread health conditions such as type 2 diabetes and heart disease.

We can take eye tests to people, particularly in areas where poor eye health is prevalent

So visitors to the van are invited to have a comprehensive 30-minute eye examination to best-practice guidelines of the College of Optometrists. Each examination includes an eye health screening and uses optical coherence tomography, carried out by an expert optometrist from Vision Express.

The van is also tangible and visible evidence of Vision Express’s commitment to making eye testing available to those who are worried about cost; research shows that 37 per cent of Britons avoid booking an appointment due to fears over finance.

Jonathan Lawson, Vision Express chief executive, explains: “Our core message has always been a simple call to action: book an eye exam and start looking after your eye health. We knew that really resonated with customers and so establishing the Vision Van was a logical next step. This way we can take eye tests to people, particularly in areas where poor eye health is prevalent.”

What has become clear quickly is that the van is an attractive approachable alternative for those people who never have eye tests, even if they suspect there is a problem.

“We want to break down the invisible barriers which prevent people caring for their vision,” says Mr Lawson. “We know that sight loss is one of the most feared health conditions as we get older. Yet one in six people have never had an eye test. You can lose up to 40 per cent of vision before you realise you have a problem.

“And we know that even with deteriorating sight, people procrastinate about seeking help. So the van is also a really useful way of jogging people’s minds.” Online eye test bookings at Vision Express rise by about 50 per cent when the van is on tour.

When customers do approach the van, staff report first curiosity and then interest. “They tell us that the public are generally surprised and then delighted,” says Mr Lawson. “They ask, ‘Can I really have my eyes tested in here? Now?’ We think for some it is a lot less intimidating than walking through a shopfront and displays of glasses.

“We have not had one piece of negative feedback from customers and crucially the staff really enjoy working on the Vision Van too. One trainee optician joined the van in Gloucester for a day and begged to stay all week. He told us he was blown away by the experience and the chance to help customers in such an immediate way.”

Mr Lawson says the results of the Vision Van are also impressive. “Eighty five per cent of those we see via the Vision Van need a new prescription. One in ten are referred to a GP when one of the optometrists has spotted something potentially more serious.”

This enables Vision Express to support its charity partners too, both the International Glaucoma Association and the Macular Society.

More than two million people living in the UK have preventable sight loss due to these and other conditions. Age-related macular disease is the most common cause of sight loss in the developed world, affecting around 600,000 people in the UK. Nearly 200 new cases are detected every day, with the number of people affected forecast to increase due to more eye disease in an ageing population which requires long-term care.

Glaucoma, meanwhile, is the name given to a group of eye conditions in which the main nerve to the eye – the optic nerve – is damaged where it leaves the eye and affects another estimated 600,000, although half of that number are undiagnosed.

The Vision Van’s schedule is timed to coincide with eye health awareness weeks, which this year have included World Glaucoma Week in March, which saw the van in Nottingham, Bristol, Truro, Reading and Birmingham, and Macular Awareness Week in June, when the van was in action in Wimbledon, Brighton, Gloucester, Sheffield and Liverpool.

It will be on the road for National Eye Health Week from tomorrow at locations throughout the country.

Most importantly, the drivers of the Vision Van have benefited from the mobile testing experience. Alan Larcombe from Gloucester says: “I’ve been a professional driver since 2007 and been lucky enough to travel all over the world with promotional exhibition units. Being able to see well when I’m driving is really important, but it’s something I take for granted. I have a sight test as part of my job, but I’ve not had a full eye test for a long time.”

After trying out the Vision Van’s service, Alan learnt his normal sight was fine, but he was advised to get reading glasses for close work. The optometrist also noticed a potential problem with cholesterol and recommended a trip to the GP. Alan was impressed with the results, as indeed all the public seem to be.

And the Vision Express team couldn’t be more pleased. Mr Lawson concludes: “Our biggest priority is the public’s eye health – we are happy to stand by that.” And the Vision Van looks set to stay on the move. 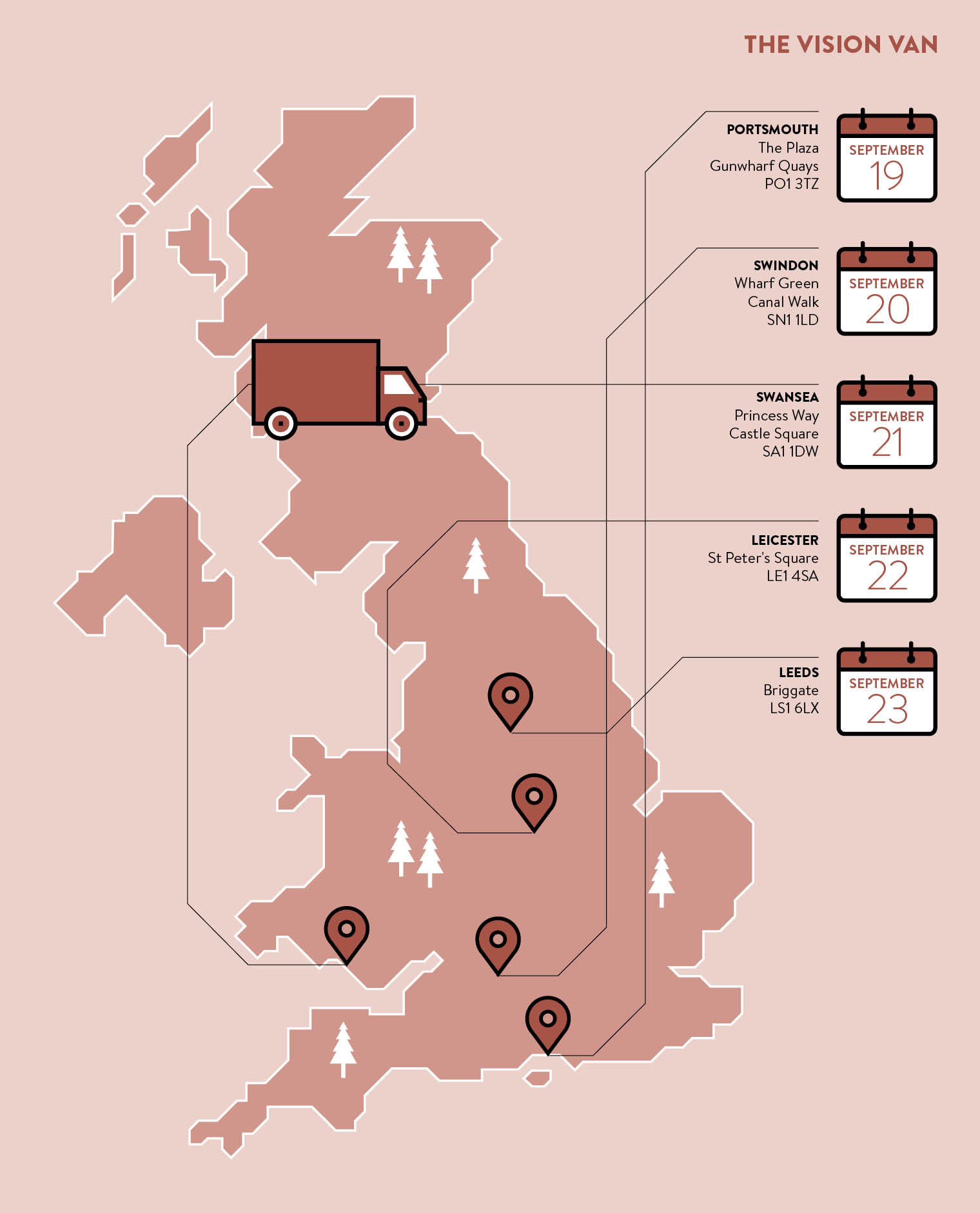 Across the country, users of the Vision Van were surprised and reassured by their experience, with some going for further health checks as a result

The newbie: Chloe Emmerson of Houghton-le-Spring, Tyne and Wear

Chloe, a worker at the Washington Moto service station, where the Vision Van set up for the day, took advantage of the free test after a colleague suggested it. This was her first eye examination and Chloe says: “I’ve never thought my eyes needed testing. I just assumed they were fine. Now I tell all my friends to get their eyes tested too, just to make sure.”

Result: The test revealed a freckle on the back of her eye, a common, pigmented growth, similar to a mole, for which she was referred to her GP.

Jayne works at South Mimms service station and relies on driving to get to work every day; however, she hadn’t had an eye test since she was at school. Jayne says: “You think you’re infallible: you change your hair, you update your clothes, but you never think about your eyes changing. The eye test was reassuring. I feel quite comfortable, everything was normal, I just need glasses.”

Result: The test revealed Jayne needed a new prescription. Optometrist Hannah Cooper who performed the eye test says: “Jayne came in with concerns about her left eye and I was able to assure her that everything was normal; her eyes were healthy. It was just a matter of updating her glasses.”

Zaqer knows that eye tests are important, as his father has diabetes and books regular examinations so any damage the disease might be causing to delicate eye tissue can be picked up quickly. But like many, Zaqer admits to putting off his own appointments. He says: “I was out shopping and noticed the big, bright Vision Van. I thought I’d pop in and take advantage of the free eye test as it’s been such a long time since I last had my eyes checked. I just kept putting it off. I didn’t realise that the test could check my health as well as my eyesight.”

Result: Zaqer was referred to his GP after optometrists discovered he may be suffering from high cholesterol. This is identified by looking at the blood vessels in the eye, sometimes causing blockages and patches of lost vision.

Claire had been suffering from headaches and knew she was overdue for an eye test after three-and-a-half years. She says: “In my job as a computer-aided design technician, I spend eight hours a day staring at a computer screen. The optometrist told me that all the zooming in I do on designs is straining my eyes. I was told I need to wear glasses when I’m working on a computer, reading or looking at my phone.”

Result: Claire was given a prescription for glasses and advised that her symptoms would alleviate within weeks.