Today, more of us than ever before anticipate having a second or even third career. A chance to learn new skills, increase our salary and to explore a new aspect of the world of work mean the old idea of a job for life is seen as less of a reassurance and more of a millstone.

One profession that is at the forefront of this trend is project management. New figures released by the Association for Project Management (APM), the UK’s leading professional body for project managers, show that more people than ever are moving into the sector from other careers – and many of those within it are enjoying new opportunities.

“Project management is evolving not just because of the new opportunities that it offers, but also thanks to the entry points from other professions,” says Scott Walkinshaw, head of communications at the APM. “More and more bright, energetic and talented people are realising that modern project management is more easily accessible than ever before as a career.”

Around half of respondents (54 per cent) to the latest APM Salary and Market Trends Survey have worked in a project management role for fewer than ten years, with about a third (31 per cent) chalking up less than five years.

The survey confirms that an increasing number of those coming into project management have arrived in their current role from professions such as engineering (30 per cent), operations management (13 per cent) and administration (10 per cent).

So what’s driving this trend? The survey highlights a wide variety of job roles on offer as well as different sectors in which talented, ambitious people can make their mark.

As well as project managers (38 per cent), respondents were found to be working in programme management roles (15 per cent) and project support roles (14 per cent). In fact, the largest increase was in project support roles, compared with last year’s results. Sectors, too, were widely spread. Alongside traditional engineering projects, there was growth in emerging sectors such as transport and logistics. And for those looking to work abroad, the results identified hotspots across the European Union. 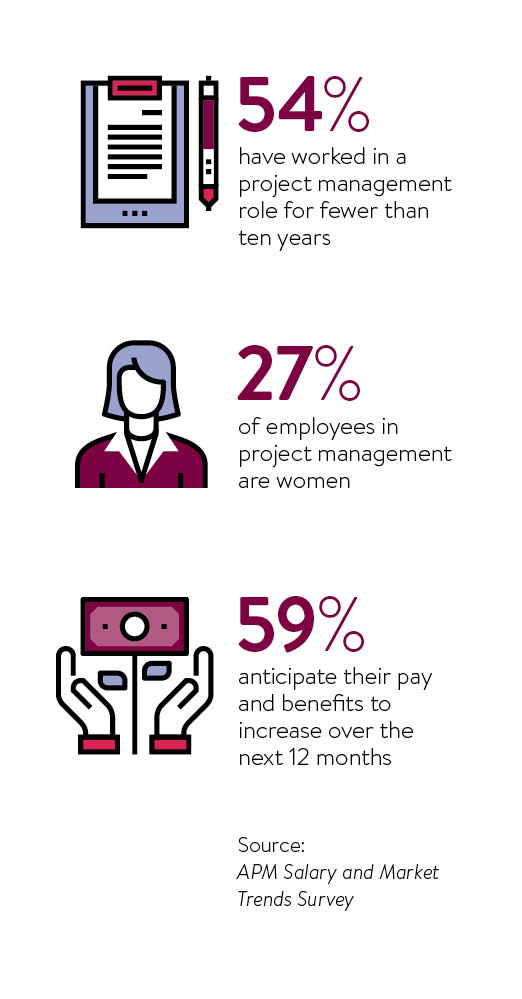 Opportunities for women also stood out, underlining the fact that project management is a thoroughly modern profession, free from the shackles and stereotypes typically associated with more traditional counterparts. This is reflected in the number of women in project management (27 per cent), compared with engineering (9 per cent), according to recent statistics released by the Women’s Engineering Society.

Professionalism in the shape of qualifications and ongoing development were noted as significant drivers. Almost half (45 per cent) of those asked in the APM survey hold an APMP, a knowledge-based qualification that enables candidates to demonstrate knowledge of all elements of project management, and how they fit strategically and commercially.

Qualifications such as these allow those accessing the profession to gain the key skills and knowledge needed to bolster their previous expertise in order to manage and lead projects.

As a result of this increase in skills, almost six in ten (59 per cent) anticipate their pay and benefits to increase over the next 12 months.

We’re seeing more and more talented individuals taking up roles and developing their careers because they realise project management is a fresh, modern profession

The rise in professionalism and the value to both employees and employers of professional qualifications are clearly demonstrated in the survey’s findings on remuneration. The median salary among those responding to the survey is £50,000, with 10 per cent earning £75,000 to £99,999.

Their annual gross base salary, according to the findings, is around £52,000, compared with £46,000 for those who aren’t members of the APM, while additional annual benefits are £6,000 and £5,250 respectively. The largest group (15 per cent of those asked) received benefits of £7,501 to £10,000. Considerably more than half (59 per cent) expected their salary to rise “significantly” or “slightly” over the next 12 months. As well as rising salaries, the survey also shows that those who had been in project management longest were the most satisfied.

However, perhaps the biggest draw is the chance to be part of a fast-paced, ever-changing profession.

Mr Walkinshaw concludes: “We’re seeing more and more talented individuals taking up roles and developing their careers because they realise project management is a fresh, modern profession, which is not only widely accessible, but also offers huge potential whatever your background and experience.”

DEMAND FOR PROJECT MANAGERS IS GROWING

Britain needs more experienced project managers with a growing number of professional skills that can help them to deliver larger, more complex projects than ever before.

March saw the publication of the government’s National Infrastructure Delivery Plan which, for the first time, set out its plans for this Parliament’s large-scale regeneration and housing projects, as well as its investment in new local schools, hospitals and prisons.

The plan incorporates the latest version of the National Infrastructure Pipeline which outlines more than £425 billion of investment in over 600 major projects across the UK during the next decade or so.

It will be largely down to the new blood pouring into project management, alongside the existing talent, to make sure these vast and essential projects are delivered on time and on budget.