Trends in cosmetic procedures may vary globally depending on ethnic preferences, but the fundamentals of health and beauty are universal

Some 20 million surgical and non-surgical cosmetic procedures were performed worldwide in 2014, according to latest figures from the International Society of Aesthetic Plastic Surgery (ISAPS) which has more than 2,700 certified surgeons in 95 countries.

Not a huge surprise that it was women who committed to the knife, needle and beam, with ISAPS reporting more than 17 million cosmetic surgeries globally, representing 86.3 per cent of the total. For non-surgical cosmetic procedures, Botox was top of the list for both men and women.

So what is everyone having done?  Breast augmentation has the highest global tally among women, with liposuction second and eyelid reduction (blepharoplasty) the most popular surgery for men.

Women are opting for ‘mummy makeovers’, where two or three cosmetic surgery procedures are performed in one operation

North America still leads the way with more than four million procedures carried out every year. An American Society of Plastic Surgeons (ASPS) 2014 survey showed 286,254 breast augmentations were performed. And 24.7 per cent of all Botox procedures in the world are in America.

Is the choice of procedures determined by geography? “What women and men are looking for in terms of cosmetic surgery does vary according to where they live,” says Martha McCully, an American beauty expert and founding beauty director of Allure magazine. “In New York City, youth-enhancing cosmetic surgery is popular. The standard is an eye lift performed in the doctor’s office, or neck or breast lift.”

Ms McCully adds that there are “tribes” of different looks across the United States. “So if the look in Manhattan Beach, California, is to have perky but not large breasts, then there will be an awful lot of 40-somethings getting similar implants,” she says. “Hollywood, Beverly Hills and Malibu seem to show it off a little more than New Yorkers, in my opinion. On the Upper East Side of New York, if women don’t work but they want to maintain a look, they are going to the same surgeons for their eye lifts and breast lifts.” 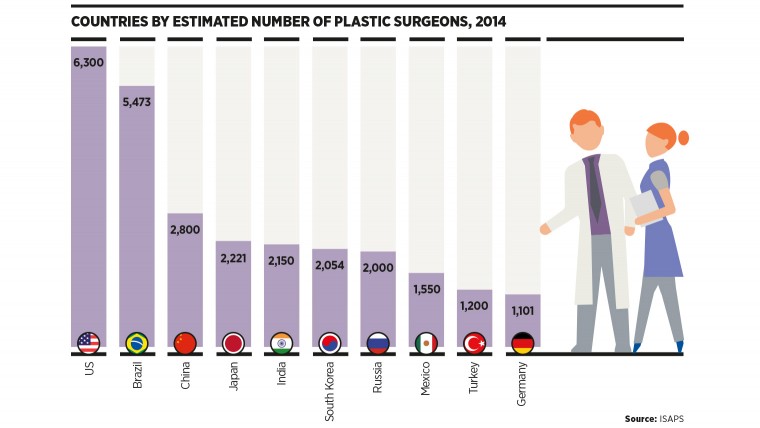 On the other side of the world, there are a lot of people seeking non-surgical cosmetic solutions for sun damage and pigmentation problems, according to Shonagh Walker, a beauty journalist, based in Sydney. “Increasingly, women are opting for ‘mummy makeovers’, where two or three cosmetic surgery procedures are performed in one operation,” she says.

Globally we are now seeing the influence of new technologies and procedures, along with social and cultural influences, that have led to particular trends emerging. Iranians want rhinoplasty, Brazilians go for buttock enhancements, Germany has the most penile enlargement surgeries worldwide and in South Korea there is a trend to have a baby face combined with a womanly body (so-called bagel girls – baby faced and glamorous). And it is worth noting that more than a third of South Korean 20-somethings have had a cosmetic procedure of some sort.

Cosmetic surgery expert Wendy Lewis, who advises clients worldwide on cosmetic surgical and non-surgical procedures, says: “The internet is the great beauty equaliser for research, but ethnic traits are considered to be beautiful. In South Korea women look to reduce their cheekbones, using Botox to create a slimmer jaw line; in China women use Botox to reduce the circumference of their calves and in Japan nasal implants are still popular.”

UK consultant plastic surgeon Simon Withey adds: “Twenty years ago it seemed there was a strong tendency for patients to request ‘Westernisation’ of features. Now patients are much more likely to identify with someone with similar ethnicity, but whose features they prefer to their own.”

“There is a pattern and it changes not just on cultural grounds, but also on grounds of availability,” he says. “If a new procedure becomes available then people think they have a problem. For example, when it comes to using fillers in lips people didn’t realise they had small lips until there was a means of making them fuller.

“In terms of different nationalities, the Iranians in my view have splendid large, refined noses and look aristocratic, but many of them want a hump reduced. Middle Eastern men are more concerned now with their looks and want eyelifts, plus they tend to be pot-bellied and want liposuction.

“With my female Indian patients, the abdomen is bared in their clothing so that becomes a focus with many wanting liposuction. I see a lot of Russian girls who want bits of liposuction and breast surgery – many are newly divorced so they come in to get their confidence back. We also get a few Chinese clients who say they don’t trust Chinese surgeons.”

In terms of procedures worldwide, Brazil is second after the US. Buttock augmentation (gluteoplasty) is a national obsession and of the 319,960 procedures performed globally in 2013, 63,925 were by Brazilian surgeons, according to ISAPS. They even have a beauty contest called Miss BumBum and procedures are tax deductible based upon their ability to enhance mental and physical wellbeing.

South Korea is ranked as having the highest number of cosmetic surgery procedures per capita globally. Double eyelid surgery (blepharoplasty) is popular to create bigger and wider eyes. Jaw reshaping and rhinoplasty is also sought after. Cosmetic surgery clinics in Seoul have names such as Small Face, Wannabe and Magic Nose.

Germany has perhaps the most surprising cosmetic surgery trend with ISAPS figures showing 2,786 penis enlargement treatments were performed in 2013, which was significantly more than in any other country. Venezuela was second with just 473 procedures. 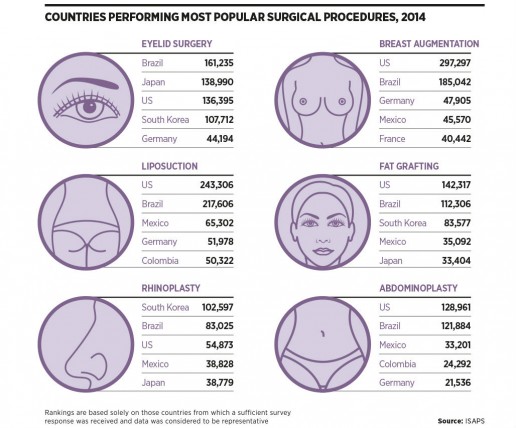 Tehran is often cited as the world’s “nose job capital” and in 2014 Iran was among countries with the highest number of rhinoplasty procedures per capita globally. “Around 200,000 rhinoplasties are performed every year in Iran, with a view to create a dainty slightly up-turned tip,” says Sultan Hassan, medical director of Elite Surgical. “It is almost regarded as an indicator of elevated social status with documented accounts of patients wearing their nasal splints long after the week recommended.”

But recently state-run Iranian television announced it wouldn’t use actors in films and TV shows if it was obvious they had undergone cosmetic surgery. However, according to Mr Hassan: “The public are intrigued by what their favourite star may or may not have had done. There is a relation between socio-economic affluence and celebrity media awareness with demand for cosmetic surgery.”

Cosmetic surgery adviser Ms Lewis concludes that despite some regional variations, the basics of what is considered attractive do not differ that much globally. “Healthy, even toned skin is considered beautiful no matter where you live,” she says. “Plus, women everywhere are still bothered about carrying extra weight on their tummies, waist, hips and thighs. For men, it is always more about good hair and a slim waistline.”