Water access is not fair. An average resident in the United Arab Emirates, home to golf courses in Dubai, consumes 550 litres of water a day. A pair of Levi’s 501 jeans uses 3,781 litres in its life cycle. At the same time, more than 600 million people lack access to safe water worldwide, plus three times that number have to use a source of drinking water contaminated by faeces.

In response, the first Action Day for Water in the history of United Nations Climate Change Conferences took place in November, at the COP22 summit in Marrakech.

Countries had identified water as being key to adaptation in 93 per cent of their national climate action plans or intended nationally determined contributions.

A priority of the Water Day was climate justice, marked by the launching of the Water for Africa initiative, with potential social ramifications of scarcity and stress spelled out by Dr Charafat Afailal, minister in charge of water for Morocco. “We need to realise what is at stake, since water insecurity leads to increased conflicts, tension between populations and provokes migration that threatens overall stability,” she says. 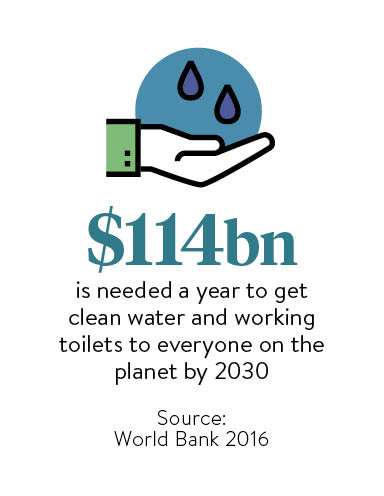 The universality of water issues seems almost incontrovertible, observes Eleanor Allen, chief executive of Water For People, a non-profit international development organisation. “Water is one element that connected nearly all 17 global sustainable development goals (SDGs). The dedicated water goal SDG6 – ensure availability and sustainable management of water and sanitation for all – is critical for social progress.”

However, she also questions how it can be that with all SDGs targeted for completion by 2030, we still find ourselves in 2016 with so many lacking access to safe water and sanitation.

Some 2.4 billion people, nearly one third of the global population, currently lack access to a toilet or latrine. The scale of the problem remains a daunting prospect to fix, Ms Allen concedes. “It will take $114 billion a year for the next 14 years to get clean water and working toilets to everyone on the planet and meet SDG6. Getting everyone safe water and a toilet, forever, is a much greater challenge,” she says.

Business risks are huge, from direct impact of drought on processes and production to restrictions on effluent discharges as a result of lower river flows

Within the corporate sector, the business case for water stewardship has already won acceptance among some of the more progressive market leaders. In 2014, Marks & Spencer became the first retailer to receive triple certification by the Carbon Trust for water, carbon and waste. One year earlier, prime-mover status in hospitality went to Whitbread, owner of such chains as Costa Coffee, Brewers Fayre and the UK’s largest hotel brand Premier Inn.

For organisations taking water conservation seriously, efforts go beyond just low-water taps and dual-flush toilets, says James Pitcher, corporate social responsibility director for Premier Inn and Restaurants. “Whitbread is a fast-growing company and we must be sensitive to the impact we have on the environment. One of the ways we are doing this is by minimising water consumption, which is why we’ve committed to improving water efficiency by 20 per cent by 2020. We now have 59 water recycling systems at Premier Inn, which result in a 92,444 cubic metres annual saving.”

General levels of action and even awareness among the business community are, however, much less impressive, says Professor Jacob Tompkins, managing director of Waterwise. “Business risks are huge, from direct impact of drought on processes and production to restrictions on effluent discharges as a result of lower river flows,” he says.

“But most businesses are unaware of the threat. They don’t realise things like transport and power are impacted by water scarcity, and don’t consider the water needs of their data centres and distribution hubs.”

Professor Tompkins calls for a non-party-political UK approach to water at government level that is both strategic and holistic, rather than tactical responses to extreme weather events. He does not believe in simply throwing money at grand projects. “The answer is certainly not more reservoirs, a national water grid or other big infrastructure projects; it requires distribution infrastructure,” he says. “It needs us to work with nature, reconnect rivers to their environment and slow them down to reduce flooding, but also increase recharge of our aquifers. The solutions to floods and droughts are the same.”

He also champions the need to retrofit homes for resource efficiency, water security and utility bill reductions. Rainwater harvesting would help with water storage and runoff, plus smart technology could cut leaks and optimise usage.

These options are available now, but the real catalyst for water sector transformation is the culture shift and behaviour change needed to go with them. Professor Tompkins concludes: “The future is positive, but it will require a fundamental change in attitudes and policies. People are interested in water, but we have not communicated the issues properly.

“Many of the problems we face require mass engagement, from water efficiency to blocked sewers. We should use the power of new media and the internet of things to provide people with information and enable them to take actions that aggregated together provide solutions to things like floods and droughts.”

Water is a shared resource, but will need to become a shared problem if we are to move towards an equitable solution.