How India is leading the smart city revolution

The age of the smart city is dawning and for many this creates images of a highly automated and digitised metropolis in the rich countries of the developed world.

But the concept is being applied across the world, with many of the most ambitious smart city initiatives taking place in Asia.

For example, India’s prime minister Narendra Modi has launched a Smart Cities Mission to develop 100 smart cities over the next five years. India faces one of the biggest urbanisation challenges in the world, with only 30 per cent of the population currently living in cities, but some 300 million people – almost equivalent to the population of the United States – expected to arrive over the next 15 years.

“India is a great greenfield site to try out smart city initiatives,” says Ms Prakash. “It’s very interesting to see how countries are almost leapfrogging the developed world in terms of how they gather data. There is a big onus on using low-cost technologies that can be scaled up more quickly.”

The Smart Cities Mission is offering the successful cities a share of a £5-billion pot of government money, but they will have to raise further funds from the private sector. “Overall, £24 billion worth of investment is expected across 100 cities over the next five to seven years,” says Niraj Saraf, connected cities mission lead for Innovate UK, which has just taken a group of smart city entrepreneurs to India to coincide with prime minister Theresa May’s visit.

The purpose of the Smart Cities Mission is to drive economic growth and improve the quality of life of people by enabling local area development and harnessing technology, especially technology that leads to smart outcomes. According to the Indian government: “The objective is to promote cities that provide core infrastructure and give a decent quality of life to its citizens, a clean and sustainable environment and application of smart solutions.” 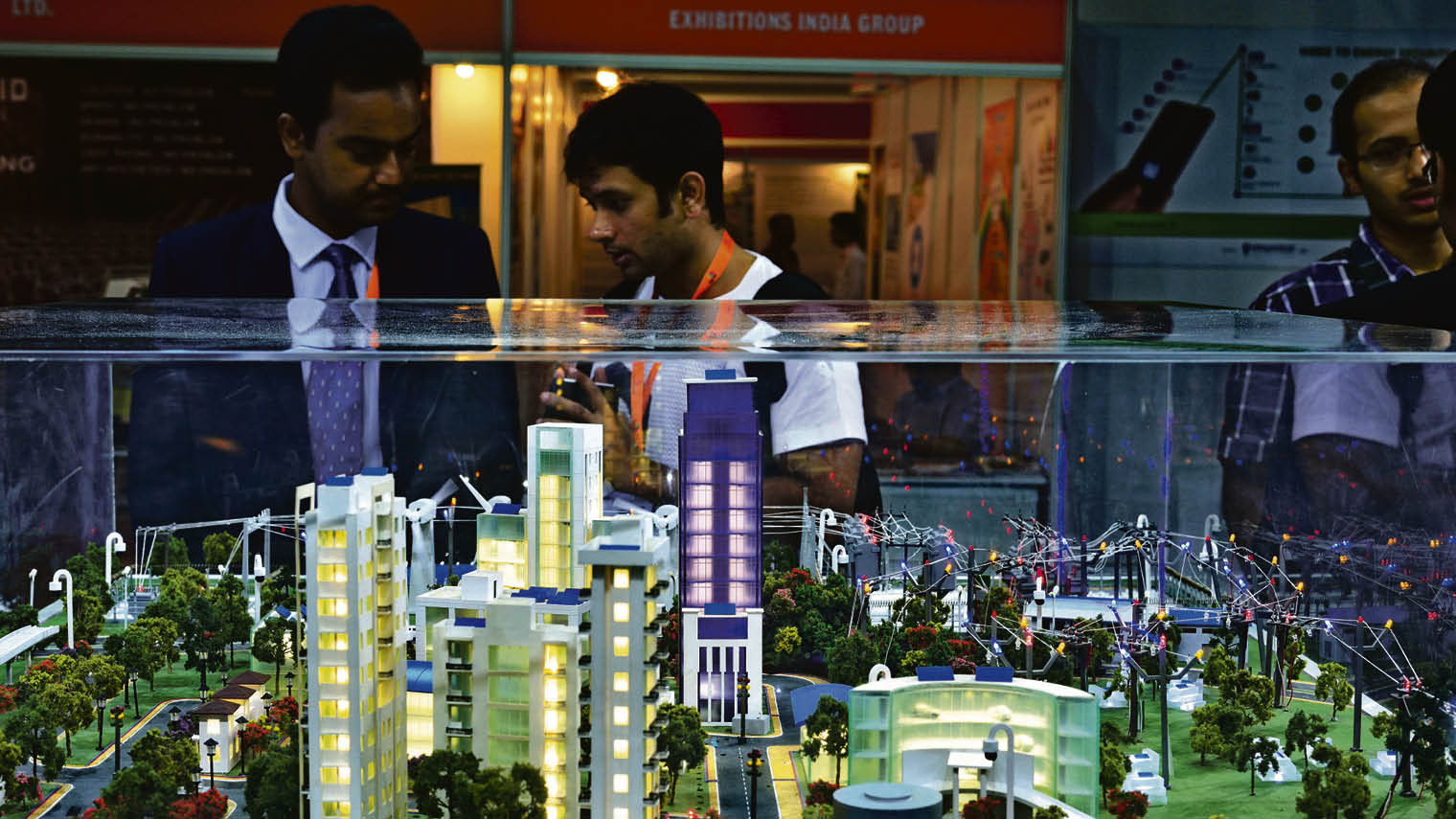 However, because the bidding cities were in competition with each other, each one took a slightly different approach. “Because they were competing for funds, they really tried to create a unique identity that played to their strengths,” says Ms Prakash.

Even if Indian cities are setting out from a different starting point, Mr Saraf says, there is a very similar view on what a smart city is. “In a city with only two hours of mains water a day, an open data store isn’t really a priority. But, just as in the UK, there is a recognition that there must be a citizen-oriented approach. You have to engage people, not just push technological solutions,” he says. The most successful smart city initiatives focus on finding out residents’ priorities before anything else.

Richard Howells, chief executive of Bronze Labs, another company that accompanied Mrs May to India, says: “You need to take a bottom-up approach to create a smart city.” Bronze Labs focuses on increasing city resilience by sharing data and “connecting people to people, people to things and things to things” in emergency situations such as floods and other natural disasters. But this also has more prosaic applications such as telling people if their bus or train is going to be late, or reporting potholes to the local authority.

“It’s about accountability,” Mr Howells says. “If you can see something is being done, it makes you feel that you are involved in how your city is being run.”

One challenge for India’s cities is to overcome the digital divide. While in the West this issue is often seen in terms of the elderly missing out on the benefits of digital technology, “in India and China there are a lot of people at different levels of digital access”, Ms Prakash points out.

India is now the second-biggest market for smartphones in absolute terms, with more than 220 million subscribers, but as a proportion of the population this is still less than 30 per cent.

Nonetheless, Europe is likely to look to Asia for smart city solutions because the region will demonstrate how to scale up low-cost technology solutions quickly. Ms Prakash concludes: “I would really bet on India and China to come up with the innovations in this space. There is a level of reception of new technologies and a curiosity about how technology can improve lives, while in Europe there is scepticism about technology because people are not keen to have change.”