As the cars line up for the start of the 2016 Formula 1 season at theAustralian Grand Prix in Melbourne, F1 is accelerating towards future growth, despite controversy on and off the track

Formula 1 seems to thrive on controversy. Just weeks before the start of the 2016 season it was unclear what format qualifying would take and new regulations for 2017 were being tested in the face of complaints from competitors.

But whatever happens on the track, the sport’s parent company is heading in the right direction of profit – not loss.

The latest accounts available, for the year ending December 31, 2014, show F1’s parent, Jersey-based company Delta Topco, made operating profits of $519.8 million on revenue which accelerated 3.2 per cent to a record $1.8 billion. There are several tricks under its bonnet which have fuelled this growth despite a stagnating economy.

F1 doesn’t own any tracks or teams so its costs are kept under tight control. The company only has around 352 staff and its biggest single cost is a payment of 63 per cent of its gross profits to the teams as prize money. Over the five years to 2014 the prize money payment rose by 31 per cent to $863.1 million due to a boom in interest in F1. It is a staggering sum, but as it is a profit share, it mitigates risk for Topco. That’s not all. 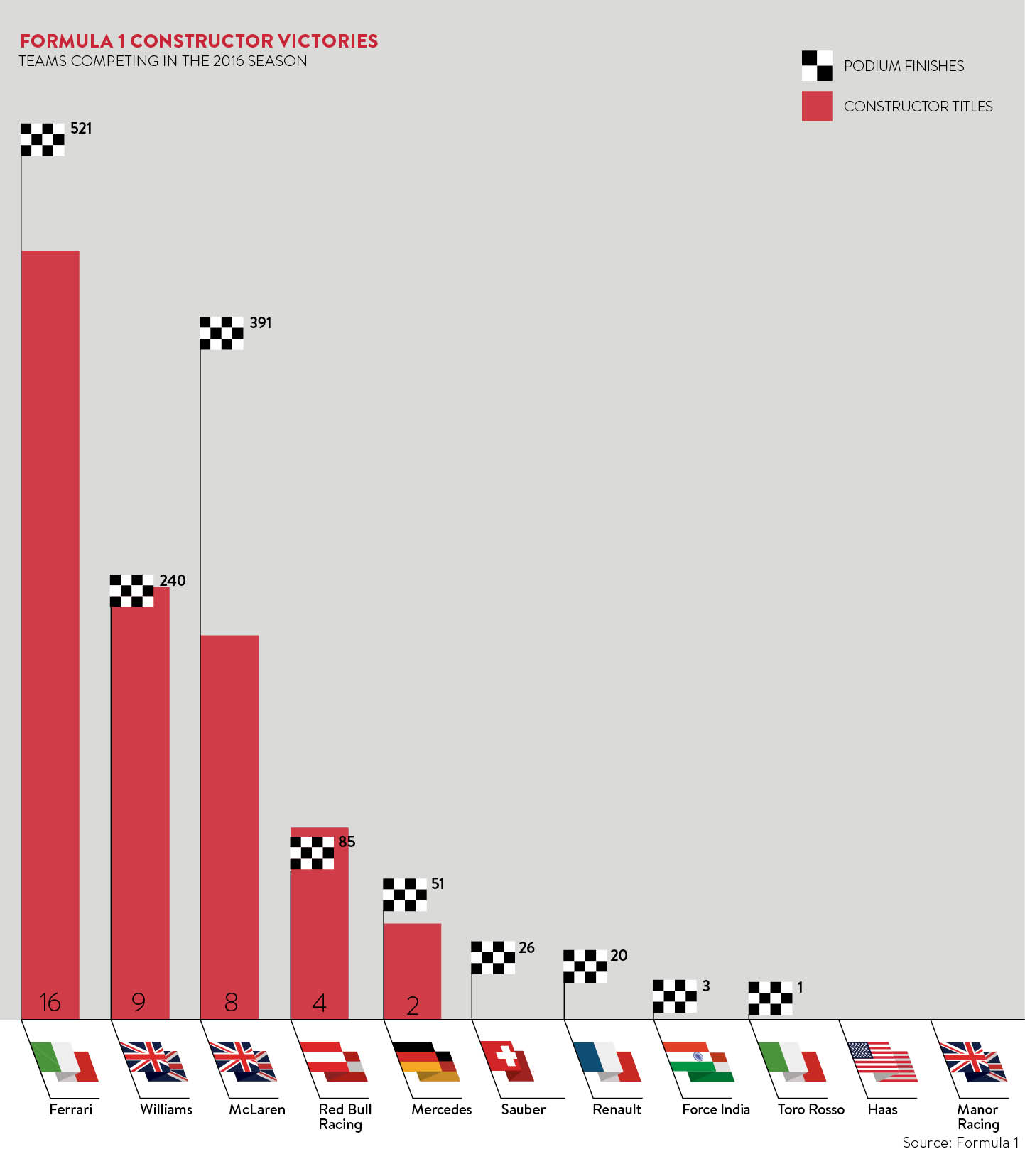 Only 10 to 20 per cent of Topco’s contracts need to be renewed annually as they have an average length of around five years. To insulate against inflation, the key contracts also contain an escalator clause which increases the amount paid by 10 per cent annually.

This makes F1 very different to other sports companies and teams as its performance is not related to the events on track. It gives it a stable outlook and has driven Topco’s valuation to $8.6 billion, according to figures from minority shareholder Ferrari.

The Italian motor marque listed on the New York Stock Exchange in October and this led to an increased level of financial disclosure for the company. Its main involvement in F1 is through its famous racing team which features former champions Sebastian Vettel and Kimi Räikkönen as its drivers.

However, Ferrari also has options on a 0.25 per cent stake in Topco and has had to release a valuation of it under its IPO obligations.

It shows that between December 31, 2014 and September 30, 2015 the valuation of the options increased 1.7 per cent to $12 million giving Topco an equity value of $4.8 billion. The company had around $4 billion of debt last year with at least $200 million in cash in the bank giving a net of $3.8 billion. Added to the equity this gives Topco an enterprise value of around $8.6 billion.

It surprised many in F1 with one sports writer wrongly suggesting the value is inflated and claiming that “the price is clearly too high”. This overlooked the fact it is based on an independent valuation from Ferrari, which is required by the stock exchange, so it is far from inflated.

F1’s fortunes have actually been boosted by a steady stream of new races. Russia and Austria joined in 2014, while Mexico returned after a 23-year break in 2015 and Azerbaijan is the new entry for 2016.

It is part of a savvy strategy from F1 chief executive Bernie Ecclestone who has taken the sport and its 425 million television viewers to emerging markets where it is used to drive tourism. The limited number of slots on the F1 calendar has fuelled a bidding war in the amount countries are prepared to spend to get a race with the highest hosting fees rising to more than $60 million annually.

Together, fees from race hosting and broadcasting amount to $1.2 billion of F1’s total revenue with a further $161 million coming from TV production, as well as travel and freight services to the sport’s ten teams.

Revenue from the sale of tickets to F1’s corporate hospitality outfit the Paddock Club grew 4.9 per cent to $110.9 million last year. It attracts some of the world’s wealthiest high rollers with recent guests including Michael Douglas, film-maker George Lucas and Mexican billionaire Carlos Slim.

Corporate hospitality revenue increased by $5.2 million to $89.2 million. F1’s chief financial officer Duncan Llowarch says it was “largely driven by the effect of 2014’s calendar changes, with results from new races in Austria and Russia outperforming results from non-recurring prior-year events in Korea and India”.

Advertising and sponsorship received a similar boost. F1’s portfolio of partners includes luxury watchmaker Rolex and the Emirates airline which get benefits such as hoardings at the tracks and the right to use the sport’s logo in advertisements. Although F1 lost technology partner LG last year, it more than made up for it, according to Mr Llowarch.

“While the prevailing economic conditions continued to result in a difficult environment for advertising and sponsorship sales during 2014, the company was successful in renewing one significant contract on improved terms which, along with annual uplifts in other contracts and the sale of a small number of additional advertising packages, more than offset the loss of one material advertising partner. These arrangements allowed the company to report advertising and sponsorship revenue of $254.4 million in 2014, which was $13 million (5 per cent) higher than the prior year,” he says.

The power under F1’s bonnet has boosted its revenue by around 80 per cent over the past decade and, with long-term contracts in place, there is no suggestion it is slowing down. No doubt the naysayers won’t slow down either, but they’re unlikely to cause F1 to crash.