The world’s most beautiful buildings

Buildings have the power to transform a space into a place. Whether consciously or not, we all make an emotional connection with the buildings in our milieu. For some this connection may have been established the first time they set their eyes on the glittering Taj Mahal, framed by the arches of the entrance hall. For others, the towering dominance of the Empire State Building is printed in the depths of their memory, reminding them of the foundations of New York’s economic and cultural leadership.

So, what makes a building beautiful? Clichéd as it may sound, beauty is truly in the eye of the beholder. Our individual tastes and personal journeys make us unique and the 1,200 votes in our survey have revealed architectural treasures from far and wide. From the East to the West, remnants of ancient civilisations feature alongside modern high-rise structures. Travel with us through our readers’ pick of the world’s most beautiful buildings, there may even be some undiscovered gems and surprises along the way.

The Taj Mahal, one of the New Seven Wonders of the World, unsurprisingly topped the list. The tragic splendour of the love story of the Mughal Emperor, Shah Jahan, who built the mausoleum as an ode to his immense love for his wife, Mumtaz Mahal, continues to marvel us even today. Across the Yamuna River lie the foundations of the uncompleted Black Taj Mahal, which legends say Shah Jahan began constructing due to his obsession with symmetry.

Over the years, international royalty has flocked to see the ‘Jewel of India’; Prince William and Catherine, Duchess of Cambridge, being the latest couple to be photographed on Diana’s bench. 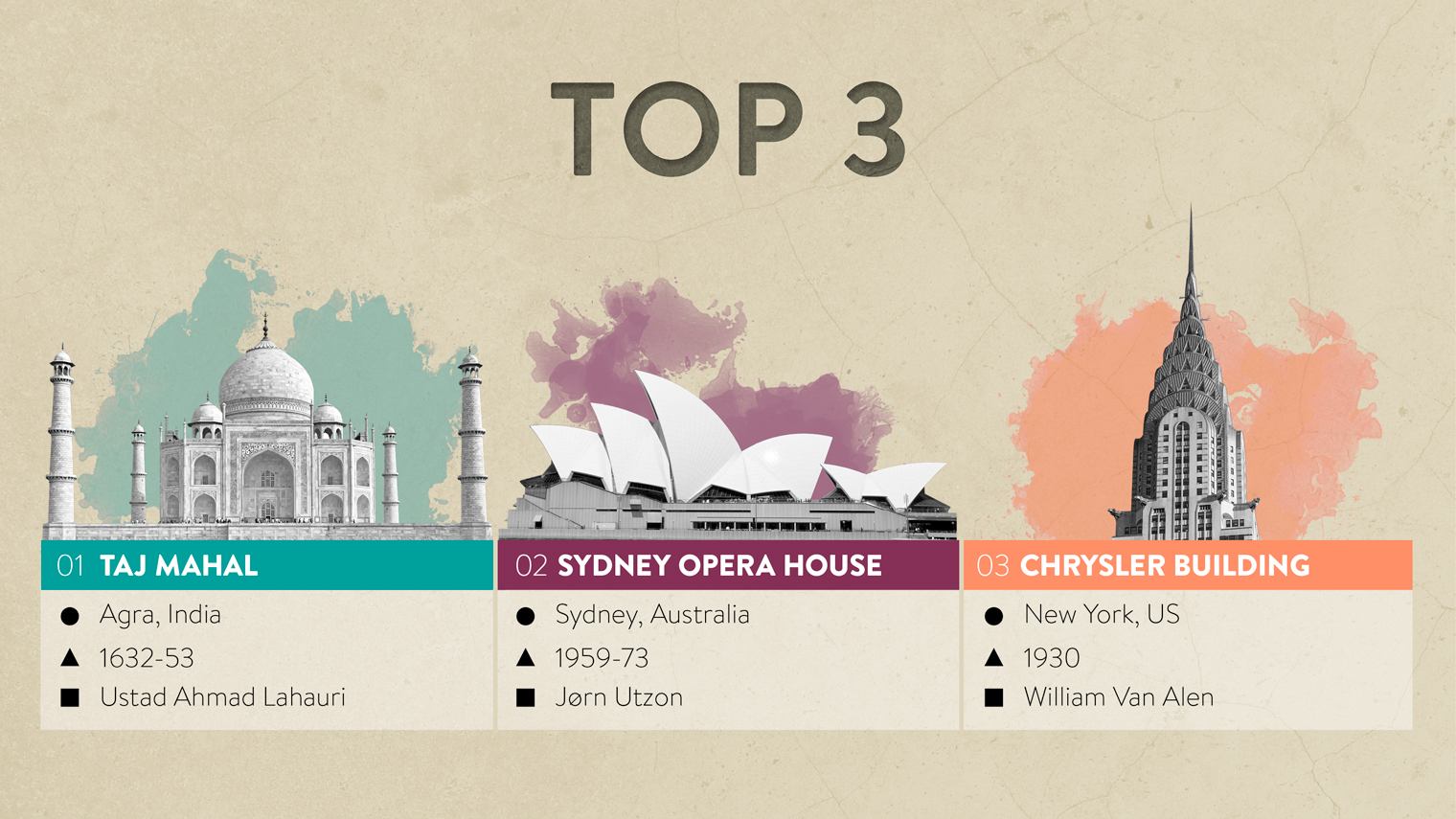 In second place is Sydney Opera House, a UNESCO World Heritage Site since 2007 and the heart of Australia’s New Year’s Eve fireworks display broadcast to the world. The building was opened by Elizabeth II, Queen of Australia in 1973.

Also in the Top 10 are The Shard, Burj Khalifa and Burj Al Arab, testament to man’s inherent desire to view cities from great heights and a position of power.  The Eiffel Tower, originally constructed for the 1889 World Fair, takes seventh place. It too held the title of the world’s tallest structure until the construction of the Chrysler Building 41 years later.

Among the Top 20 are six religious buildings, including Antoni Gaudí’s incomplete Sagrada Família. At the time of his death, less than a quarter of the gothic/art nouveau church was complete and the project is due for completion in 2026, a centenary after Gaudí’s death. The Alhambra, Angkor Wat and Hagia Sophia also in the Top 20 serve as reminders of the glory of ancient civilisations and the timelessness of beautiful architecture.

Though they didn’t quite make the Top 20, the following architectural wonders caught our eye. Here’s our pick of the most popular, unusual and under-the-radar buildings.

A reinvention of the great interior courts of Chinese antiquity, this building epitomises fluidity, immersion and envelopment.

City of Arts and Sciences

One of the 12 treasures of Spain, the city is situated at the end of the former riverbed of the River Turia and boasts a planetarium, science museum, oceanographic aquarium, opera house and nightclub.

One of the best preserved Ancient Roman buildings, the Pantheon has been in continuous use throughout history and is a church dedicated to St Mary and the Martyrs.

Built by a succession of Kings including Henry VIII and the training ground for Oliver Cromwell’s troops during the Civil War, the chapel features some of the world’s finest stained glass windows which had to be removed piece by piece during World War II.

See other Raconteur Surveys:
The Ultimate Dinner Party Guests
The World’s Greatest Storytellers
The Greatest Inventions of all Time