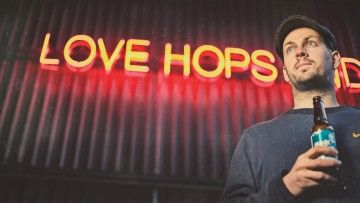 From our perspective, the economic environment for mid-sized businesses is just fine. We’ve averaged more than 100 per cent growth over the last five years, we’re on track for 80 per cent growth this year and, being only seven years old as a company, we haven’t known anything else. Our view is that it’s much better to be focused on what you’re doing, rather than think too much about the prevailing environment or market conditions.

We’ve never thought of larger, more established companies as having any kind of advantage over us. In terms of retailers, many are running their businesses badly, their offering is mediocre, their staff are dispassionate and disengaged, there’s a massive lack of choice in what they offer to customers and they employ an out-dated business model. That’s why there are so many pubs and bars closing.

Then, when it comes to the big breweries, you look at the way they bastardise their products and the callous disregard for the consumer. In lots of different sectors there are opportunities for companies who want to offer something better.

But I don’t see a disconnect between a mid-market business like ours growing and still staying true to its principles. The thing that motivates us and the thing that we abide by is the quality of the end-product – that’s where most of our focus is and will continue to be.

There’s nothing about growing from a mid-sized business and becoming a larger one that means passion can’t still be at the core of what you do. You just have to look at a company such as Sierra Nevada; they make 100 million barrels a year, so they’re a huge company, as big as some of the multinationals based in the UK, but they still make fantastic beers in the right way. They can be an inspiration for lots of companies.

It almost goes without saying that high-growth mid-market businesses are crucial for the wider economy. In fact, the main thing limiting the pace of our growth is that we can’t hire staff quickly enough. The main obstacle is not just maintaining, but enhancing, our company culture over the next 12 months while adding 500 people who are motivated, skilled and passionate.

In the past, the biggest hurdle for us to overcome – and this will be true for many businesses of a similar size – was financing our growth. The global financial meltdown meant that, in 2009 and 2010, we were coming up against a brick wall. That forced us to think outside the box and come up with Equity for Punks, a scheme that allowed us to raise capital by selling equity to our customers. It’s not the same as being listed publicly or what most people understand as crowdfunding, but a completely alternative business model.

That constraint became a blessing in disguise. But our model is difficult to replicate. A few companies have tried it since we did and some of them have failed spectacularly. You need to have a strong customer base built up – we had a huge following on social media and had engaged with people in a number of ways before we launched it. Now we have 150,000 investors who are advocates too.

These days it’s not necessarily the size of a business that governs whether it’s successful or not. The businesses that are thriving are the ones doing things differently. You’ve got to offer something with passion and integrity; if you just do what others are doing it’s very difficult in any sector. But there’s reason to be confident for companies that are willing to work hard, persevere and go after those opportunities. 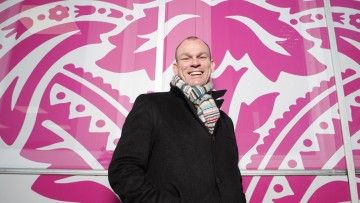 As a 68-year-old, two-family company, we’ve always taken the view that business has to be about long-term investment. We think about building something over ten or twenty years, not just two or three. In that respect, we have a good deal in common with the archetypal German model for mid-sized businesses or “mittelstand”. That philosophy has been credited with powering much of the country’s economic growth in the 20th and 21st centuries.

Because of their ability to take a long-term view, the UK’s mid-sized businesses are more important than ever. It’s been incredibly difficult over the last five or six years because the economy has taken a dive across the board. We don’t yet know how strong the recovery is going to be, but there were times when we didn’t know if there was going to be a recovery at all, so there’s cause for optimism. Many mid-sized businesses like ours will be confident of emerging from the recession with renewed strength.

In my view, the coalition government has done a good job of giving us confidence and sticking to the plan. Like me, the Chancellor George Osborne comes from a family that has built a wallpaper business. I imagine he grew up in a similar environment, living and talking business from a young age. So he must know what they day-to-day reality of it is like.

Right now, consumer confidence is high, but we’re starting from a low base, most of Europe is lagging behind, and it wouldn’t take much to make business people rein in their spending. That’s why we need to invest in growth for a sustained recovery, but we need the policies to encourage that.

When I spoke to him at the International Festival of Business in Liverpool, Trade and Investment Minister Lord Livingstone said that emphasis was being placed on “rebalancing the economy” in favour of sectors such as manufacturing. But this is a structural change that will take a generation. It’s not about forgetting financial services, or the service sector in general, because they are important. But it’s about having a manufacturing policy and investment policies that support growth in the regions and over the long term.

Again, I think we need to take our lead from mid-sized German businesses. They might be a bit more boring, because they take a long-term view and don’t tend to be on the public markets, but they have more influence.

One of the things I’d like to see is more help and incentives for mid-sized companies to train and invest in their staff. There’s plenty of assistance available for startups – and rightly so – but the best mid-market businesses with the potential to grow their people and their companies should be in line to benefit as well.

Export finance is another important area. The government talks about the “global race”, but if we are to compete and be successful in new markets overseas, more should be done. We’re currently developing a business in the Middle East, but it’s politically risky and we really need government-backed credit insurance at a reasonable cost. Tax incentives or capital allowance incentives on investment into products for overseas markets would be welcome too.

But mid-sized businesses can help themselves. For a couple of years now, we’ve been connecting and collaborating as part of a local business network of around 120 companies. People share ideas, talk and create a business-friendly environment. I think that’s where a lot of the best learning comes from because you see something in your neighbour’s business and you can use it in your own environment. That’s something that all of us in the business community must do more.

James Watt and Andrew Graham were talking to Edwin Smith