The unique Singapore Grand Prix, now nearly ten years old, continues to bring in global audiences and remains one of the most exciting events on the F1 calendar 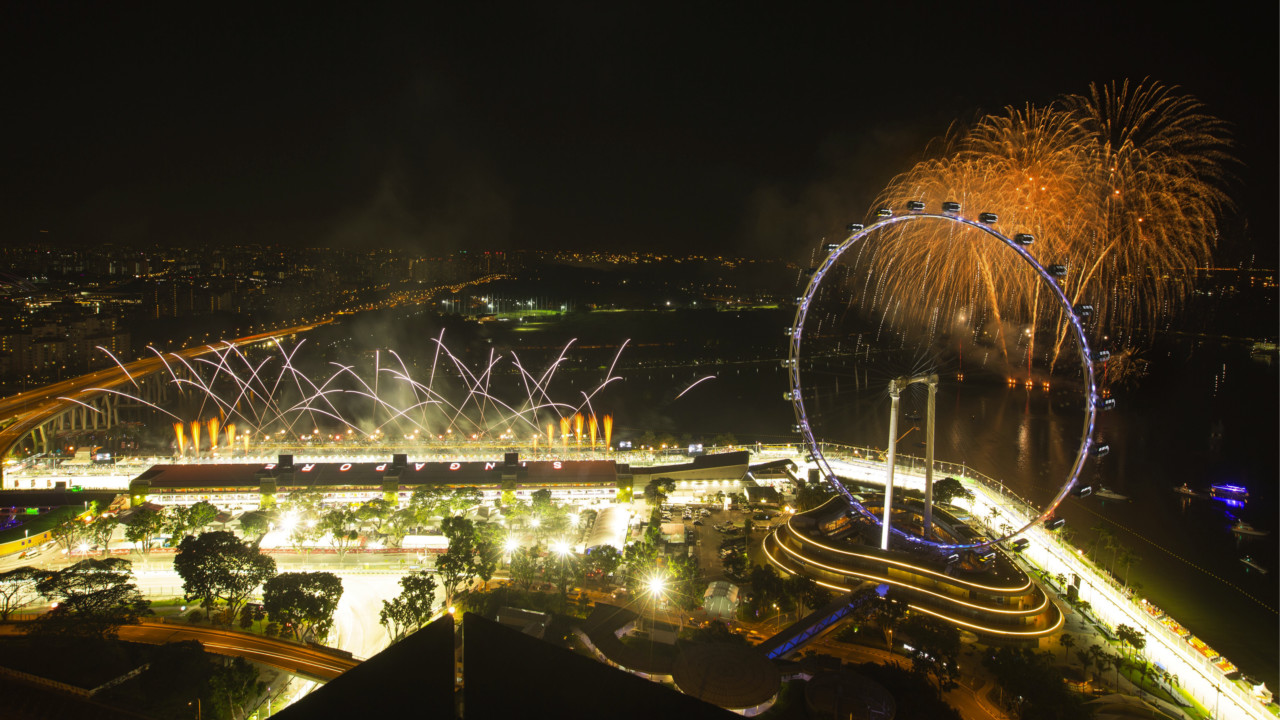 Ask an F1 fan for the most recognisable race and you’ll get two instant answers. There’s Monaco, obviously. The tight street circuit brings cars to a near-standstill as they swivel around hairpin after hairpin, super-yachts parked in the background and supermodels swaying in the foreground. The race is so old, running since 1929, it predates the World Championships.

And then there’s Singapore. The night race. The inky black circuit ablaze with floodlights. Cars race in saturated colour against a silhouetted world. In just a decade Marina Bay has become iconic. Unmistakable.

Today the concept of a night race is so popular it seems obvious. Not so back in 2008 when Singapore held the first race. The concept seemed a little too risqué. Doubters suggested the lights might fail or rain might bring the race to a halt. And then the lights went up, the first practice session began, and the theatrical qualities were immediately obvious. TV audiences saw the full cinematic effect. And the 300,000 on-site spectators got to party after dark in what turned out to be one of the most thrilling and controversial races in F1 history.

The reception was a sensation. McLaren’s then-chief executive Ron Dennis called it a “real big step in the history of Grand Prix racing”. Three-time world champion Sir Jackie Stewart said the race was such a triumph it put a new gloss on the motorsport series. The races since have been electric year after year. The ultra-high speeds combined with manic turns leads to a furious battle. It’s what you get when you create a track solely for F1 adrenaline. Lewis Hamilton calls it “my kind of track”.

And today? Singapore is a highlight on the calendar. There are two reasons for this. Huge investment in the fan experience has turned Singapore into a festival as a much as a race. Fans travel from all corners of the globe for lavish dining and partying. Where else can you dine like a Renaissance monarch before rocking out to Queen + Adam Lambert, Bon Jovi, and Katy Perry?

And there’s a serious side to Singapore too. The city state has carved out a reputation as the world’s most prosperous business hub. The World Economic Forum ranks it as the most open economy on earth. GDP per head is always in the top three of any ranking. The F1 race doubles up as a chance for executives to meet. A rival to Davos, with burning rubber rather than snow. The location makes perfect sense: a happy mid-way point for Australian mining executives, Japanese technology bosses, German manufacturers and British investors to meet on neutral ground.

300,000 on-site spectators got to party after dark in what turned out to be one of the most thrilling and controversial races in F1 history

Fusing the party and the networking together is the race itself – and here Singapore has a few secrets to tell. Fans know it as a perennial thriller. Not all know why.

The track design is key. The Marina Bay Street Circuit was designed to be complex and fast. It has more turns than any other circuits, necessitating a gruelling five thousand gear changes – half as many again as a normal circuit. The braking G-forces stack up to give the drivers a gruelling challenge like no other.

This year’s race should be more unpredictable than ever. The Fédération Internationale de l’Automobile (FIA) has tweaked the car design to ramp up speeds and downforce. Tyres are wider by 25 per cent, turning the 13-inch rear wheels from 325mm into 405mm monsters. The extra grunt and grip is estimated to drag down lap times down by 3 seconds. This in a sport where shaving off a tenth of a second is an engineering feat.

The result is a race weekend with more variety, more style, and more opportunities to connect with fellow fans and business colleagues than any other. The drivers adore it. Red Bull Racing F1 driver Daniel Ricciardo says: “There is something about night races, which makes them just different. Visibility is still the same, but you just see the sparks that come off the car better and it really is a good atmosphere in Singapore…for concentration it’s really impressive how much you need to stay focused for this race in particular.” Even non-F1 fans come for the unique atmosphere.

This year’s music includes full-length concerts by Duran Duran and OneRepublic, including debut Singapore performances by Ariana Grande, George the Poet, Lianne La Havas, Seal and The Chainsmokers. It’s why the Daily Telegraph says: “As an event, it is almost unsurpassed. It has quickly become one of the best on the calendar.” Yahoo7 Entertainment adds: “The Singapore GP may just be the best music festival ever.”

In just a decade Singapore has become a destination for all sports fans who want to experience first hand the excess, drama and finesse of this extraordinary night race.