The mechanics of an electric racing car

As the world’s first fully electric race series, Formula E’s revolutionary and innovative technology is at the forefront of its vision. The series has already begun to shape our automotive future through the ever-increasing success, durability and reliability of battery power and the benefits of its combustion-dodging electric motor.

While Formula E hasn’t had uniform praise, nobody can doubt the advanced technological innovation it has brought. Including the driver, the car weighs less than a tonne (896kg minimum), making it both agile and quick off the line. It goes from 0 to 62mph in just 3 seconds, with top speed limited to 140mph – these are quick cars, no question.

The standard Spark-Renault SRT_01E chassis that teams currently run will be substantially revised next season pushing performance further. Increases in efficiency and speed are on track to filter down to the road cars of the future, but the greatest impact is likely to be with the motors and batteries.

Despite having its eye on the future, it is two old Formula 1 hands in the form of McLaren and Williams which helped to spark the birth of Formula E. Behind the seat of each driver’s cockpit sits the motor from the groundbreaking McLaren P1 supercar, while nine-times F1 champions Williams have developed the lithium batteries that charge each car up to 200kw (or 270bhp, for comparison’s sake). They are far from off-the-shelf products.

Increases in efficiency and speed are on track to filter down to the road cars of the future, but the greatest impact is likely to be with the motors and batteries

Williams Advanced Engineering (WAE), the technology and engineering division of the Williams F1 team, was approached about supplying the batteries for Formula E in April 2013. The racing industry is a fast-paced business and Williams is at the leading edge of this. Testimony to this, it was able to provide 40 cars with batteries just 12 months after being selected for the job.

WAE was able to race to the mark because of its track record. In 2010 it began a technical partnership with Jaguar on its C-X75 supercar which was powered by a turbo-charged 1.6-litre petrol engine as well as two electric motors. Although the brakes were put on the project in 2012, WAE had done the groundwork on the batteries to power its motors by then. Back in F1, WAE manufactured its own energy storage mechanisms for the Kinetic Energy Recovery System (KERS) which was introduced in 2009.

WAE also designs and produces the hybrid systems which are slowly creeping into public transport, so developing battery technology for Formula E was a logical step in terms of research and development. According to WAE: “There is an adage that motorsport improves the breed. Formula E is an excellent opportunity to further our R&D and experience in designing and manufacturing battery energy storage technology, testing in a very demanding environment.”

While WAE remains tight lipped on the costs to make and buy one of its batteries, it is clear the process is painstakingly long and requires meticulous work.

“We can regularly manufacture a battery in 85 man-hours and that takes three to four technicians about two to three days per battery,” the company says. A large amount of this can be put down to manufacturing the battery’s own carbon fibre monocoque, which must be capable of passing a crash test – a first for any battery in racing history. This is cutting-edge engineering at its finest.

“The battery management system is state of the art and has been developed completely in-house – and is an evolution of the system initially developed for our F1 KERS. Our thermal management system is also very sophisticated and innovative,” says WAE. It is one of the biggest challenges with producing the batteries.

“The batteries have to work in a specific temperature window – too cold or too hot and you do not get peak performance, so we have a design that can keep the batteries within this window and keep them cool when pushed hard,” the company says.

WAE has high hopes for the future of battery technology in Formula E. In five years it expects the batteries will have double the energy density of any current lithium cell while the total weight of the battery pack will half. This will be driven by an expected 40 per cent increase in knowledge of battery chemistry, which will ultimately trickle down into our everyday appliances. That is the real power of Formula E. 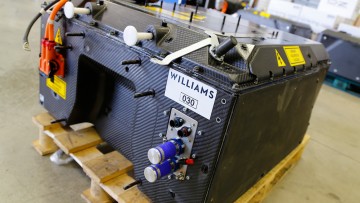 Sat above the batteries in the cars is the electric motor, developed by another hallowed name in motorsport – McLaren.

Ahead of its inaugural season, McLaren Electronics Systems agreed to become Formula E’s sole motor supplier, with the marque supplying the heart of every one of the 40 cars used on each race weekend. With McLaren firmly at the forefront of automotive technology, thanks to its motorsport commitments and production of the P1 hybrid-supercar, it was the natural choice for Formula E.

The motor itself, or Motor Generator Unit (MGU) as it’s officially titled, has its components taken directly from the £866,000 P1, including the rotating electromagnets at its centre. They help take drivers from zero to 60mph in an impressive three seconds. Blink and you miss it.

Woking-based McLaren’s route to Formula E started at a time when the P1 was in its infancy and Formula E was merely a glint in the eye.

“We started developing electric motors and controllers several years ago because we couldn’t find anything in the marketplace which was small enough and powerful enough for what we wanted to achieve in the McLaren P1.To put that into perspective, you’re getting around about 5kW/kg from this motor and that’s more than double the sort of power densities you see in most automotive electric motors,” says McLaren.

Formula E’s electric-only approach has greatly benefited McLaren with the development of their MGU, alongside the company’s hybrid-projects such as the P1.

“An electric racing car is quite different from a hybrid because the electric motor has to do everything and it reacts instantly to driver demands. So you have instant torque; you have instant braking. It’s the first time that we’ve been involved with a programme where you don’t have the luxury of an internal combustion engine to lean on,” the company says.

With the season nearly over, no one can deny McLaren their 100 per cent reliability record thus far, amid the continued development of their electric motors, for road and for race. It is no mean feat.