Return on investment in reality technologies can be protracted, such are the lengthy development times 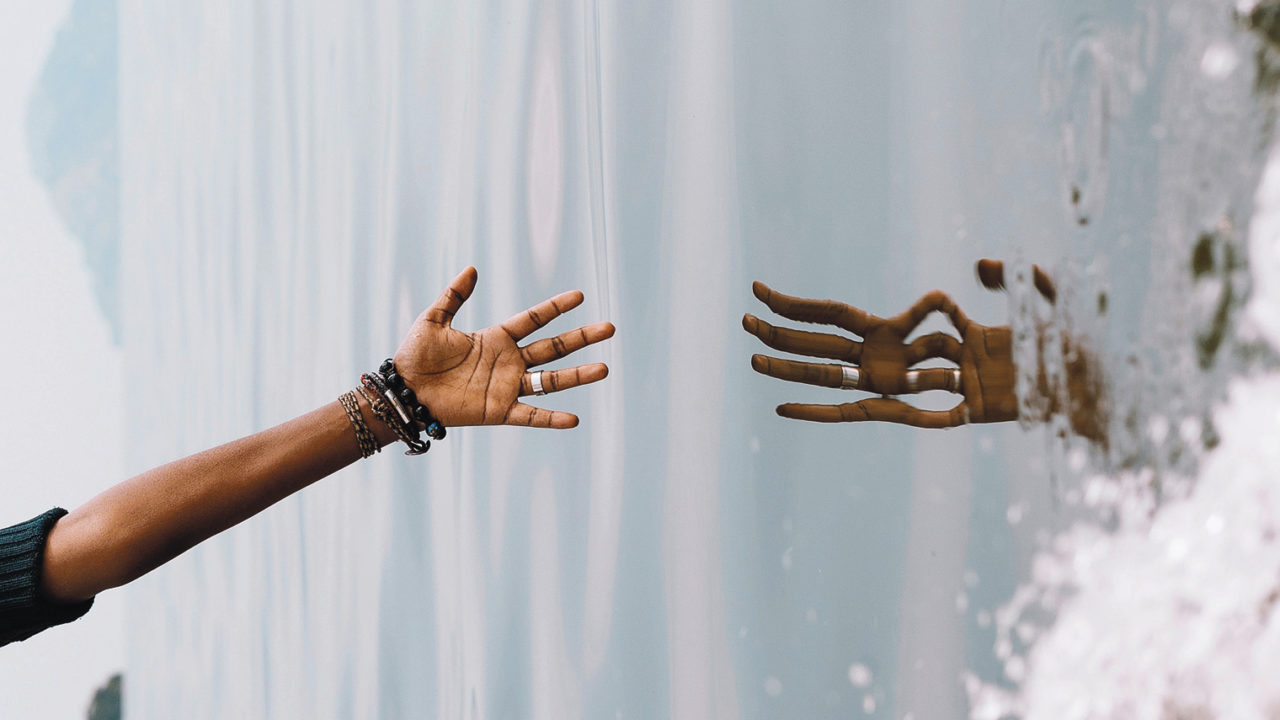 Nobody wants to sink money in a gimmick and there’s often a good case to be made for hanging back a little to watch how well a new technology works out for early adopters.

However, there comes a time when an innovation has proved its worth and it’s important to recognise when that point has been reached. Whether it’s Eastman Kodak’s failure to invest in digital photography or Blockbuster dismissing the idea of streaming video, corporate history is littered with examples of organisations that simply missed the boat.

It’s hardly surprising that many organisations have taken a sceptical view of XR (extended reality), seeing it perhaps as a consumer technology that has no real place in the commercial world.

However, this could be a big mistake. With investment pouring into the area from the likes of Microsoft, ODG and Meta, analysts see it as a booming technology that’s set for far more widespread adoption.

BIS Research predicts that the market for AR will rise from $3.48 billion in 2017 to a staggering $198.17 billion by 2025, a compound annual growth rate of 65.1 per cent. The technology can, it says in a recent report, be seen as just as ground-breaking as the development of personal computers back in 1981.

And in a survey earlier this year, technology industry association CompTIA found that three quarters of companies were aware of VR, with one in five already having a VR/AR initiative underway; just under a quarter are piloting the technology.

“One of the most startling things about the current landscape is that there are two extremes when it comes to understanding. We either get a client approaching us who knows exactly what they want, the context that it’s going to be used in and the potential benefits to their organisation. Or we get clients who really have no idea what they want, they just know they need to be looking at immersive technology for their future competitiveness.” 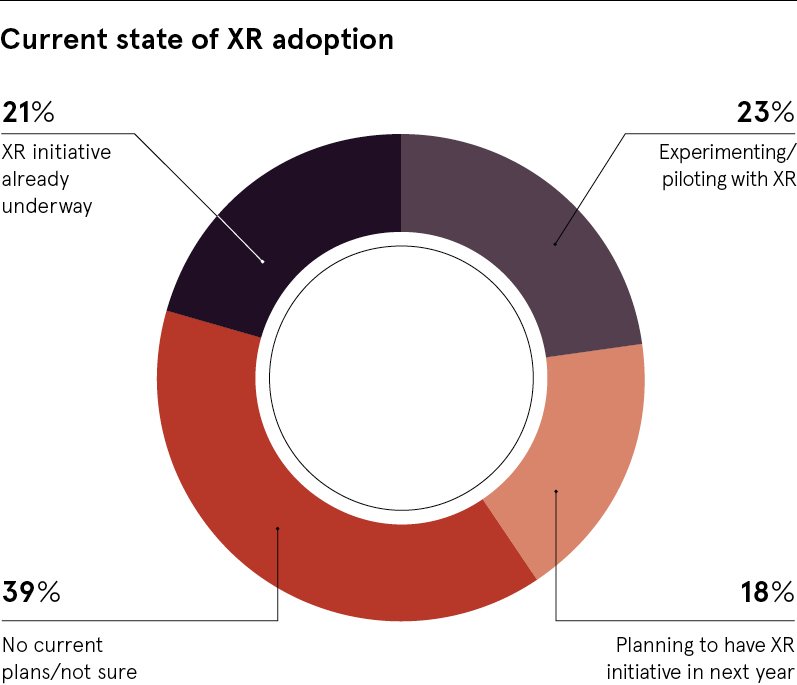 How is XR being used in business currently?

The most common current use of XR is in employee training, cited by 62 per cent in the CompTIA survey, with half of early adopters using XR in customer engagements. Other early uses include virtual meetings (47 per cent), research and development simulations (45 per cent) and on-the-job information, delivering information to an employee while they are engaged with a task (43 per cent).

“That doesn’t mean we’re not seeing new, novel or unusual briefs, but certainly we have started noticing certain consistent trends in the what, where and when of VR/AR,” he says.

“This means clients who fall outside those parameters tend to be more cautious, for the simple reason there isn’t the same body of proven success.”

Businesses must be realistic in their XR strategy

However, hanging back may mean missing out, as XR is not a technology that can be implemented overnight, and many organisations fail to understand the amount of time and money required. Generating content is comparable to producing a video game; it’s time consuming and requires highly skilled professionals.

“Clients have had a good ten years of getting a handle on average budgets for more traditional apps and web-based projects, but suddenly those assumptions go out of the window when you add an AR or VR element into the project,” says Mr Burrows.

“We’re only now getting to the point where clients are starting to understand the level of work which goes into producing these sorts of experiences and are planning these sorts of amounts into their budgets.”

This high cost applies even in the proof-of-concept (PoC) stage. “Firms should work with the supplier to scope the PoC so it fits their budget and objective,” says Jim Tramontana, senior product manager at Honeywell Process Solutions.

“Too often, companies try to validate the technology by testing the entire scope of the implementation. This results in firms finding the PoC itself too expensive and lengthy, meaning results are difficult to validate.” 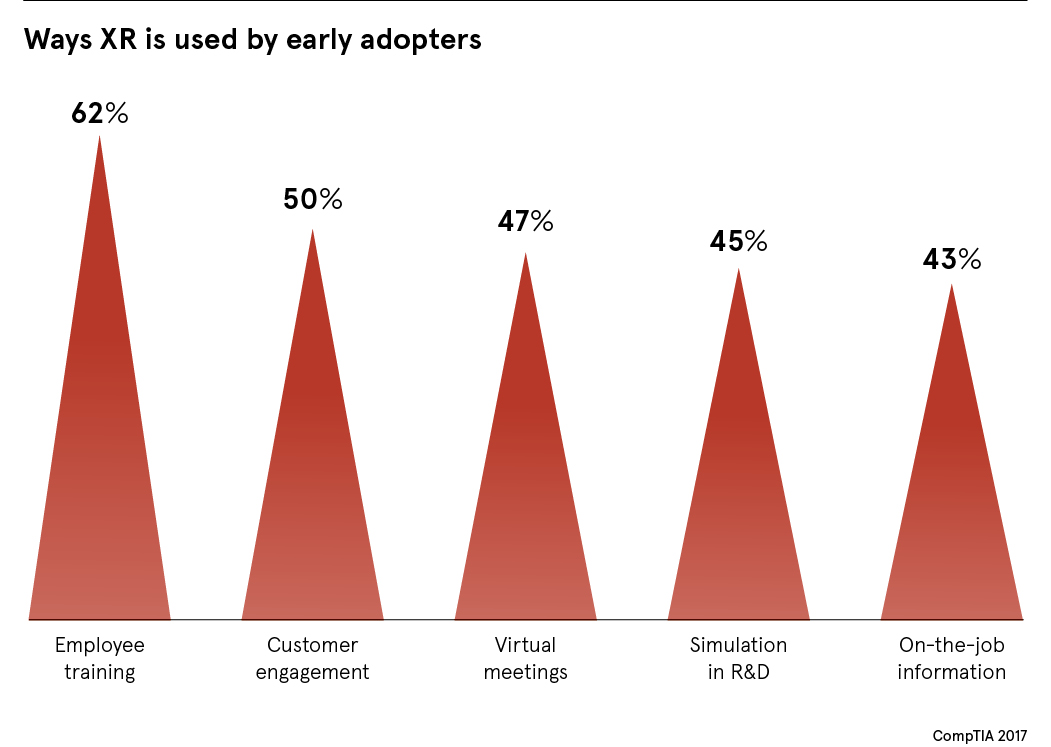 How embracing XR is boosting productivity

However, for those organisations that are prepared to take the risk and make the necessary investment, the rewards can be significant. According to a recent report from the Capgemini Research Institute, 82 per cent of companies currently implementing XR say the benefits are either meeting or exceeding their expectations.

“For businesses that are still reticent about immersive technology, we usually counter with the same argument, no matter what the industry. That is if they don’t start looking at this now, they’re dead in the water because one or more of their competitors will be,” says hedgehog lab’s Mr Allan.

“Simply put, if they don’t at least dip their toe and have a go, they’re going to be playing catch-up with their competitors soon enough.”