Smartphones used as mobile wallets to pay for purchases can also store virtual loyalty and rewards cards, either directly or via an app

It’s a common scene. The customer in front of you in the queue struggling to find their loyalty card to get it stamped or scanned. Or the vouchers in the hallway; at best rapidly approaching their expiry date, worse sitting there unopened.

Consumers worldwide lose $1 trillion a year in unclaimed loyalty rewards, according to card platform Loyalive. And there are £6 billion in unclaimed rewards just within the top ten programmes in the UK.

In theory, the digital wallet is a panacea with those brands transitioning to a mobile-first approach to loyalty reaping the rewards. From better data capture and growing revenue, to marketing and customer acquisition and retention, there are many benefits. But challenges loom as the relatively new technology finds its feet among consumers.

It was only in June last year that Apple launched Apple Wallet, an update on its Passbook tool. Recognising the potential in the loyalty space, this rebrand allowed loyalty and rewards cards to be added, alongside credit cards and debit cards.

In theory, the digital wallet is a panacea with those brands transitioning to a mobile-first approach to loyalty reaping the rewards

Later that summer Google launched Android Pay, a digital wallet platform to power in-app and tap-to-pay purchases on mobile devices. And so the mobile wallet was born, allowing smartphones to be used primarily to make payments for purchases digitally, without presenting a physical credit card, debit card or cash.

While they can store some loyalty cards, many organisations are busy building their own loyalty card apps to deepen relationships with customers. Nectar, for example, launched a new app last summer “as part of a decision at the start of 2015 to transition the programme into mobile-first”, according to managing director Will Shuckburgh. 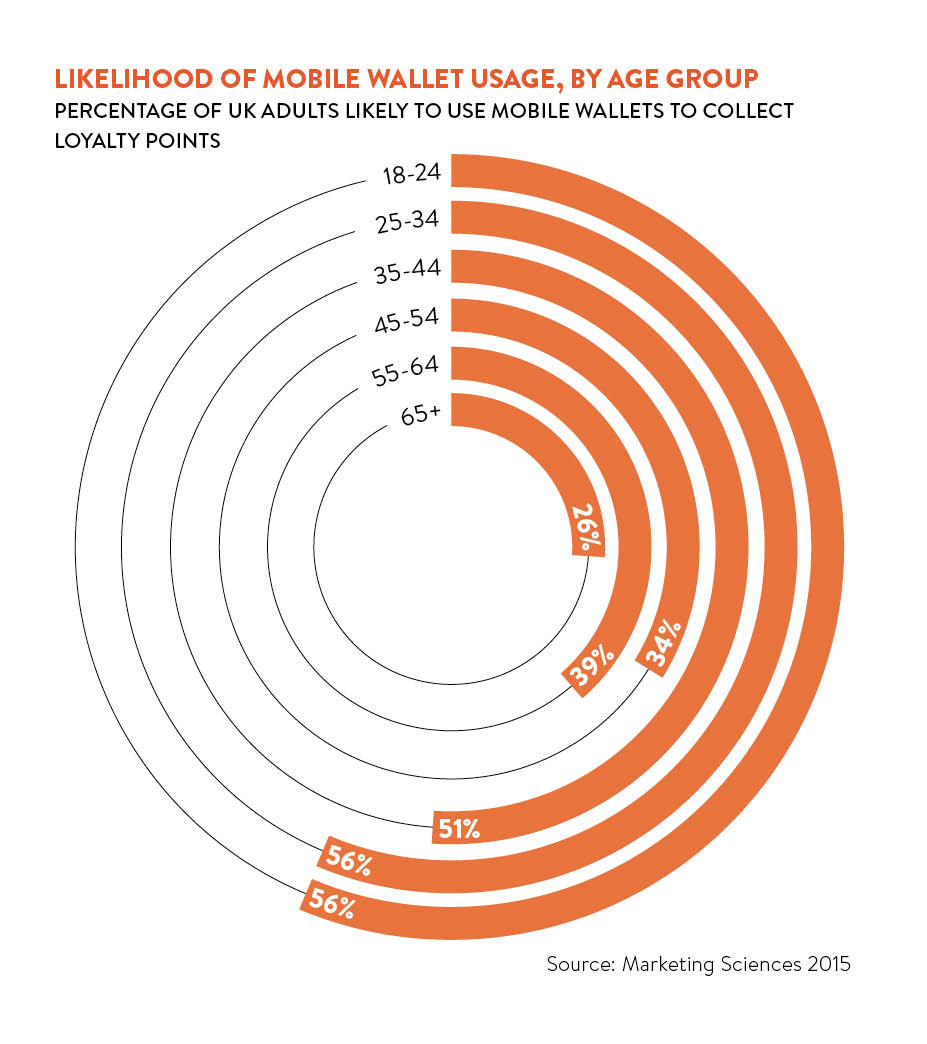 “Customers wanted to access great offers in their own time, for example during their commute or when walking into Sainsbury’s,” he says. “We had an app before, but it was about providing information and not centred around offers.”

The easier access to offers is paying off, with Nectar app users earning on average four times more points than their non-app using counterparts.

Brands are also able to gain a better picture of their customers’ buying behaviours and none more so than providers of the humble coffee, the unexpected poster child in the digital loyalty movement. The adoption rate is high, according to industry insiders, mainly because it is a common platform.

Starbucks was one of the first to jump into the mobile wallet space. It allows app users to order ahead, so they can pick up their drink and skip the queue. This solves a genuine problem, rather than offering technology for technology’s sake. Future developments in this field are likely to include apps automatically ordering your coffee once you approach the shop, for example detecting you are close to the outlet, the Americano is ordered and staff are again alerted as you enter.

Ease of acquiring new loyalty scheme members is also a positive side effect, says Mark Kanji, founder and chief executive of Loyalive, which helps businesses translate their loyalty and rewards schemes to mobile, via its aggregator platform. So far it works with 300 cards, which will rise to 380 in the coming months.

His company is poised to launch one-touch enrolment by the end of this year, taking advantage of the authenticity of signing in via a mobile phone. “We want to tackle that initial friction,” he says. “If you’re lucky, there’s an online tool [to sign up]. You have to fill in a form; they ask lots of questions. There’s friction there. Then you wait for the card to come. It arrives, but you don’t always open it and you may not always carry it around with you.”

At first glance, a loyalty card sitting within a mobile wallet or dedicated app seems a win-win situation. Brands grow sales and acquire new, and more loyal, customers while the customers save money and have a better experience. However, retailers face a range of challenges, both technical and cultural.

Trust and data security continue to be issues following a series of high-profile hacks hitting the headlines over the past few years. Some customers are loathe to embrace the mobile wallet concept, with Aimia Loyalty Lens research revealing 38 per cent of consumers in Europe cite concerns about data security as the reason why they are not likely to use a digital wallet.

However, Nectar’s Mr Shuckburgh says: “Mobile wallets is a fascinating space, but there are lots of players. We think we should have a space in wallet and all the major players are talking to us. We will test and learn.”

Point-of-sale (POS) technology also remains a sticking point, with varying degrees of sophistication across UK retail stores. For example, not all shops will have near-field communication (NFC) technology that can be used to enable transactions with phones and not all phones are NFC-enabled. Mr Shuckburgh agrees: “The challenge across retail is the investment in POS technology; it’s absolutely huge. How do you make sure it’s led by customer experience, not the technology available?”

The culture of using coupons and vouchers is another issue, according to industry insiders who say the scale of growth in the United States has been impressive because people use coupons there more than in the UK, where there is a stigma of using them.

However, digital vouchers rapidly deployed as part of campaigns are a growing trend, with savvy brands able to create a voucher based on a user’s location to a store.

Eagle Eye is a UK company that sits between retailer and brand, and its current customers include Tesco Clubcard, which sends out digital vouchers to its customer database, either pushed into the wallet or via e-mail or SMS, among other options. With Tesco, it claims it is able to reduce the voucher issuance time from five days to just two hours.

In fact, location is a current buzzword in the loyalty arena, with one startup basing its entire business model on this area. Wallet Circle allows brands to reach out to customers who are within a 100-metre radius of their store, using Apple’s iBeacon technology.

“We saw that physical stores struggled to use [beacon technology] efficiently,” says co-founder Manas Abichandani. “Solutions seemed to focus on providing benefits to businesses, but no one had realised that for iBeacons to work, end-users needed to be on board, engaged and sufficiently motivated to download an app for example.

“Digital loyalty is a new way of using iBeacons that not only has benefits for business, but also addresses the customer painpoints of needing to remember loyalty cards or having a wallet bulging full of them.

“It’s easy for a company to turn its paper loyalty card mobile; businesses just need to supply their logo, offer, address and preferred images. No APIs [application programming interfaces] or technical knowledge is required. The iBeacon acts like an old-fashioned ink stamp, but without the mess and a lot quicker.”

For Loyalive, location-based notifications will be ready by the end of the summer. “A lot of users ask us to remind them when they’re near a store. In the UK, we’re geo-fencing every store,” Mr Kanji adds.

From Nectar’s point of view, Mr Shuckburgh says he is looking at geo-location, but warns there is a fine line between usefulness and intrusiveness. “We’re trying to figure out the right way from the customer’s expectation,” he says. “They can find some location stuff pretty intrusive. We’re doing a lot of training with groups of customers.”

With the rapid pace of advancement, loyalty cards, whether as an app or inside a mobile wallet, look set to play an increasingly important role in the customer experience. Configured correctly, the technology opens up new channels and deepens relationships for brands that no doubt prefer to have customers in their pocket, rather than out of pocket, when they’re standing in the queue. 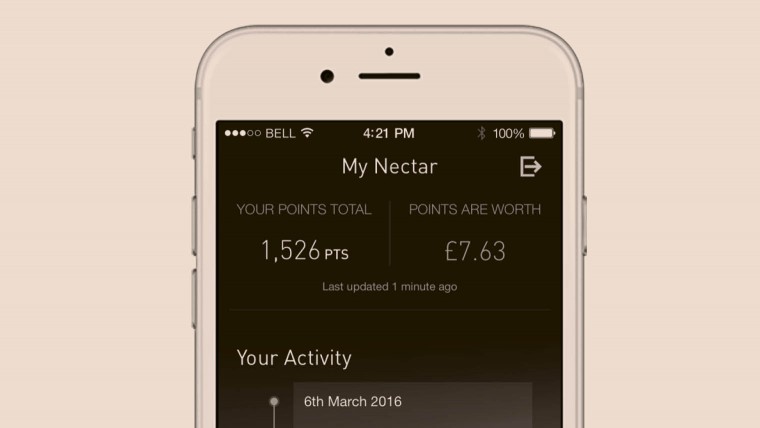 Nectar is one of the most recognisable loyalty card schemes. Its app relaunched last summer and now publishes 100 to 150 personalised offers a week. This compares with ten to fifteen vouchers printed and sent out by post three times a year.

According to research from Aimia Loyalty Lens (Aimia is Nectar’s parent company), 65 per cent of UK consumers are most likely to use mobile wallets to store coupons and vouchers, 63 per cent to store loyalty cards and 56 per cent to make cashless payments. A Nectar app on a mobile device, therefore, makes perfect sense.

Nectar has some 19 million members in the UK and managing director Will Shuckburgh reports that to date millions of people have downloaded its app. “We’re not there yet, but we’re getting good scale,” he says. “[App users] will have a higher knowledge of the programme and are more likely to redeem in considered ways.”

Nectar has also doubled the dwell time this year on mobiles and Mr Shuckburgh notes there is usually a good take-up of hero offers by mobile users. “We had one example where users could buy a coffee for 50 points. Even in the app world, the volumes were spectacular,” he says.

Other research from Aimia Loyalty Lens reveals that consumer appetite for digital wallets is growing in Europe, with 31 per cent of Europeans stating they are likely to use a digital wallet on their mobile device, which is a 5 per cent increase on the previous year.

“As a channel, marketing has changed,” Mr Shuckburgh concludes. “There has been a shift in power between brands and customers. Customers are incredibly savvy, but also want long-term relationships with brands. You have to market in a different way. Not all brands have caught up with the fact that the customer is king.”