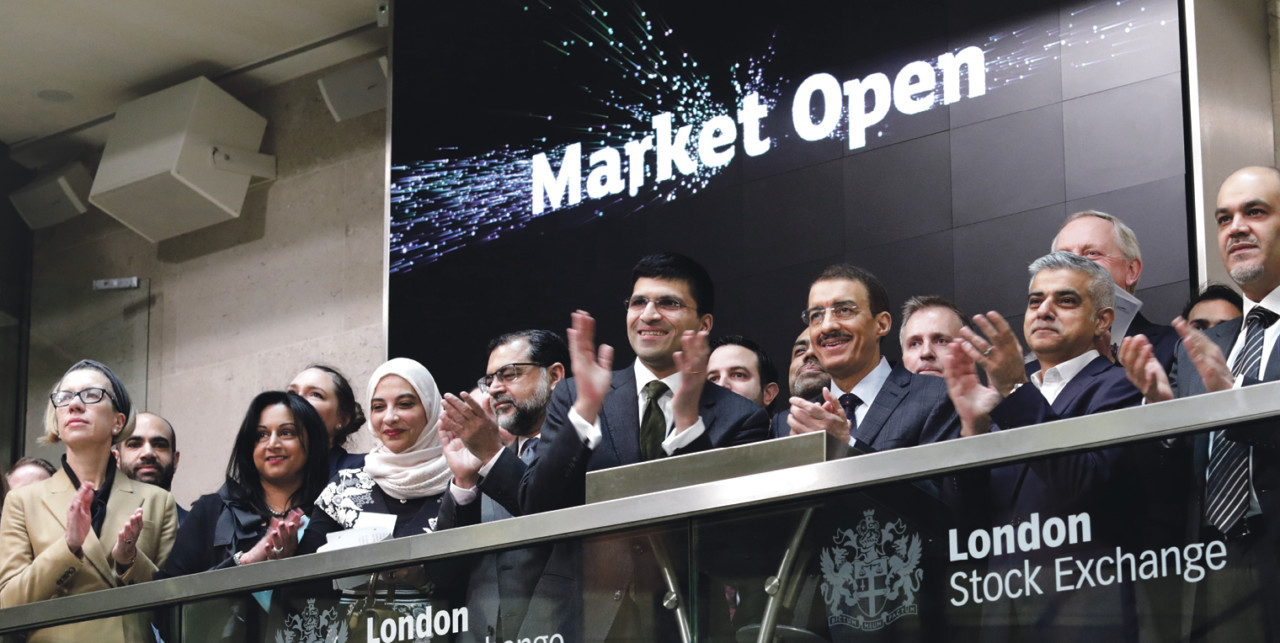 The Islamic Development Bank (IsDB) was founded 44 years ago as a development finance institution to foster economic growth, financial inclusion and social progress in the global Muslim community in accordance with the principles of Sharia, or

The Islamic Development Bank (IsDB) was founded 44 years ago as a development finance institution to foster economic growth, financial inclusion and social progress in the global Muslim community in accordance with the principles of Sharia, or Islamic Law. The IsDB has 57 member states and touches the lives of one in five of the world’s population. With annual operations exceeding £7 billion a year and subscribed capital of £24 billion, the IsDB is the leading development bank for the Muslim community. 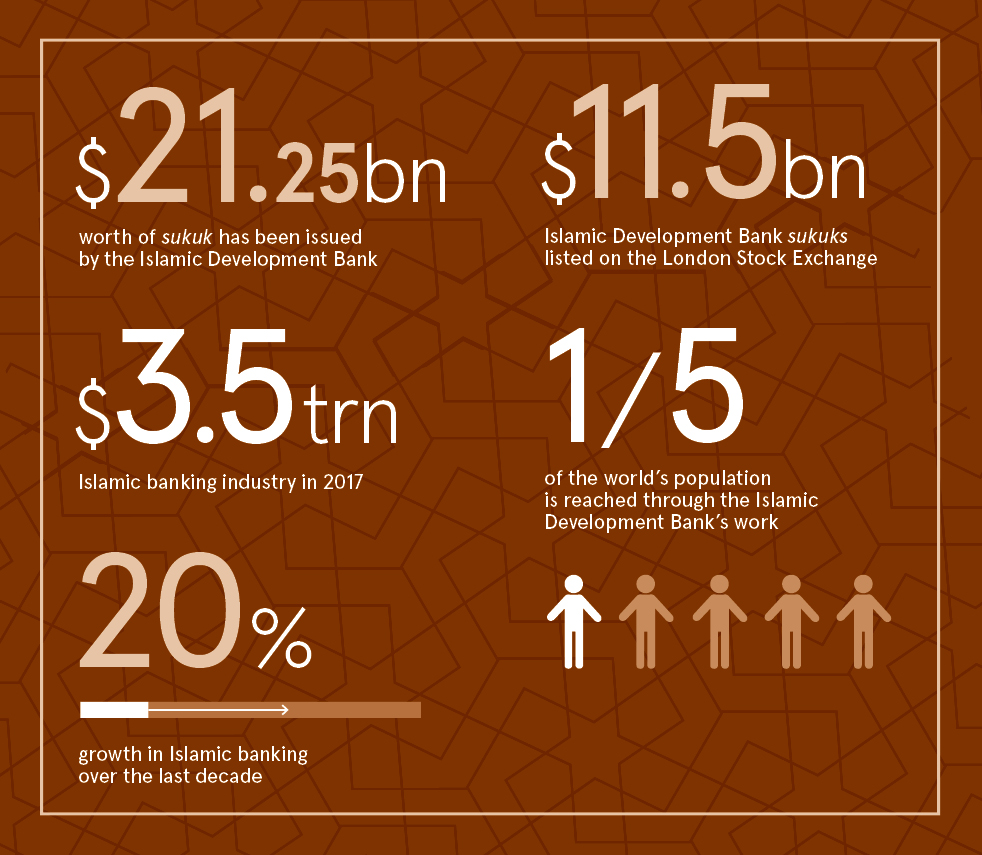 Underpinning the operations of the bank is the sukuk or Islamic bond market, which the IsDB has actively used, developed and promoted to raise capital for its programmes in financial inclusion, infrastructure investment, financial services support, education and health – and the London Stock Exchange (LSE) is central to the bank’s sukuk programme.

At a sukuk conference in London earlier this month – the Sukuk Summit – the IsDB’s president, His Excellency Dr Bandar M.H. Hajjar, set out the role the UK plays in support of the IsDB’s operations globally. He said: “The UK has demonstrated great leadership as the first non-Muslim country to issue sukuk back in 2014… the potential for the growth of Islamic finance is clear. Both the UK government and IsDB are actively promoting this objective, and London’s emerging role as a hub for Islamic finance is underpinned by a wide skill base, institutional flexibility and historical links with Muslim countries.”

The IsDB has listed 11 securities on the LSE, including five sukuk, which have raised £4.1 billion, and has just renewed its notes programme that will allow the bank to tap up to $25 billion (£18 billion) of sukuk issuance through the London market.

A major focus of Dr Hajjar’s vision for the bank is to help drive the development of Islamic finance globally and reach into new areas that require greater development. He said: “Islamic finance has long been seen as specialist or niche in Western economies, but this is changing… I want Islamic finance to be seen not as niche, but instead as a vehicle for ethical investment, promoting long-term sustainability, development capital and investment for Muslims and non-Muslims alike.”

He believes that Islamic finance can provide an example for a sustainable global financial system that the conventional system can learn from and maybe help to avoid future global financial crises such as the 2008 crash. He suggests that the conventional system needs to adopt a new banking and finance paradigm based upon universal justice, risk-sharing, a direct involvement with the real economy and the avoidance of excessive speculation – the key principles of Islamic finance.

To carry out its development remit, the IsDB extends Sharia-compliant loans to its member countries for the financing of infrastructural and agricultural projects such as roads, canals, dams, schools, hospitals, housing and rural development, both in the public and private sectors.

The investments, in which IsDB is often the sole lender or keystone financier, are designed to have an impact on the economic and social development of the member countries concerned, and are accorded priority by the respective governments. Such loans, in conformity with Sharia, are interest free and the bank recovers its administrative expenses by levying a service fee.

In 2015 and 2016, the IsDB backed a structural infrastructure programme in Turkey, supporting the financing of four renewable energy development projects and six energy-efficiency projects, which helped the country reduce its reliance on fossil fuels, diversify its sources of power generation, diminish its carbon footprint and connect remote rural areas to the power grid. In doing so, the IsDB created jobs, reduced the need to import natural gas from Russia, Iran and Azerbaijan, which was a significant draw on the country’s foreign exchange reserves, and helped boost Turkey’s industrial output.

The project helped Turkey bring 370 megawatts of electricity from renewable energy sources into its grid and reduced the country’s greenhouse gas emissions by more than one million tonnes.

The IsDB worked in partnership with a local partner, the Industrial Development Bank of Turkey (IDBT), providing $100 million on a total project cost of $640 million. This facility enabled the IDBT to leverage investment from other development finance institutions and commercial banks. These were the World Bank, International Finance Corporation, European Investment Bank, German development bank, KfW, and a consortium of local Turkish banks.

I truly believe that sukuk can change the world for the better, not only for investors, but for the billions of people who can benefit from the growth it drives

Dr Hajjar believes that Islamic finance and the IsDB have a key role to play in developing a sustainable global economy by, for example, supporting the rollout of renewable energy projects in developing countries in partnership with other development finance institutions and impact investors. He said: “We know consumers are looking for investments with ethical returns as well as financial returns. The Islamic finance sector has broken records of promoting financial, social and economic impact investing, as well as financial inclusion and shared prosperity.”

The IsDB has announced a funding plan of $2.5 billion for the first half of 2018, the largest since its inception in 1974 and, to support this, the bank recently launched a new $1.25bn sukuk under its $25-billion Trust Certificate Issuance Programme. The IsDB also recently launched the $500-million Transform Fund to provide seed money to innovative startups and smaller businesses, helping them implement development projects related to the UN’s sustainable development goals, especially in the areas of healthcare, education and fintech.

Key to the IsDB’s investment programme is the sukuk market and, with $11.5 billion of its own sukuk listed on the LSE, London is central to the bank’s development goals. Although Dr Hajjar concedes that the sukuk market is grappling with its own challenges, including liquidity issues, limited active trading, a lack of standardisation across domiciles and the tendency for Islamic finance investors to buy to hold when investing in sukuk, he still sees sukuk as a vehicle through which it and the global Islamic finance community can mobilise capital for key infrastructural investments in developing and developed nations.

He said: “I truly believe that sukuk can change the world for the better, not only for investors, but for the billions of people who can benefit from the growth it drives. I want the Islamic Development Bank to be at the heart of this movement and I see the UK having a key role in the market as it grows.”