For too long big data has been viewed as the preserve of large corporations. But research from Dell suggests that 96 per cent of small and mid-sized businesses now have a defined big data agenda.

In fact, big data could be the cheapest way to tackle the big guys, says Bertie Stephens. “When e-tail giants are pouring billions into fulfilment networks, logistics and technology, there’s no logic in trying to win on their turf. Big data is the future of e-commerce because it’s one of the few playing fields where small merchants can thrive in a world dominated by multi-billion companies such as Amazon and Alibaba.”

Mr Stephens is founder and chief executive of Flubit.com, an online marketplace which generates competitive offers based on interest in a designated product, essentially diverting customers away from Amazon back to small, independent retailers.

But a lot of people misunderstand big data, he says: “There is so much more data being recorded than ever before. Before, someone would walk into your store and you’d track 100 people glancing to the left and you’d use that data to put things to the left. It’s about taking the offline idea and applying it to online.” 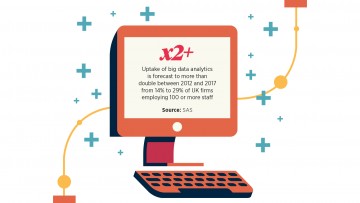 Flubit employs six data analysts to crunch the numbers, but a lot of SMEs aren’t in that position. The key, Mr Stephens says, is to “be the customer” and break the data into chunks. “Much of this can be got from Google Analytics if you know what you’re looking for,” he says. “There are many tools out there, but it’s how you use the data that’s important.”

He is adamant that using data doesn’t mean stepping up the snooping. “If you come to our site, all you can do is ask for a product. We use the data available about the market to tailor the service for the user at that moment. It’s not about getting intrusive with the data; it’s about understanding how the market is reacting,” he says.

The data Flubit analyses then goes back to its SME clients and makes life easier for them. “They, in turn, are able to sell more to us,” says Mr Stephens.

Beringer Tame is a Basingstoke-based niche digital recruiter, specialising in finding candidates for positions in e-commerce and recruitment across Europe. As the positions Beringer Tame hires for are not incumbent, they require complex algorithms in order to find the right candidate. But the data this brings up is people-focused, which needs to be processed by recruiters. By developing more precise, or more experimental algorithms, the company is able to achieve new results.

Chief executive Patrick Tame says: “It’s become impossible to avoid the personal and professional profiles of candidates. Almost everyone uses a CV-uploading service or business and social networks, creating a huge volume of data. Beringer Tame, which employs two research analysts, has used these techniques for ten years and we have collected a large amount of historical data, which is unusual for a small business.”

It’s also important to recognise that big data can only get you so far, Mr Tame says, at least in certain industries. “Headhunting is all about human relationships, and our core business is processing human and emotional data, which always eludes large search engines. Despite our strong history in research and analytics, our heritage lies in a network of talent across the sector,” he says.

Online and cloud-based platforms, such as Google Analytics, Kaggle, Swipley and Tableau, mean SMEs can access data insights without making huge capital investments. Mr Tame says: “As a niche recruiter, it’s important that we use data sets and pointed algorithms, but we don’t necessarily need armies of resources and we prove that by being commercially viable.” It can be a challenge for a small business to stay on top of huge reams of information so, says Mr Tame: “It is key that the data algorithms produce is used smartly and pointedly.”

Lucky Voice, the UK provider of interactive karaoke services, has adopted a data-driven approach to boost its business. The company uses Tableau’s analytics tools to find answers to everyday questions in real time. As a result, says managing director Nick Thistleton, the company has been able to grow its revenues, redeploying hard-pressed development resources away from reporting into creating new karaoke services and maximising revenue per customer.

Mr Thistleton says: “Adopting data visualisation software has also helped change the culture, enabling everyone within the company to be more aware of business performance.”

Elsewhere meal delivery company Hello Fresh might be all about old-school values of cooking from scratch and eating as a family, but it’s all done with the most up-to-date technology. Hello Fresh uses data to drive decision-making in all parts of the company, from developing recipes to scoring suppliers or measuring employee engagement.

“In particular, we go to extreme lengths to contextualise all parts of our customers’ experience in data. As an online weekly delivery service, it is then possible for us quickly to isolate the impact of almost all new customer-facing initiatives,” says chief executive Ed Boyes. This, he says, has led to a culture of continuous improvement, “where we are never satisfied with the status quo”.

Mr Boyes adds: “Being data-driven is a core tenet of our culture. For many coming into the business, even the word ‘data’ can be intimidating so we coach staff to understand that data is the tool by which we can rapidly generate and measure improvement, which ultimately leads to happier customers. This has resulted in a more democratic decision-making environment, where anyone in the team’s suggestion or opinion has equal merit when rooted in data.”

Hello Fresh co-founder Patrick Drake agrees. “Running a company without collecting and analysing data is tantamount to driving with your eyes shut. Subtle variations in an advertising campaign – do we use a photograph of our recipe box or a photograph of a couple enjoying their dinner? – can make a tangible difference to the success of a campaign,” he says.

For the small business it’s about not losing sight – ignore big data at your peril, but by no means expect it to be panacea

“Our recipes can be the difference between retaining and losing a new customer. Collecting and analysing data means we can test ingredients, error rates and even the colour of the buttons on our website to improve our product constantly. Though ‘data analysis’ doesn’t exactly sound sexy, it’s the driver behind our greatest innovations.”

Nonetheless, allowing data to define an SME is dangerous, says Mr Tame. “Fundamentally, data is not as powerful, nor as effective, as intuition or common sense. While high-tech approaches undoubtedly add value to the business, they can be a bit of a rabbit hole and an expensive rabbit hole at that,” he says.

In the recruitment industry at least, Mr Tame says: “Data can be extraordinarily misleading and for this reason it will never replace the traditional role of the headhunter. This is partly because they have no control of the data source. Large companies pay huge sums of money to dig up data that confirms their own business model.”

Big data is very subjective, he says, concluding: “What one person calls it, doesn’t cut it with another. For the small business it’s about not losing sight – ignore big data at your peril, but by no means expect it to be panacea.”