In 2014, the world’s ten busiest airports moved more than half a billion people. For the first time the airport with the highest number of international passengers was Dubai International with 70 million passengers. It pushed London Heathrow into second place on 68 million, while Hong Kong came third with just under 62 million passengers.

Lump in the next ten busiest airports as defined by international passenger numbers and altogether the top 20 moved in excess of 700 million people internationally, representing more than one in every ten humans on the planet. Over the 12-month period, half of these airports saw passenger numbers rise by more than 5 per cent and three – Bangkok, Istanbul and Taiwan – experienced double-digit growth, according to Airports Council International.

What most of these airports have in common is they are hubs, offering a high number of routes and moving people internationally rather than necessarily being the final destination. Probably the world’s most notable hub, Dubai International (DXB), experienced a 6.1 per cent growth in passengers in 2014, raising its international passenger manifest to around 33 times its national population. Last year DXB’s retail turnover was a staggering $1.9 billion.

Dubai also recently opened Al Maktoum International, which will have five runways and capacity for 160 million passengers a year when it is completed. By 2020 it’s estimated that aviation will contribute $53 billion to the emirate’s economy, representing 37.5 per cent of GDP and support 750,000 jobs.

According to John Kasarda, director of the Center for Air Commerce at the University of North Carolina’s Kenan-Flagler Business School, Dubai has become the de facto hub for anyone in India or Africa, as well a leading stopping point for those travelling between Europe and Asia. In his words, Dubai is a “global aviation hub with a city-state attached”.

It’s also indicative of a trend that’s changing the world, from the way people do business to macro-urban planning. “Hubs are the routers of the modern physical internet that connects people and products quickly and efficiency around the world,” says Professor Kasarda, for whom hubs have become part the strategic business infrastructure that will be even more important in the 21st century.

And business agrees that air matters. A 2013 study found that half of Fortune 500 companies were headquartered within ten miles of a hub airport. That compares with just 29 per cent for all businesses in the United States. Closer to home, Dutch banks ABN Amro and ING have put themselves close to Amsterdam’s Schiphol Airport, just six minutes away in fact. And in Heathrow, which is seeing rising competition from Amsterdam (Heathrow’s unofficial third runway, apparently) and Paris Charles de Gaulle, Professor Kasarda says that the Sofitel Hotel, directly accessible to Terminal 5, has become a business hub in its own right.

Elsewhere, there’s the example of Zhengzhou International Airport in China, where Taiwanese technology giant Foxconn has built a manufacturing base within a bonded zone at the airport, employing 240,000 people assembling Apple products. Raw materials fly in, products fly out.

“What they’re doing in China is very big,” says Professor Kasarda, co-author of Aerotropolis: The Way We’ll Live Next. “It’s targeted on high-value manufacturing and advanced business services. They’re going about it very systematically and they’re doing it so well.”

He predicts Zhengzhou will become a full-blown “aerotropolis”, built over the 160-square-mile Zhengzhou Airport Economic Zone, with the airport at its centre. Professor Kasarda foresees the rise of the aerotropolis as the fifth wave of transport-based human economic expansion, following the development of port, rail and car-based economies. Crucially, it means that instead of having airports at the margins of our living space, cities of tomorrow will have airports at their heart.

Wherever the airports are they’ll need aircraft. Airbus predicts that the world will want 31,258 new passenger and freighter planes worth nearly $4.6 trillion by 2033, which is about 1,700 aircraft a year. That’s a lot of aluminium and carbon fibre, not to mention, engines, avionics, seats, life-vests – you name it.

For David Bentley, a UK-based analyst from the Centre for Aviation, while the Airbus figures speak for themselves, hubs will be in the driving seat for the next five years.

“The growth in the market is coming principally out of the major hubs,” he says. “They’re seeing spectacular levels of growth, in some places well into double figures in both passenger numbers and freight. Hubs provide a huge opportunity for companies involved in aircraft manufacture, hotels and retail. The amount of work that’s going into the retail at some airports, such as the new Istanbul airport, is phenomenal. They’re re-evaluating the way people buy things. I can imagine supply industries growing up around hub airports, perhaps in a way we haven’t seen before.”

And therein lies the broader business benefits of hubs. “Hub airports are critical for competitive strategy,” says Professor Kasarda. “They’re not just city or regional assets, they’re national assets.” Citing the examples of Singapore or Hong Kong, he cautions that business is now the survival of the fastest. “It is no longer the big eating the small, but the fast eating the slow,” he says.

That’s why business needs to speak up, to ensure that hubs such as Heathrow are allowed to grow. “Business has an obligation to emphasise to government leadership how absolutely critical hub airports are to their competitiveness and prosperity,” Professor Kasarda concludes. “Time is not only money, time is currency. Businesses need to be connected. Hubs provide that connectivity to maximise that currency.” 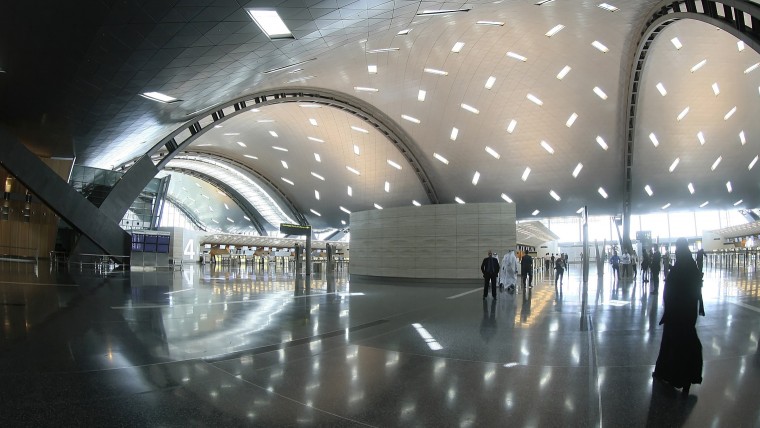 Boasting two runways longer than Heathrow’s – one of them 900 metres longer – and with capacity planned for 50 million passengers a year, Doha’s new Hamad International Airport (HIA) is not about to run out of space.

After all the Qatari capital’s population is just 800,000, so even if they all decided to jet off at once, the queues at HIA’s 137 extra-wide check-in desks would almost be manageable. Don’t forget also that the new 600,000-square-metre terminal, with its Arabian Sea wave-inspired design, is Doha’s largest building.

Pretty obviously, ambitious Qatar, already known for its Al Jazeera media network and its winning bid to host the Fifa football World Cup in 2022, has other things in mind. Namely, the gas-rich state wants to ape the success of nearby Dubai to become a major worldwide hub for air transport.

And HIA, which opened in May, is their boarding pass. Aligned with Qatar’s national flag carrier now based there, it bills itself as the “five-star gateway to Qatar and on to the rest of the world”, and boasts being eight hours’ flight from two thirds of the world’s population.

Destination architecture includes a 90-metre-high crescent-shaped air traffic control tower, plus there’s a 200-room luxury airside hotel and 25,000 square metres of shopping. While the seafront HIA complex as a whole spans 11 square miles – about one third the size of the city of Doha – it’s only getting bigger, with plans to surround it with an airport city free trade zone covering a further four square miles.

With a vaunting vision to redefine what we understand by the word “airport”, the owner of the Malaysian capital’s principal hub Kuala Lumpur International Airport (KLIA) and its recently opened sister low-cost hub KLIA2, is working on a plan that reads like an improbable 1970s sci-fi novel.

During the next decade, it is building a full-blown airport city called KLIA Aeropolis over ten square miles of land, which it has already earmarked around the existing airports.

When it’s completed, KLIA Aeropolis will offer seven zones optimised for activities you would expect, such as logistics and cargo, as well as business, but also services such as medical tourism, agro-tourism and theme parks – yes, plural. There will also be a university, a golf resort and a free zone for shopping. In addition, it will encompass the Sepang F1 circuit, host of the Malaysian Grand Prix. “Move your business to KLIA Aeropolis for success, prosperity and progress,” entreats its owner.

And work has begun: in the coming months the first massive 25,000-square-metre phase of an outlet retail park, the biggest in South-East Asia, will open just four miles from the airport, with a shuttle bus operating between the two, all part of the master plan.

In the developer’s own words, KLIA Aeropolis aims to become “a truly remarkable new airport city development with top-class tourism attractions – to become a destination in its own right”. Already the world’s 20th busiest airport in terms of passenger numbers, with 47 million passing through its scanners in 2013, for KLIA and KLIA2 the sky, it seems, is the limit.