Losing staff is a costly business, but there are ways of winning loyalty through engaging employees who then give their best

If there’s one thing employers fear most about an improving economy it’s the very real spectre of employees recognising this too and deciding to up-sticks and look for pastures new.

According to the Bank of England, wages grew by just under 2 per cent in 2015 and recent research by CV Library, the UK’s largest online jobsite, revealed what many bosses have already felt that thanks to a surge of new vacancies – up 15.8 per cent compared to the same time a year ago – staff are looking to quit in growing numbers.

Employees are downloading around 220 applications every second, says CV Library, and it predicts seven million will be actively seeking new job opportunities this year.

A lack of engagement

According to workplace experts, the driver for employees thinking the grass is greener can be explained by one word – engagement or rather the lack of it staff feel towards their companies.

Engagement is often described as people’s willingness to go the extra mile, but just 16 per cent of UK employees say they are willing to put in extra effort at work, the lowest it’s been for four years, according to CEB’s December 2015 Global Talent Monitor. Employees feel demotivated, with the psychological contract between employer and employee hitting new lows.

Boosting engagement has been the Holy Grail for some time, but human resources experts will also be the first to admit it’s an elusive thing to pin down. So much so that some now actively dislike the word entirely. “So-called motivational away-days, chocolates left on desks – it’s all branded under the banner of staff engagement and motivation,” says Mike Greatwood, former HR director at Computacenter, now chief executive of the Dream Manager Programme. “The problem is staff see these as unauthentic behaviours that are in the organisations’ interest, not the employees’.”

So convinced was he that there must be something better that he flew to America after reading New York Times bestselling author Matthew Kelly’s Dream Manager book and is now launching the book’s methodology in the UK under the Dream Manager Programme banner. 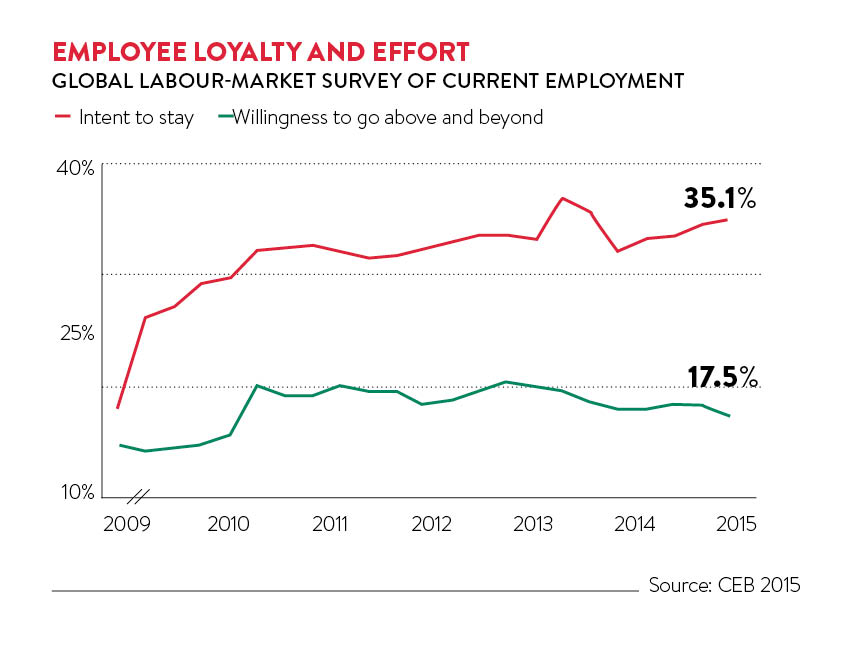 “The basic philosophy is that true motivation and engagement is created when firms put their people – not the company – first,” he says. “Employers need to give staff the tools to be better versions of themselves and, crucially, this doesn’t just have to be in their professional development; it can be in their personal lives too.

“Firms using the methodology – and several FTSE clients already are – help staff rediscover their dreams and then help them achieve the dreams. It’s proven that those who feel more positive about their future are 50 per cent more likely to be happier with their ‘now’. This is the motivation employers need to tap into.”

Bosses might baulk at involving themselves with their employees’ “outside” lives, but more and more the notion is catching on that motivation and engagement is as much about how people can manage themselves outside, as much as inside, work.

“Three months ago we invested £100,000 building a free on-site, 24-hour gym,” says Charlie Mullins, boss of Pimlico Plumbers. “I think it’s been the biggest boost to staff engagement for years. It’s not something to try and get staff to work harder, it’s just for them. As a result we know it’s valued.

“Staff come in on their days off just because they want to work out and people say they’ve cancelled their existing gym membership, so they also have more money in their back pockets too.”

By having this staff-matter-first approach, Mr Mullins says additional perks, such as monthly best employee awards, rewarded with a £200 Langham Hotel voucher, can be the icing on the cake, rather than the be-all and end-all. Plumbing is one of the most highly sought-after trades, but Mr Mullins says he no longer worries about retention and argues that the beauty of this approach is firms can do whatever works best for them.

For some firms it’s providing financial education to staff. According to research by the Social Market Foundation, one in eight workers worry so much about their finances, it stops them concentrating at work, while for others, it’s helping their physical wellbeing.

At Danone UK, for example, in 2013 the company decided to put health at the centre of how it could help create an environment where staff felt valued, to bring its external “health through food” brand internally to staff. Part of this has included paying for an annual health MOT.

“The checks are wide-ranging and include areas that aren’t covered as standard by the NHS,” explains John Mayor, Danone’s head of UK rewards. “They include atrial fibrillation or AF and peripheral artery disease screening, which we feel is especially important as an estimated 20 per cent of AF cases go undiagnosed.”

Little can be more engaging for staff than their employer uncovering potential health problems early, and already Danone has identified workers with potential coeliac disease and diabetes. A surprise finding was vitamin D deficiencies in staff, so vitamin D sprays and supplements are available to all, and a walking club has been set up.

For those who feel motivation still comes from giving professional development too, at cinema chain ODEON & UCI, having a holistic approach is how Kathryn Pritchard sees the perfect relationship being struck.

“We feel work is a partnership – about setting out a two-way relationship,” she says of the new initiative ODEON has developed that recognises seven phases in an employees’ career. “We know we won’t hold on to everyone, but it doesn’t change the fact we want to give people skills for life, such as confidence to our younger staff. All managers are training in giving ‘be better’ feedback, so staff are encouraged to do more of what they’re brilliant at.

“In return, we’ve set out clear career paths for those who want that and provide flexible working to help people manage their outside lives. The more people feel good about themselves, the more they feel good about work. When everyone is clear about expectations from both sides, and our values are lived by executives, people’s best self follows. We don’t say to staff ‘you fit into our world’; we make work a partnership and by doing so feel we create a sweet spot where everyone is happy.”