Despite the challenges facing mid-market companies expanding abroad, the time is right to export, as Rob Langston discovers

Since the onset of the financial crisis, the Coalition Government has made export growth a priority in helping the UK recover from one of the worst economic disasters to hit the economy in living memory.

Companies of all sizes have been encouraged to play their part in driving British exports, but attention has also been placed on the mid-sized company sector and how it can contribute. In April, Chancellor George Osborne pledged to invest £4 million to help triple the number of mid-sized company business advisers.

Although financing may have been hard to come by in recent years, banks and government initiatives, such as UK Export Finance, are making greater efforts to target mid-sized businesses.

“Mid-market companies, with turnover of between £10 million and £200 million, are the sweet spot of British business – the growth engine,” says James Stirling partner for growth and acquisition finance at Investec. “This is because businesses in that sector tend to have established themselves and have ambitions to grow. They tend to have talented management teams and entrepreneurial shareholders.”

Indeed, appetite among the UK’s estimated 8,900 mid-sized businesses for expansion abroad is also thought to be strong, with many anticipating growth in sales overseas. A survey of British mid-sized businesses by GE Capital in June found an expected export sales increase of 7.6 per cent during the next 12 months, a higher rate than peers in France, Germany and Italy.

“They teach you in business school to ‘think globally, act locally’,” says Dan Turner, chief operating officer of Oxfordshire-based ByBox. “It’s an oldie, but something which companies looking to expand and grow overseas have to keep front of mind.” 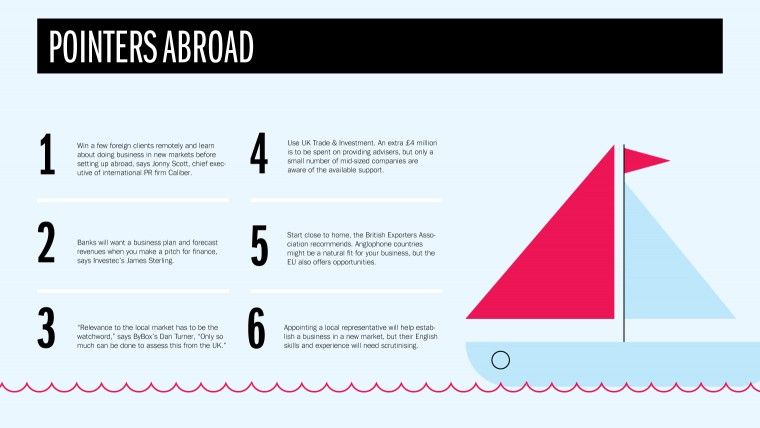 ByBox has worked with local partners to bring its dropboxes to Europe, the United States and further afield, and has even begun manufacturing locally to limit risks and exposure.

Working locally is a practice that others have followed to gain a foothold in new markets and one that has proved successful.

“Before opening our Dubai office, we understood the big challenges associated with expansion, such as ensuring our service appealed to a new target audience and the more prosaic ones such as communicating between different time zones,” says Jonny Scott, chief executive of Edinburgh-based public relations company Caliber. “These learnings helped us avoid the obvious pitfalls and get the new branch off the ground without any major hiccups.”

One of the biggest drivers of growth for businesses during the past 20 years has been the internet and the rise of e-commerce, providing opportunities for all types of businesses. For brands looking to move abroad, the internet has helped make the process easier.

“Foreign markets offer online brands and business the chance to chase profits overseas, as growth in both internet usage and the e-commerce wealth of nations continues to increase dramatically,” says Ian Harris, chief executive and founder of search engine marketing agency Search Laboratory. “Markets that were once unattractive to popular brands are developing rapidly both on and offline, making them easier to enter and trade successfully in a relatively short space of time.”

Clearly, many companies are willing to make the move into unfamiliar territory. So when should mid-market companies launch into a new space?

They teach you in business school to ‘think globally, act locally’

“Fundamentally, timing should not be driven by short-term factors, such as the strength of relative currencies. It should be about creating medium and long-term value,” says Henry Wells, mergers and acquisitions managing director at advisory firm Duff & Phelps. “The international diversification of revenue, providing it is well executed and undertaken when the company is ready to take on the commitment, will achieve this.”

But it might not be all plain sailing. British companies seeking customers abroad should be aware of the cultural differences in the markets they are targeting, something they would not often have to be too sensitive towards in the domestic market.

“Companies in the past have often been ignorant of cultural differences resulting in their credibility being tarnished,” Search Laboratory’s Mr Harris adds. “Cultural sensitivities need to be exercised across the board, not only online, but through all marketing, advertising and PR activities.”

Yet UK companies needn’t be put off targeting sales abroad because of cultural differences. For many the challenges of new markets will be broadly the same as those faced in their home market and the focus remains on the customer.

“Companies will understand the challenges that face them – they are the same challenges they face in their home market, just magnified by distance and cultural and consumer behaviours,” says Mr Wells of Duff & Phelps. “The winners are able to assess these challenges efficiently and react accordingly.”

Appointing a local representative will help establish a business in a new market, but their English skills and experience will need scrutinising.