No doubt all startups want to make it big and exit with pockets full of cash, but few manage billion-dollar status

Never mind the unicorn being an historic and heraldic symbol of Scotland, it seems the mythical beast renowned for its beauty, power and chivalry is now more commonly associated with Silicon Valley.

Defined as a private company valued at more than $1 billion, predominantly US-based and where technology reigns, unicorns are no longer the stuff of legend.

Uber, Airbnb, Snapchat, Pinterest, Dropbox – these are all names we know and value. Apart from the occasional Uber driver, they are far from legends. Yet what they have served to do is set a bar so difficult to clear that it both inspires and disheartens at the same time.

Aileen Lee of seed-stage fund Venture Cowboys once said: “The tech news may make it seem like there’s a winner being born every minute, but the reality is the odds are somewhere between catching a foul ball at a major league baseball game and being struck by lightning.”

With such success surrounding private companies, what is the incentive to list on the public markets?

Companies need cash to fund growth. While one common fundraising route is through selling equity stakes privately to venture capital (VC) and private equity backers or publicly via the stock market, a market listing is not a one-way bet.

Danny Cox, chartered financial planner at Hargreaves Lansdown, says: “The core downsides of selling equity in a company are the potential loss of control and loss of future earnings.”

Mr Cox says most companies raise money via an initial public offering (IPO) because they believe it will help to grow their value faster and to the extent that the seller’s remaining equity will be worth more than their previous and larger holding. 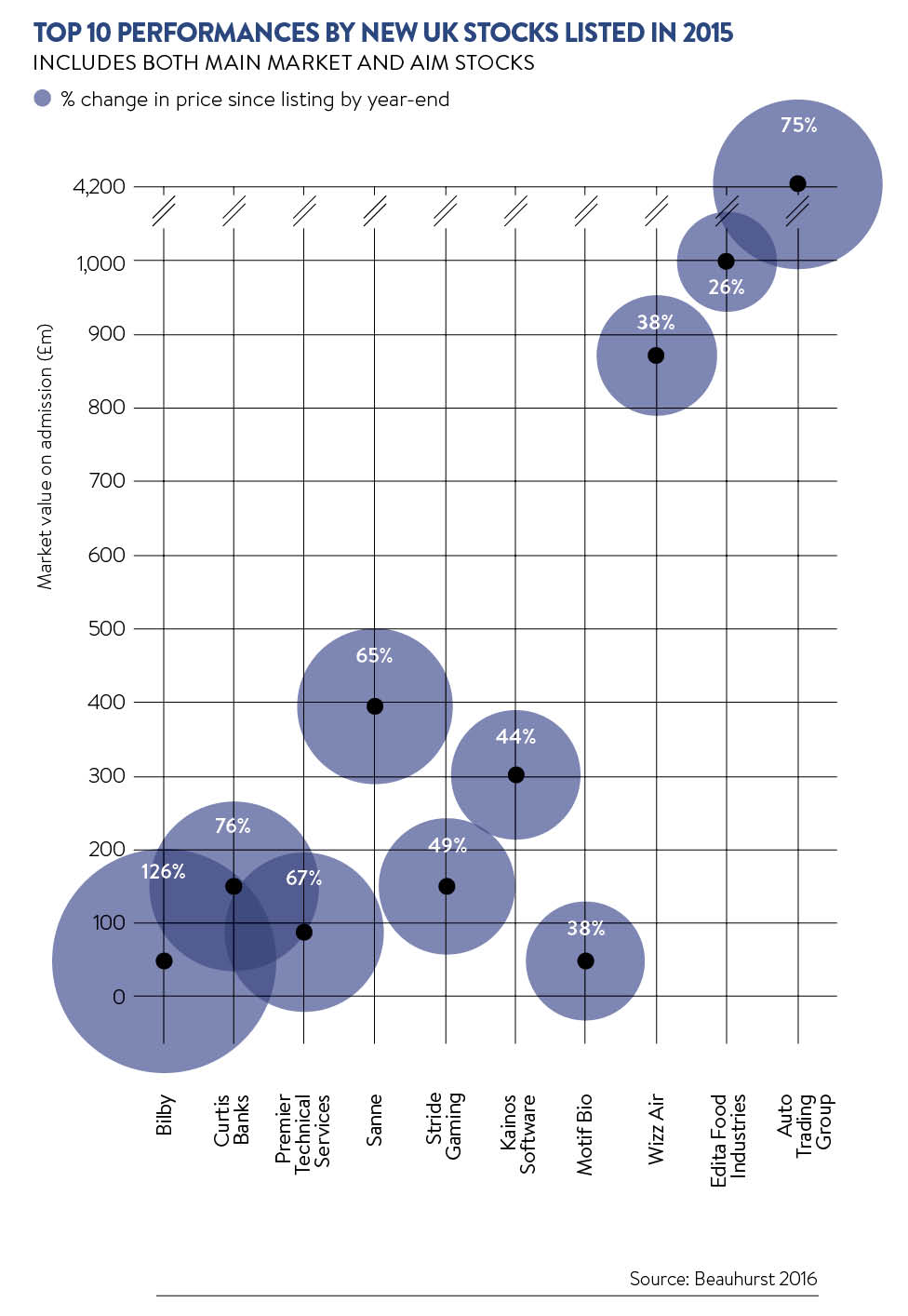 According to EY, IPO activity on London’s main market and AIM fell 46 per cent last year, with only 62 deals compared to 2014’s 114 IPOs. Proceeds also declined by 37 per cent to $15 billion against such headwinds as nervousness surrounding the general election, the slowdown in Chinese growth and tumbling oil prices.

Worldpay, however, bucked the trend in October. The largest listing of the year, valuing the online payment platform at £4.8 billion, renewed the markets’ faith in UK fintech and it is hoped this enthusiasm will continue.

With a booming housing market post-credit crunch, it’s no surprise Rightmove is among the UK’s biggest IPO success stories, according to Gervais Williams, managing director and fund manager at Miton. He runs more than £1 billion and boasts a long history of investing in smaller companies.

From a market capitalisation of £621 million in December 2008, not only a one-time unicorn, Mr Williams says Rightmove is also the “gorilla” of online housing retailers, dominating without a complete monopoly, and is now just over £3.5 billion in size.

Chasing Rightmove’s tail with their recent flotations, Countrywide, Foxtons and Zoopla have all enjoyed mixed levels of success though none opened to retail investors.

Mr Cox says: “Few companies offer shares in IPOs to the retail investor. However, particularly where a company is looking to reinforce or enhance its brand with the public, a retail offering helps to do this – more commonly this is with high street names.”

Facing the reality of the IPO hype

Apart from the vagaries and volatility of the stock market, valuing a company for flotation is very difficult; the company must strike a balance between obtaining good value for the shareholder selling, yet make the offer attractive to potential buyers.

Much of the hype around IPOs was born out of the tech bubble – the days of dotcom millionaires launching startups with much fanfare, yet coming to market far too early.

“Even recently we’ve seen some of the biotechs come in at quite an early stage and, although some of them have done well, I think the willingness to support those highly speculative companies is becoming more unsettled given the substantial market risks out there,” says Mr Williams.

It’s not just about technology. He describes how premium drink mixer startup Fever-Tree listed in 2014 with private equity backing and has since raised additional capital to scale up the business.

“It has grown like a weed since issue. It came to market with a market capitalisation of £200 million and has seen its share price rise so that is now £766 million. This is a fairly forward-looking valuation as even now it is still only doing £71 million of turnover,” adds Mr Williams.

Head of Downing Ventures, the eponymous investment firm’s VC unit, Matt Penneycard is frustrated by the unicorn concept. He says: “We don’t have IPOs in the same way in this country. There’s absolutely not a viable public exchange for these sorts of tech companies. There may be in the future, but we just don’t have a version of Nasdaq.”

Racing past their herd are the “four horsemen” – Google, Apple, Amazon and Facebook. With combined market capitalisations comparable to the GDP of Australia and each having a highly acquisitive strategy, Mr Penneycard says this is where the greater appeal lies – investing in companies that will be acquired by a leviathan.

Hargreaves Lansdown points to Google’s acquisition in 2014 of DeepMind, which develops artificial intelligence for computer games, last year’s purchase by Apple of VocalIQ, which develops technology to improve natural dialogue between humans and computers, and now Microsoft’s latest purchase. Keen on TouchType for its swipe technology SwiftKey, the £174-million acquisition demonstrates a growing trend for VC-backed success.

According to Gervais Williams at fund managers Miton, the “big daddy” of British unicorns is semiconductor intellectual property business ARM.

Initially a Cambridge-based subsidiary of Acorn computers, the BBC computer manufacturer, it was demerged and listed in 1998, joined the FTSE 100 in 1999 and now has a market capitalisation of £13.6 billion.

“It’s a proper unicorn,” says Mr Williams. “Its billions came not from VC backing, but much more from a plc that incubated a small opportunity over many years and it didn’t quite matter whether markets were up or down. It’s a nice model and one that could be used more.”

According to Judith MacKenzie at fund managers Downing, WANdisco was an early-stage big data software provider, listed on AIM in 2012, that received too much funding.

She claims there are hundreds of “money pits” propped up by investors’ desire to succeed, so they end up bankrolling projects for too long.

“WANdisco was once a darling for the market, reaching £15 a share. It’s now around £2,” says Ms MacKenzie. “Even last year they only managed to book around $15 million in sales, but racked up another loss of around $40 million. These types of companies are clearly speculative and could come right, but often at a cost to private investors.”