Improved technology and materials, alongside growing demand for treatments including Botox and fillers, are revolutionising the dental practice

Dentists are facing a constant revolution in their practice. They are treating an ageing population who are more knowledgeable about oral care and more determined than ever to keep their own teeth into old age.

Meanwhile, the affluent young are seeking cosmetic treatments to straighten, whiten and rejuvenate, not just their smiles, but their whole faces at the dentist’s surgery.

New technology has meant patients are now often spared multiple trips to the dentist and increasingly routine care is being delegated to more junior staff.

The whole experience is changing with many surgeries now offering treatments ranging from osteopathy and physiotherapy to Reiki, acupuncture and nutrition advice.

Martin Nimmo, a dentist at the Chelsea Private Clinic, in London, says surgeries are now taking a more holistic approach to patient wellbeing.

“I had a lady who had just finished a body wrap come to me afterwards for whitening. We offer non-surgical fat removal, colonics, Botox and fillers because there is more demand for services that benefit overall health,” he says.

“Patients are not willing to accept treatments that their parents had – big metal fillings and dentures – they want implants, invisible braces and teeth whitening.

“With finance it brings treatments that would have been for the rich and famous within the scope of the working person on a moderate income.”

Britain is the only country in the European Union where dentists and nurses are allowed to provide “injectables”, but Mr Nimmo argues that dentists are ideally placed because of the extensive knowledge of facial anatomy, greater hands-on experience and understanding of facial muscles.

“If someone asks my patient where they had their Botox or filler, then I have not done a good job because it should be a subtle result that gives the face back the structure and support it has lost with time,” he says.

“The controversy over injectables is decreasing and the younger generation of men as well as women now see it as part of their grooming. New standards are being introduced and Health Education England are working on a training framework for injectors.”

Dentists are seeing an increasingly elderly population, but the teeth of today’s grandparents are much simpler to treat than tomorrow’s will be, Mr Nimmo says.

“Dentures are very easy to clean, metal fillings can be removed and replaced, and modern adhesives mean we need to remove much less of the tooth with each restoration than in the past,” he says.

“But implants need to be kept incredibly clean which is much more difficult as sight and dexterity fail. They will need help as they will probably have a mouth of quite complex work.”

The current focus on preventing tooth decay in children will hopefully mean they will have fewer missing teeth and have healthier mouths than any other generation as they age, he adds.

Practice-based technology is expanding at an exponential rate allowing dentists to offer a wider choice of treatments that may previously have required anaesthetic or hospital visits. 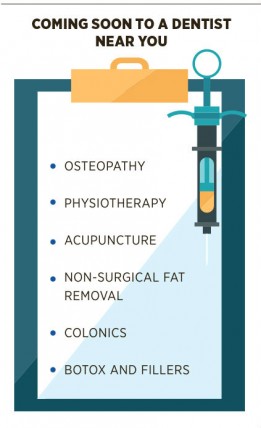 Digital X-rays offer almost instant on-screen results and lower exposure to radiation, while intraoral cameras mean dentists can take detailed photographs from different positions inside the mouth, displayed on a screen in front of the patient for real-time feedback and analysis.

The iTero intraoral scanner negates the need for impressions, which make some patients gag, and CT scanners in surgeries mean images can be taken for the preparation of implants without the need for a hospital visit.

Greater use of fluoride varnishes, fissure sealants and ozone mean tiny faults in the tooth can be prevented from turning into cavities, while lasers and lights can kill bacteria and detect abnormalities.

Ben Atkin, who has nine practices across north-west England providing high street dentistry as well as emergency services and care for the homeless, is also using new technology.

“We use technology to educate our patients not just to fill holes in their teeth,” he says. “Sometimes we have to say we aren’t restoring your teeth until you improve your oral hygiene. We use text reminders, online booking and YouTube videos to help improve patient trust as many people are nervous about visiting the dentist.”

Mr Atkin, whose practices treat patients in deprived areas of Greater Manchester and Merseyside, adds: “Tooth decay is decreasing nationally, but it is concentrated in deprived areas. A patient in Chelsea probably won’t need any fillings, but one in Salford would need five – and that is our core business.

“We offer Botox and whitening, but we use that as a tool to get people to come in. Dentistry has changed dramatically in the last 20 years – we have to keep up with the times.”