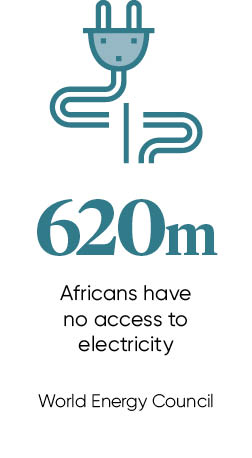 The figures are startling. An estimated 620 million Africans have no access to electricity and in some rural areas 86 per cent of the population still rely on candles, kerosene and kindling to survive, according to the World Energy Council.

Decades of neglect, mismanagement and a lack of investment have left the continent’s energy infrastructure in ruins. But it’s a state of affairs that puts Africa in a unique position too, presenting the opportunity to develop new energy networks from the ground up, rather than patching up old assets, or building new coal-fired power stations just as the industrialised world looks to close theirs.

In February, the African Progress Panel launched a new report, Lights Power Action: Electrifying Africa, in which its chair Kofi Annan argues: “Traditional approaches to extending the grid are no longer viable as the main option for African countries. They will take too long and will not meet the needs of our growing economies and societies. Instead, governments and their partners need to seize the opportunity to reimagine their energy futures.”

There will, of course, always be a need for a national grid, and grid-connected mega-projects such as large dams are essential to scale up national and regional energy generation and transmission. “Big urban centres and industrial hubs will always benefit from a centralised type of infrastructure and supply,” explains Christoph Frei, chief executive of the World Energy Council, because they need base-load electricity that can only be supplied by a high-powered grid.

However, Max Bankole Jarrett, director-in-charge of the Africa Progress Panel, says: “Where no infrastructure exists, there needs to be innovative ways of trying to develop energy systems.” Mini-grids, small-scale hydro, household solar, all have a role to play, he says, bringing power to communities too remote to connect to the grid.

As the cost of renewables drops, Africa can leapfrog into a new era of power generation, with new electricity systems, technologies and business models that could be as transformative in energy as the mobile phone has been in telecommunications.

“The climate agenda is an opportunity for Africa to do energy differently,” says Mr Jarrett, and the chance to by-pass belching chimneys and head straight towards a low-carbon economy.

In Ghana, Israeli-owned Yam Pro Energy is looking at innovative technology that will harness the power of the waves that crash on to country’s coastline, while in Uganda’s Soroti District, Dubai-based Access Power operate East Africa’s largest solar plant, which is now producing 50 gigawatts a year.

Kenya champions geothermal energy, which now accounts for around half of the power on the national grid, and there are plans to produce an extra 2,000 megawatts (MW) of power from steam in the next six years, thanks to international loans from the likes of Germany and Japan.

Hydro dominates the energy landscape in Ethiopia, generating 80 per cent of the country’s power, and although foreign investment has played a role, Ethiopia is self-funding the new 6,000MW Grand Ethiopian Renaissance Dam.

However, according to New Deal on Energy for Africa, an initiative spearheaded by the African Development Bank, only a fraction of Africa’s renewables are currently being harnessed. Hydro power, for instance, may provide a fifth of current capacity, but not even a tenth of its potential is being utilised.

The New Deal is ambitious and hopes to create 130 million new on-grid connections, 75 million new off-grid connections and provide 150 million households with access to clean cooking solutions. But ambition costs and the bank’s figures suggest this could cost as much as $90 billion a year.

The need to cut carbon is seen in the growth of renewables, he says, while the key risk element for Africa is extreme weather events. This is leading to greater regional integration, he explains, as a way of balancing out the impacts of droughts and floods.

But it’s the new business models which really excite him, especially the huge opportunities to transform lives.

Of the 315 million people the African Progress Panel say could gain access to electricity in Africa’s rural areas by 2040, it is estimated that only 30 per cent will be connected to national grids. Most will get their energy from off-grid household and mini-grid systems, breakthrough technologies that can provide a range of energy services to homes and businesses, and offer a real and sustainable alternative for remote villages.

Entrepreneurial businesses such as M-Kopa in East Africa are providing families with a household pack that includes a solar cell, battery, lamps and a cell-phone charging station, but also bigger goods such as TVs and fridges.

Although many of these households bring in just a few dollars a day, micro-leasing schemes mean that by adding a small amount to their daily phone bill, they can afford to pay back the money. “It’s something that is changing the lives of millions of people,” says Mr Frei.

Ethiopia is self-funding the new 6,000MW Grand Ethiopian Renaissance Dam, which will be Africa’s largest when completed

The role of government

This kind of innovation is crucial to Africa’s energy revolution, to promote the ideas and encourage the entrepreneurs who can bring power to the people, but governments need to be proactive, too.

“Historically energy grids were government business,” says Mr Jarrett. “It was their role to provide power, but often they haven’t been able to do this at the scale or at the service levels society demands.

“At a political level, there must be a willingness to adopt holistic programmes that ensure there is an enabling environment in each country, which allows for the private sector to come in and offer its solutions to meet the energy demands… because the challenge is so huge that it is clear government alone cannot deal with it.”

Mr Frei agrees that leadership needs to be bold and far-sighted, and has an important role to play in encouraging innovation. And with many local entrepreneurs operating on absolute minimal profits, regulatory restraints need to be kept to an absolute minimum.

Foreign investors are central. “Import complications are the biggest impediment for progress,” Mr Frei says. “Some things cannot be locally produced immediately… but to get [the technology] on the ground cheaply and effectively, countries need to look abroad and not put barriers in the way.”