Financial technology firms are helping banks to free data, which was once held in fragmented systems, and realise its potential value

If you worry that all of your bank accounts, loans and investments are tied up with one or two big financial services providers, banks understand your pain. They feel the same way about their data. The keys to storing and managing data have long been held by large data aggregators and database providers.

The problem with relying on firms for so much is that switching service providers or selecting a bunch of the best small providers becomes difficult. The perceived scale of change is too great, the separation of services appears too complex or the connecting of providers seems too costly. Consequently, banks have found their ability to use information has been restricted to the services offered by big providers. There is also limited competitive pressure on providers’ prices.

“Five years ago the lion’s share of spending around data was on databases,” says Adam Wilson, chief executive at Trifacta, a data transformation company. “End-user productivity and insight was a much smaller percentage of the market. Yet people recognised the most pain – and the most value – tended to be found in those two areas.”

The commercial pressure to unlock that value has been growing as the more aggressive banks, the big digital-native companies such as Google and Amazon, and small financial technology (fintech) firms realise ways to make a return from this data, says Álvaro Ruiz, global chief information officer of Santander.

“The main challenge is how to create the infrastructure that will allow us to go to the market with data and monetise it,” he says. “The use cases within the bank are well defined. Monetising data is a new business model.”

Exciting new approaches to data are allowing banks to use it more freely without having to change their big service providers. Santander is engaging in a development programme for application programming interfaces (APIs) which allow data to move between internal and external systems more easily.

“Now we are open to consume and provide APIs to the market,” says Mr Ruiz. “We are still developing them, but the infrastructure is in place to support their use. Our innovation area analyses fintechs in the market and what we can consume from and provide to them.”

This new paradigm is being supported in some cases by open source initiatives. These make the source code for technology available to members, giving them the flexibility to build new tools with it.

One example of this is Apache Hadoop, an open source storage and retrieval system, which was based on principles set out by Google engineers in 2004. Like Google, Hadoop can store and then find pictures, text or any other information.

“We use Hadoop and it is a useful tool for exploring data, but other tools are then needed to make that data consumable by the market,” says Mr Ruiz.

Another is OpenMAMA, which lets firms connect streams of capital markets data with tools to use it, regardless of the data source. By operating as a collective to develop code, open source initiatives allow it to be tested by many contributors, giving tools the same scale of development that a big IT firm could apply.

Financial firms may have difficulty contributing to these as contracts often stipulate that employees’ work is owned by the firm, limiting their capacity to share code with others. Consequently fintech firms can fill a valuable niche, sitting between the banks and the technology providers.

“In some cases smaller firms are being used as a proxy by banks,” says Glenn McClements, senior vice president of engineering at SR Labs, the originator of the OpenMAMA code. “Recently we are seeing chief technology officers at the world’s largest banks and hedge funds making the case for contributing more themselves, but that it is happening slowly.” 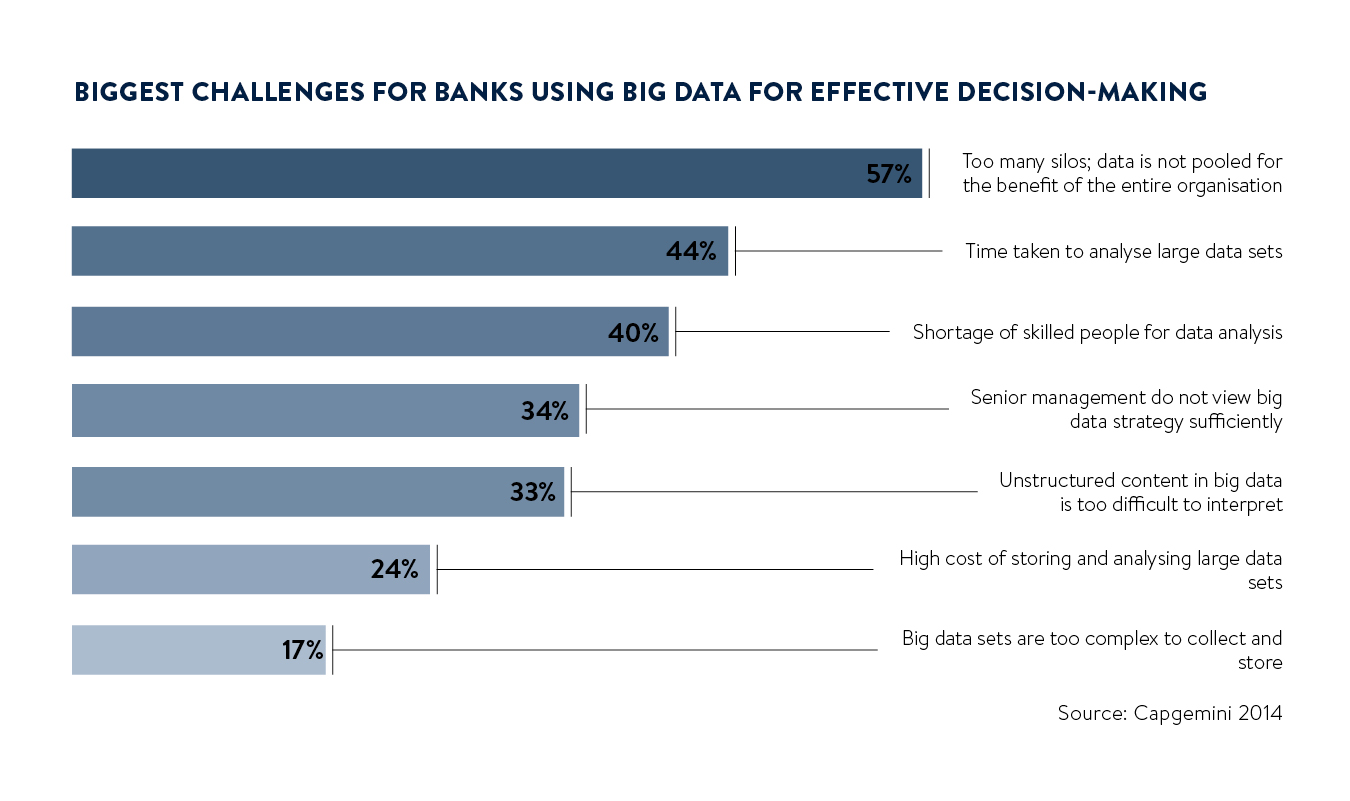 SR Labs develops tools that work with OpenMAMA, enabling firms to take the streams of market data that aggregators provide and use tools developed by other service providers to work with it, rather than relying on the data aggregators’ own tools.

Other firms liberate the data that is contained within banks, which existing data models find challenging. For example, putting a jigsaw together knowing only how many bumps and flat edges each piece had would be impossible. Yet financial services firms have spent years trying to build a complete picture of customers using relational databases that keep numerical data just like that. For some tasks that is useful, but for others it is too limited.

Trifacta prepares data using Hadoop so that a business can make practical use of it. For example, RBS had data on customers fragmented across multiple systems reflecting products they had sold, such as mortgage and savings accounts. Trifacta developed a data “lake” that let the bank explore the customer information in one place.

Tools can also be provided online so that banks do not have to install systems making them tied-in to the provider. In some cases engaging with software provided as a service in this way can require banks to overcome a psychological barrier, says Christian Nentwich, chief executive of Duco, which provides an online reconciliation platform. The Duco Cube is designed to let firms upload lots of data, regardless of format, check it and reconcile millions of data points in a few minutes.

“A technical solution would cost millions of dollars upfront, and need a large team built to install it and transform data, squeeze things into the right format and load the systems,” he says. “The rise of end-user, self-service based analytics and reporting solutions is changing that.”

Banks are seeing profitability decline as low or negative interest rates make lending less profitable. Equally their costs are rising as regulation determines that the capital buffer they hold to protect themselves against shocks is increased. This makes the fixed costs they face from their legacy providers of technology look even more expensive. Any opportunity to find greater profitability is, therefore, grasped with both hands. The motivation to liberate data and engage with fintechs to do that is growing.

Mr Ruiz adds: “Banks are conservative by definition, but Santander wants to be ahead of the competition, we need to analyse every possibility as soon as possible and keep the right risk balance.”