Crossing the border despite Trump

At 10:30 on a sunny November morning, a group of Central American migrants left their Mexico City refuge and headed to the Mexican commission of refugee aid to ask for information on the process to follow to obtain asylum in the country. Like hundreds of thousands of others, they had embarked on the perilous route north towards the USA, fleeing the region’s endemic gang warfare.

Fatima, 19, travelling with her two-year-old, Kike – short for Enrique – fled El Salvador after gang members tortured and killed her boyfriend and threatened to do the same to her and her son. Nancy, 33, from Guatemala, had to leave the small city she lived in after her father passed away, leaving her and her mother with debts they couldn’t pay back. In debt to five different Colombian loan sharks, she and her mum grabbed a suitcase in the night and left never to go back. Henry, a 30-year-old Honduran, also made a quick exit after receiving death threats for going out with the wrong girl. His younger brother, Edwin, unable to find a proper job, decided to travel with him.

By now, all of them have heard of US president-elect Donald Trump’s tough anti-immigration posture, his promises to build a wall along the Mexican border and to deport millions of immigrants living illegally in the US. But their way of dealing with the news varies. Some have decided to rush to the US border before it’s too late; others are tempted to wait for better days.
“I was already in Mexico when I found out Trump had won,” Henry says. He is still recovering from an operation to remove his appendix, performed at the Guatemala-Mexico border.

“I want to stay in Mexico now, find some work. It’s going to get ugly with him, it’s better to wait and see how things evolve.” Once he arrives at the refugee commission, Henry will spend several hours explaining his situation to authorities, fill in the necessary forms and provide any document that can help him prove his life is in danger at home. He will then have to turn up at the commission every week and sign the registry until the end of the process, which can take up to three or four months.

The number of migrants who seek refugee status in Mexico has gone through the roof in recent years. Between January and September, the Mexican branch of the UN refugee agency, UNHCR, has received nearly 6,000 applications and is expecting that number to reach more than 8,500 by the end of the year, up 148 per cent compared to last year. According to the agency’s forecasts, next year will see another spike in demand – 21,000 applications is their most conservative estimate.

“We see entire families, up to 18 people, including grandparents,” says Mark Manly, from UNHCR’s Mexico City office. “Increasingly, they’re not seeing Mexico just as a country of transition but as a destination.” To respond to these increasing numbers of asylum seekers and refugees, UNHCR says it has invested in several infrastructure projects to both build and extend existing shelters. 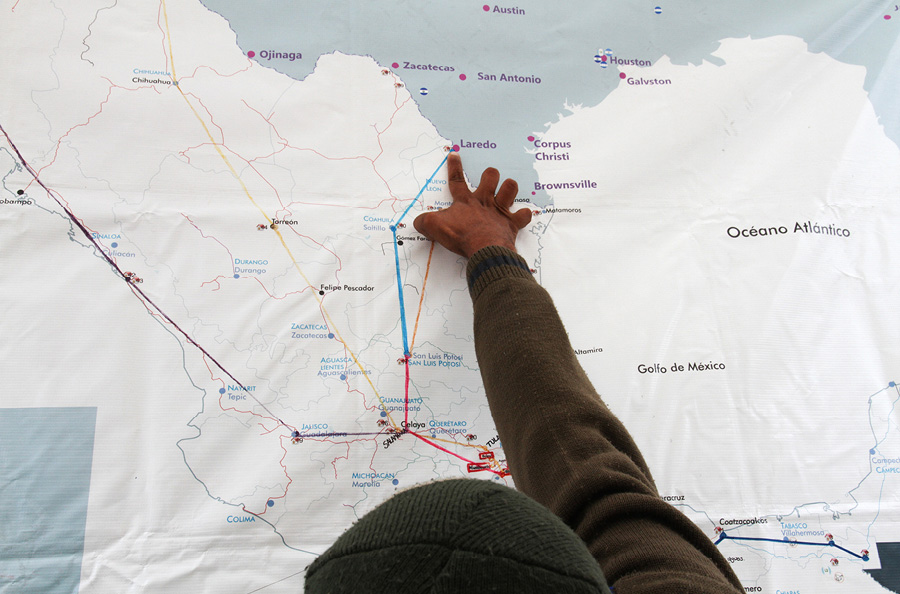 No matter the risks

The number of asylum seekers still pales in comparison with the more than 620,000 apprehensions made last year by Mexican and US immigration authorities. Most migrants are still obsessed with the American dream, whether for economic opportunities or family reunion.

Sandy, the 33-year-old Guatemalan who escaped loan sharks, said she was never able to find a stable job to pay back the family’s debts. “I can’t go back to Guatemala now, I don’t have anyone or anything there,” she says. “All I can do is give this a chance… or die in the attempt.”

Migrants who make it to the Mexico-US border have often been on the road for over a month, a long and perilous journey marked with hunger, thirst and physical pain. The threats they face range from human trafficking, rape, theft, kidnapping and extortion from Central American criminals, Mexican drug cartels and police officers alike. For them, US politics, talks of a wall, or anti-immigration rhetoric are unlikely to be a deal breaker.

A large number are not on their first try; neither is it the first time they have been faced with an US administration stridently opposed to their attempts. Barack Obama has deported more people than any other US president before him. In 2014, when record numbers of unaccompanied minors and families turned up at the border with Mexico, he obtained a commitment from Central American leaders that they implement a US-style – and US-trained – militarisation of migration authorities along the borders.

The subsequent increase in detentions – and deportations – from 80,000 in 2013 to over 180,000 in 2015, led to more human rights abuses, NGOs say, but also pushed migrants to take new paths, away from the humanitarian networks that had developed along more traditional routes. It has not been much of a deterrent.

“Whatever the challenge, these migrants who come with a set idea in mind, they will go for it,” says Blanca Rivera, a 56-year-old Mexican who works at a migrant shelter in Ciudad Juárez. “Their immense necessity surpasses any fear of the dangers they may encounter.”

If anything, among these migrants, Trump’s discourse has prompted a sense of urgency. At the Ciudad Juárez migrant shelter, Joey, a 38-year-old from Guatemala with a licence in physical education, says a lot of migrants he met along the way were trying to get to the US border before Trump takes office in January. “For me, it’s still the same but some of them were in panic.”

It is a feeling shared by non-governmental organisations working with migrants. “I have no idea what to expect in the months to come, but currently we are trying to organise a way to shelter a potential influx of people arriving in a way that was done in the 1980s, during the civil wars,” says Stevie Dunning, at the Casa de los Amigos, a Mexico City shelter for vulnerable persons in transit.

Dunning says it is hard to imagine the situation becoming worse – “but of course it can”. Instead, he focuses on the day-to-day of providing for the shelter’s occupants. “Anything other than that,” he says, “can become quite overwhelming.”