Terrorist attacks are a constant threat for the events sector

The devastating Paris attacks, California shootings and constant terror threats have placed security top of the agenda for event organisers.

But according to a 2016 EventHuddle poll, 93 per cent do not feel adequately trained for an incident. 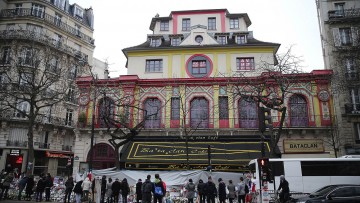 People laying flowers outside the Bataclan
concert hall in December 2015, a month after the Paris terror attacks

Just weeks later, 14 people were killed and 22 seriously injured in a shooting at a conference centre in San Bernardino, California, while Brussels cancelled New Year celebrations after an apparent terror plot was uncovered.

With the Home Office assessing the UK’s current threat from international terrorism as “severe”, meaning an attack is thought highly likely, event organisers are naturally aware of their vulnerability.

Effective planning is the first line of defence, according to Mr Cooper and his colleague Chris Scott, who worked as head of emergency preparedness, testing and exercising for London 2012.

“Security must be properly integrated, but proportionality is key otherwise you will burn budgets and not be a lot more effective,” says Mr Cooper.

Indeed, 48 per cent of events professionals expect costs to rise because of the need for greater security, according to MPI Meetings Outlook.

Planning and risk assessment for a large-scale event includes looking at the general political climate, previous threats and hoaxes, as well as collaboration with police, other emergency services and public authorities

“What the sad events of Paris have done is made people dust off their security plans,” adds Mr Scott. “In a Paris scenario, there’s no time, so rigorous testing means you can react quickly and there’s a good chance of making the best decisions.”

Planning and risk assessment for a large-scale event includes looking at the general political climate, previous threats and hoaxes, as well as collaboration with police, other emergency services and public authorities. 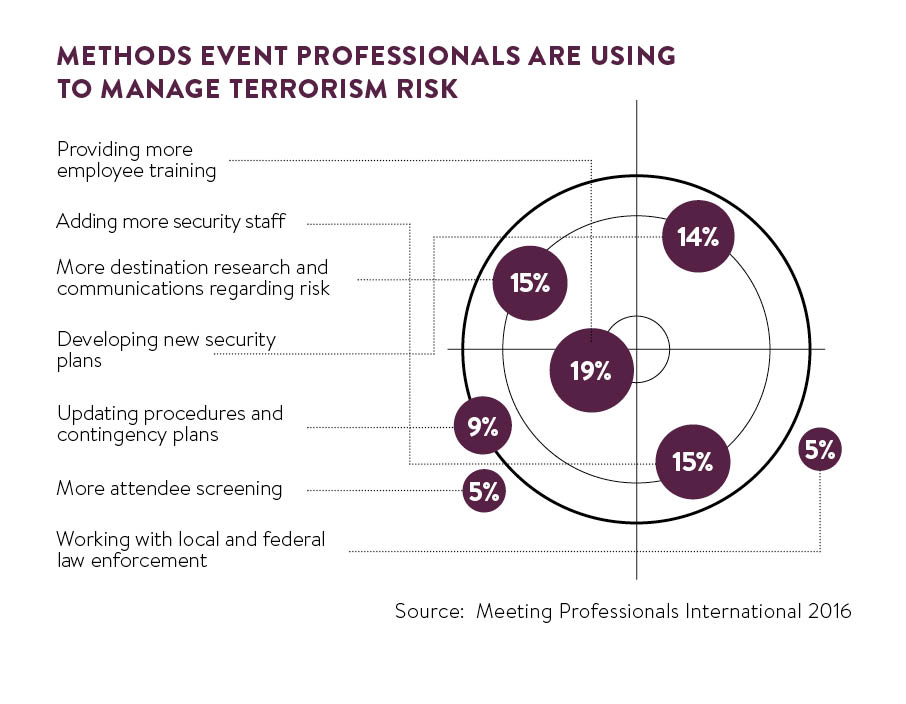 In-depth site visits are a chance to test venues and evacuation routes, whether there is a distinct alarm bell for a terror threat, as well as checking out whether mobile devices will work properly.

Even for smaller events, best-practice elements, such as a laminated contact list of useful names and numbers, can be simple but save valuable seconds, while close co-operation between the event owner, organiser and venue, as well as other suppliers, is critical.

Ian Cummings, a regional director at global agency CWT Meetings & Events, points out that while security has “shot to the top of the priority list for our clients, it’s not a one size fits all”. When it’s an overseas event, having a team based in the destination providing insider information is valuable for extra insight, he adds.

Clear communication channels proved crucial for Elliott Grant, business director of the Black Tomato Agency, when his team of nine were leading an 84-strong corporate incentive trip in Paris as the November attacks unfolded. 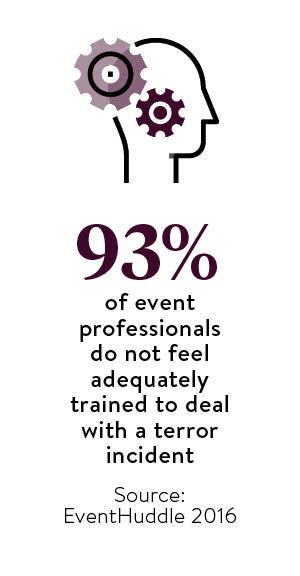 Having a dedicated point of contact as the team worked through its contingency plan meant instructions could be relayed speedily and accurately as attendees were taken to safety.

Grant explains that as he was in the UK, he could debunk any “misinformation they were hearing on Facebook and Twitter”, and set up a text alert with verified news, while a crisis management team reorganised travel arrangements.

Despite the terrifying attacks, and those that took place at the Charlie Hebdo magazine offices in January 2015, it’s pretty much business as usual for Paris and the rest of Europe.
Nearly half of corporate travel buyers report no change to their company’s policy while, according to a Global Business Travel Association poll, 1 per cent temporarily suspended European travel in the days after the November incidents.

Meanwhile, MKG hospitality industry data shows the hotel sector wasn’t hit as badly as might have been expected, and the Euro 2016 football tournament being held in France in June and large exhibitions should buoy hotel demand this year.

Events agency DRP’s group chief executive Dale Parmenter says: “Paris was dreadful, but I don’t think it will have the massive negative effect that occurred after 9/11.”

What Paris did show is that unpredictability is the new normal.

Event venues across the UK responded accordingly, with companies such as Live Nation, AEG, which operates Wembley Stadium where England played football against France days after the Paris attacks, and major convention centre ExCeL London ramping up security.

At the Scottish Exhibition and Conference Centre in Glasgow, director of live entertainment John Langford explains: “Security measures on our campus are reviewed constantly and scaled to each event on a case-by-case basis.”

Being heavy handed with security can also be a negative in events, where look and feel is crucial. “Consider what attendees will find appropriate,” says Mr Scott.

Looking out for cyber criminals

The technology age has also changed the threat with cyber security a growing concern. Cyber security expert Jessica Barker says the major worry for events is that the industry lags behind sectors like finance, pharmaceutical or retail.

“Criminals often go for the low-hanging fruit, those least prepared,” she warns. Dangers could include a cyber criminal accessing attendees’ personal or financial details, or even hacking into venue or hotel systems to override electronic gate or door-locking.

“Anything that runs on the internet can be hacked and potentially used as an attack that can impact on physical safety,” says Dr Barker. “That can extend as far as transport disruption and emergency services being able to respond to a physical attack.”

However, technology can mean a greater ability to screen attendees and on-site staff as CCTV, biometrics and radio-frequency identification embedded in tickets allow risks to be spotted earlier.

Ultimately, “even in the most effectively policed countries, terrorist incidents cannot be completely mitigated”, says David Burrill, director of security agency Burrill Green and former chief of staff for the intelligence and security centre of UK Armed Forces.

“Be aware of your vulnerabilities, be intelligence-led and be driven by a robust risk assessment,” Mr Cooper concludes. “And remember, you’re running an event, not a security event.”