Powerful artificial intelligence is now cheap, simple and a natural fit for business

Businesses are embracing artificial intelligence. Even relatively low-tech sectors, such as toymakers, are adopting it. The new Hello Barbie doll, topping Christmas wish-lists, is wi-fi enabled so it can hold conversations with children in any language.

Marketers are getting into artificial intelligence or AI in a big way. They use data analytics to crunch the value of each new customer, factoring in hundreds of variables. It’s the sort of maths Nasa was struggling with a decade ago. Even farmers use AI. Combine harvesters are pilotless, driven by robots. Data is gathered on crop yield, so fertiliser can be varied to boost production.

Behind the rise in AI

So what’s happening? Why is AI now being harnessed by businesses?

The obvious answer is that computing power is so cheap. Moore’s Law predicted computing power would double for the same cost every two years. Today, a Raspberry Pi computer costing $5 packs data storage or RAM that retailed for $681,472 in 1984. Storage costs are falling exponentially. A gigabyte of storage has fallen from $690 in 1995 to $0.03 today. Businesses can use AI knowing the cost of computing is affordable on any budget.

The collapse in the cost of computing has coincided with the rise of a number of other trends, all of which are feeding into each other. The emergence of the cloud is a major factor. Before the cloud companies needed to host data and computing power on-premises. This is expensive in terms of capital expenditure, licences, and maintenance costs. It requires a lot of technical expertise. By contrast, the cloud means businesses can access storage and computing power on demand, with a pay-as-you-go cost model. 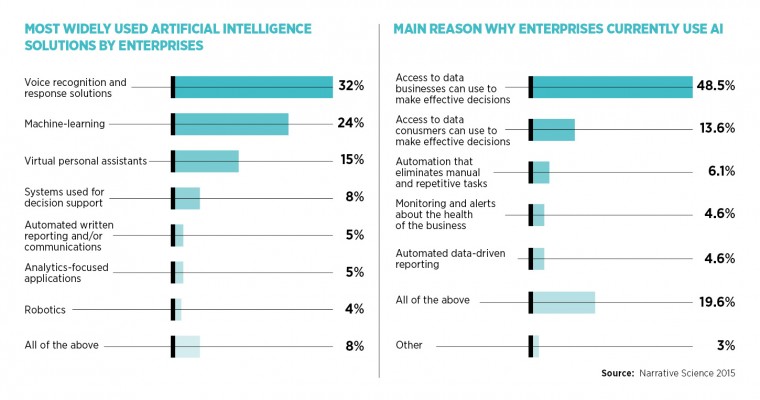 Broadband quality has improved. Bandwidth is vital. Cloud services are redundant if companies can’t send and access data in a timely manner. Latency or ping is also crucial. When Hello Barbie wants to talk to her owner, she needs to be able to gather data, send it to the ToyTalk servers, which process the information, and receive the sound file to speak all within a second.

The ease of handling data has triggered an explosion in data collection. There are sensors everywhere. The internet of things is the name for the trend to connect objects to the web so they can communicate with servers. Indian consultancy Tech Mahindra is pioneering smart cities, where sensors are ubiquitous. Dustbins report when they are full. Traffic lights can be rephased automatically throughout the day to optimise vehicle flow. Car parking spaces report when they are occupied to re-route cars to other locations. Milton Keynes is currently working with Tech Mahindra to install these sensors in order to manage the city with AI.

A key ingredient in adoption of AI by businesses is that it is increasingly simple to use. Some of the most sophisticated AI platforms are designed to be used with no tuition.

Amazon’s machine-learning engine illustrates this perfectly. Ralf Herbrich, director of machine-learning at Amazon, explains how easy the service is to use. “We wanted to make AWS [Amazon Web Services] machine-learning something any developer could use. We are aware that what might be easy for me and my colleagues to use isn’t necessarily easy for some developers to learn. Our feedback at first was that we made it too complex. Developers didn’t want all the fine tuning knobs. They didn’t want to understand the maths. So we removed them,” he says.

Now using AWS is spookily simple. A click-through wizard guides developers. Click on the data you want to crunch. Specify what you want. And a couple of minutes later the predictions return, together with an indicator of the reliability. “For developers who want the knobs, they can have them,” says Mr Herbrich. But he is proud of the fact that the most cutting-edge AI money can buy is available to any company.

As AI develops, one of the biggest trends won’t involve any humans at all. AI is developing itself. The ultimate goal is to produce a machine so clever it can upgrade autonomously. At that point, an infinite iteration of improvement is possible leading to what some claim will be a god-like intelligence. The process is underway.

The software notices what works and what doesn’t, and the code is upgraded without human intervention. In August, Aurora announced it had reduced errors by 65 per cent when recognising faces through the application of machine-learning. This methodology will accelerate AI development, making it evermore powerful for commercial applications.

AI in the future workplace

So where does this leave us? Quite simply, powerful AI is now cheap and simple for businesses to deploy. The Slack messenger platform, used by thousands of companies, has the Slackbot virtual assistant. It can answer questions. The goal is to have a truly conversational Slackbot which can perform sophisticated tasks.

We have phones that converse with us and cars that correct lane-drift automatically.

The tech industry is aware of how far we’ve come. Abdul Razack head of big data and analytics at Infosys, the $9-billion sales IT consultancy, observes: “2016 is the year machine-learning will make the leap from the workplace to the consumer. We’re already seeing it happen with self-driving cars from Tesla and Amazon Echo’s [cloud-connected smart speaker that responds to] voice commands. Next year, machine-learning will quietly find its way into the household, making the objects around us not just connected, but smarter every day.”

The challenge for businesses is to become part of this explosion in AI. When even farmers are running algorithms, it’s time to get stuck in.

A BRIEF HISTORY OF AI

One of the features of artificial intelligence (AI) is that no one can agree on a definition. John McCarthy coined the term in 1955. He admitted the word “intelligence” was problematic. All definitions relied on comparisons with human intelligence with implications of creativity and consciousness. Although he stressed that machines would work very differently, this conflict has never gone away.

In the late-1980s, the futurist Ray Kurzweil predicted chess computers would able to beat the best players by 2000. This was an exciting concept. Chess is a near-infinitely complex game. An AI grandmaster would surely need to “think” like a human. Yet when IBM’s Deep Blue beat world champion Gary Kasparov in 1997, there was little applause. The brute-force algorithms of Deep Blue weren’t evidence of real intelligence, critics countered, merely blind maths.

Each leap forward is met with the same lament that it isn’t “true” AI. Robot pioneer Rodney Brooks created the Roomba autonomous vacuum cleaner in 2002, which used sensors to navigate a room. It ushered in a new era of autonomous robots. But was the Roomba AI? It’s so crude, said critics. It could do one job and not too well.

As AI has improved, with landmarks such as IBM Watson winning the Jeopardy! quiz show and Google Translate instantly converting Estonian into Japanese, this debate has flared up. Are these engines really intelligent or merely advanced calculators, blindly throwing up answers?

In the coming decades AI is going to improve exponentially. Mr Kurzweil forecasts by the 2029 machines will chat so well they will pass the Turing test. In the 2040s machine intelligence will be a billion times more powerful than human intelligence.

At what moment will true AI emerge? The philosopher Daniel Dennett says no machine can think like a human without being human. Consciousness is a requirement. Everything else is imitation.

Does it matter? Probably not, for two reasons. First, in the coming decades AI software will acquire faculties so profound they will resemble human intelligence for intuition and versatility. And second, we’ll merge with these machines. Mr Kurzweil predicts by 2045 humans and AI will integrate, multiplying our intelligence by unimaginable orders of magnitude. At that point, the debate will be moot.