During the first nine months of this year, when Brexit negotiations began, there was a comfortable 7 per cent growth in foreign companies buying in the UK. Purchases hit a total value of $84.5 billion, according to figures from Thomson Reuters, one of the highest year-to-date totals in a decade.

Such growth was unexpected and the dire business commentary is being replaced by cautious optimism.

“The UK remains an attractive destination for buyers, even at a time when nobody knows the outcome of Brexit talks,” says Philip Whitchelo, a vice president at Intralinks. The company’s Deal Predictor study shows that Germany and France, in contrast, have seen a downturn in inbound acquisitions.

Of course, the Brexit vote rather diminished the value of the pound, which is still on average down more than 10 per cent against the dollar, offering foreign buyers better value. Among American buyers, AMC Theatres acquired Odeon & UCI Cinemas for $1.2 billion, citing the favourable currency exchange.

The benefits have been limited, nevertheless, with a poor sterling hurting profits when foreign buyers convert pounds back into their currency. Steve Ivermee, managing partner of transaction advisory services at EY, says opportunistic inbound acquisitions have eased off, which suggests that for buyers “fundamentals, such as economic exposure and the quality of an asset, play a more important role than currency movements”.

But the outcome of Brexit remains unnervingly unclear and this might be expected to upset acquisitions. The answer to why it has not really done so lies in the fact that uncertainty has become normal.

“Right after the Brexit referendum, a number of things were on pause,” says Iain Macmillan, global head of mergers and acquisitions (M&A) at Deloitte. “Things are now picking up again and people who thought it was going to be incredibly different are a little more comfortable.”

In fact, the unsure business environment is even serving to drive acquisitions with private funds scooping up a number of UK businesses’ less desired assets. UK businesses have also been bolstering their own position, making $92 billion of outbound acquisitions this year, according to Thomson Reuters figures. Agreements include BAT’s acquisition of Reynolds American for $49 billion, creating the world’s largest publicly listed tobacco firm. Meanwhile, domestic deals were up 96 per cent.

The more M&A activity taking place, the more confidence in the market. In a Deloitte survey, the proportion of UK chief financial officers expecting M&A activity to decrease over the next three years has dropped from 40 per cent last year to only 11 per cent.

As a minimum, the UK leaving the European Union is seen as a manageable danger. “Businesses operate in the world of risk, and during any acquisition the aim is to understand and mitigate that unpredictability. Brexit is being treated as yet another risk for businesses and they increasingly think they can manage it,” says Sriram Prakash, Deloitte’s head of M&A insight.

Some industries are faring better than others. The real estate sector is most active, with inbound deals up 186 per cent at $20 billion. Financial services were active but sluggish in growth, Thomson Reuters data shows. Several sectors fell. Telecoms had only 13 deals in the period and they were small, totalling $1.7 million. Consumer staples dropped 18 per cent to $3.7 billion. 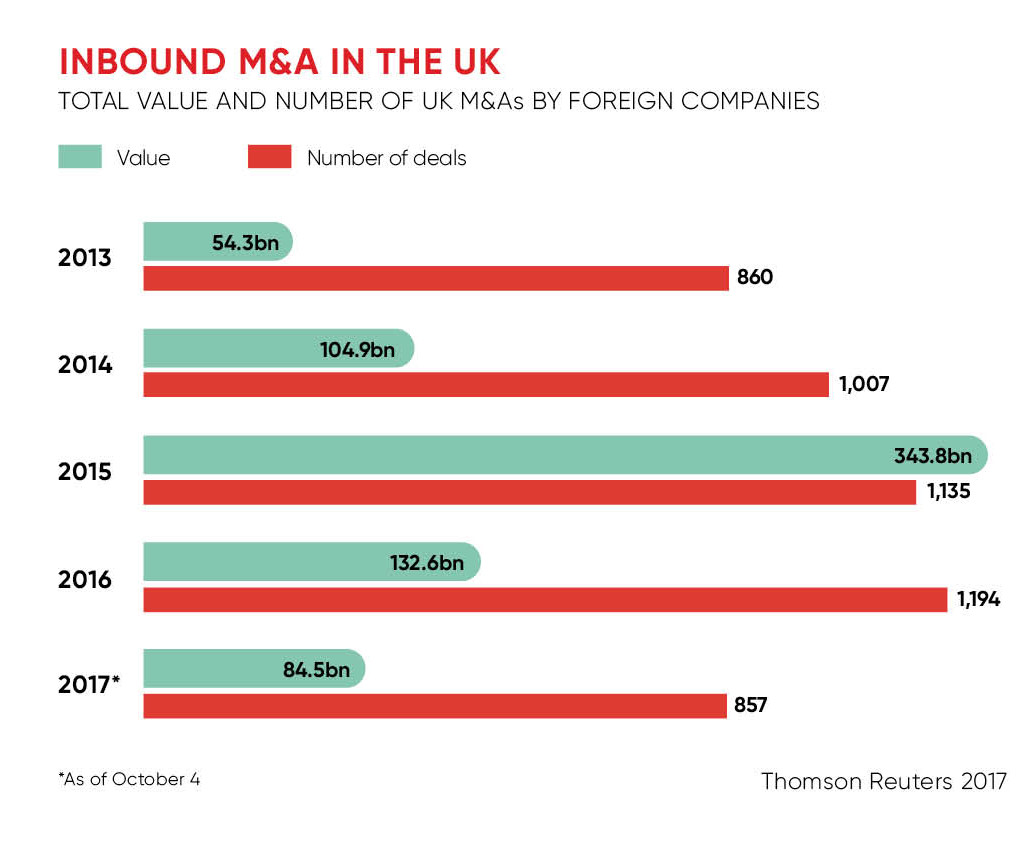 How much is attributable to Brexit is harder to measure. The financial sector has been among vocal Brexit critics. Robert Adam, corporate partner at law firm Baker & McKenzie, notes that while UK firms remain attractive to buyers, “it is clear some investment that would otherwise have been destined for the UK is now being diverted into the EU 27”. Meanwhile, the food, retail and construction industries have warned of potentially restricted access to European labour.

“The main concern, if you’re buying something in the UK with business in Europe, is what that company’s business is going to look like after Brexit,” says Mr Whitchelo. “It is the access to human capital and the ease of doing business after Brexit that may be in the minds of some buyers.”

Sally Dixon, a director at PwC, warns of businesses’ staff risks. “As a buyer, you need to extend your HR due diligence to cover relevant Brexit people risks, and as a seller you need to review these risks and think about mitigations and how you’ll give reassurance to buyers,” she says.

Concerns over potential regulatory and tax changes also dampen buyer enthusiasm. In the United States, tax changes are cited as derailing the Pfizer and Allergan merger, while anti-competitive courts blocked the link-up of Halliburton and Baker Hughes. Buyers looking at the UK will eagerly wait to see UK regulation’s evolution after Brexit.

In spite of these concerns, it is clear the UK is still a popular destination for acquisitions. “The UK is, and will remain, an open economy with a strong tradition of originating and growing successful companies,” EY’s Mr Ivermee concludes.

While some buyers wait for the Brexit picture to clarify, others will assertively acquire UK companies, perhaps with just a little more risk management.