To some it’s the most influential blueprint since sociologist Max Weber was writing a century ago. To others, it’s a recipe for cultish anarchy. The doctrine of holacracy, which suggests companies should remove all managers and rebuild themselves for total employee empowerment, is as divisive today as when the first manifestos were published more than a decade ago.

But now the holacrats, with their vision of a perfectly flat organisation where all disputes are settled by company rules, think the zeitgeist is shifting. As Tom Thomison, founder of HolacracyOne, says: “The whole world is catching on to where we’ve been for the last decade and a half.”

It’s not hard to understand the optimism. In this coronavirus era of remote working, companies are facing an inexorable loss of control. Even if they don’t fire all their managers, they’ll inevitably have to cede ground to their employees.

The alternative — to try and replicate the old physical controls in a distributed world — simply isn’t feasible. As Daniel Gallo, director of people and culture at McLaren and previously head of human resources at Liverpool Football Club, says: “If you try to micro-manage a workforce across different locations, different time zones, you’re just destined to fail.”

If you try to micromanage a workforce across different locations, different time zones, you’re just destined to fail

That doesn’t mean the leader’s role is redundant. But leaders must prioritise influence, rather than control. By prioritising employee empowerment at every turn, they can create an atmosphere in which they don’t need to monitor workers. The team will essentially run itself.

This requires strong communication. Rather than relying on a personal email, leaders can adopt real-time communications technology. Gallo, who oversees a global team at McLaren, says this shift is already happening.

“I’ve seen an acute increase in WhatsApp [since COVID-19], and my email volume has gone down significantly,” he says. “I was talking to someone in my network last week to see whether that was just McLaren. They said ‘no, it’s amazing’. Email’s suddenly going out of fashion.” 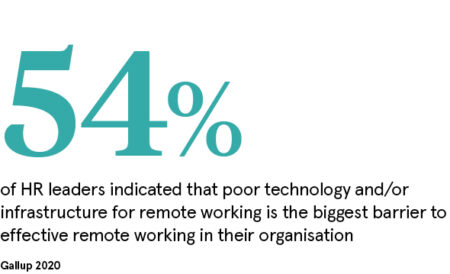 Like many others, McLaren relies heavily on Microsoft Teams, whose user base recently jumped 70 per cent in a single month. Of course, this technology doesn’t just allow leaders to communicate, it also enables them to track the activity of their people. A mini-industry has shot up, devoted to the purpose of employee-watching.

But this isn’t really the point. In fact, all the evidence suggests that the companies which emerge triumphant in the remote age won’t be the clock-watching Big Brothers; they’ll be the ones that let people take ownership of their own working lives.

IBM, the world’s fifth-biggest tech company, has harnessed remote working since the mid-1990s. Andi Britt, senior partner of talent and transformation in Europe, says: “Our default is to trust our employees, not track them when they’re working remotely.” In fact, staff are being actively encouraged to set their own hours.

A whole host of companies are taking similar steps. David Fairhurst, who headed up McDonald’s HR division, says: “In the UK, we gave the crew family contracts and online self-scheduling,” he says. “We should measure outcomes, in other words what they produce, rather than inputs or the times they turn up at work. This frees them up to achieve their objectives in the way which best suits them.”

But if we’re not going to judge people on hours, we’re going to need new metrics. Again, employee empowerment is key. Fairhurst is big on the concept of job craft, where employees are invited to personalise their jobs around their skills and abilities, and create an appropriate set of key performance indicators.

Eric Simpson, a futurist who helped implant remote working culture at Transport for London, agrees: “What we did was ask ‘what do we do and why do we do it? Think of the job and write it down’. But I’d also advise people to ask ‘how is that measured?’” Often, companies miss this out.

“Forget the subjective ‘you say you’re busy, I say you’re not’. We’re going to work out what a day’s work actually looks like and we’ll keep talking until we agree,” he says.

While ‘clan’ organisations are hard to form, they govern themselves with few market or hierarchy mechanisms

Simpson says this isn’t control-freakery; it’s quite the opposite. “If someone asks what we get out of a particular colleague each day, I can provide the answer without chasing that person up. That’s not micro-managing, that’s freedom.”

If colleagues are empowered to define their own roles, they can take ownership of company culture. And evidence suggests this is crucial for our new, distributed age. Organisational theorists like the idea of “clan” organisations, whose culture serves as both a unifying force and a motivational tool.

Dave Ulrich, management theorist and creator of the Ulrich Model, says that while clan organisations are hard to form, “once established, they govern themselves with relatively few market or hierarchy mechanisms”.

But how do we build this culture? Thankfully, we have plenty of role models. Long before holacracy was conceived, Apple had laid out its own tablet of rules; those commandments have since been woven into the company’s “more than a company” mythology. The recent explosion in company culture books shows that many companies are keen to follow this glossy example.

Which is all well and good, but if we really want to inspire our people, and ensure they produce without supervision, we need to get hiring right. We need to attract stars, not simply because they are more productive, but because they can become totems for the organisation, inspiring one another.

To find these people, we may need to rethink the entire hiring strategy. Instead of posting a job advert and sitting back, we can use networks such as LinkedIn to headhunt the people we want. And instead of the bland, lie-riddled CV, we can find more intelligent ways to ensure the right people are reaching us. One example is the growing use by tech firms of application programming interfaces, or APIs, inviting developers to submit their candidacy in the form of code.

This may sound a bit extreme, but really it’s about getting to the new reality first. If we can deliver true employee empowerment and build a remote-friendly contract with our employees, we can control our markets without having to control our own people. The more we give, the more we’re likely to get back.