Agility requires a different way of working and traditional hierarchies can often be a major challenge, so changing the power dynamic across an organisation is vital 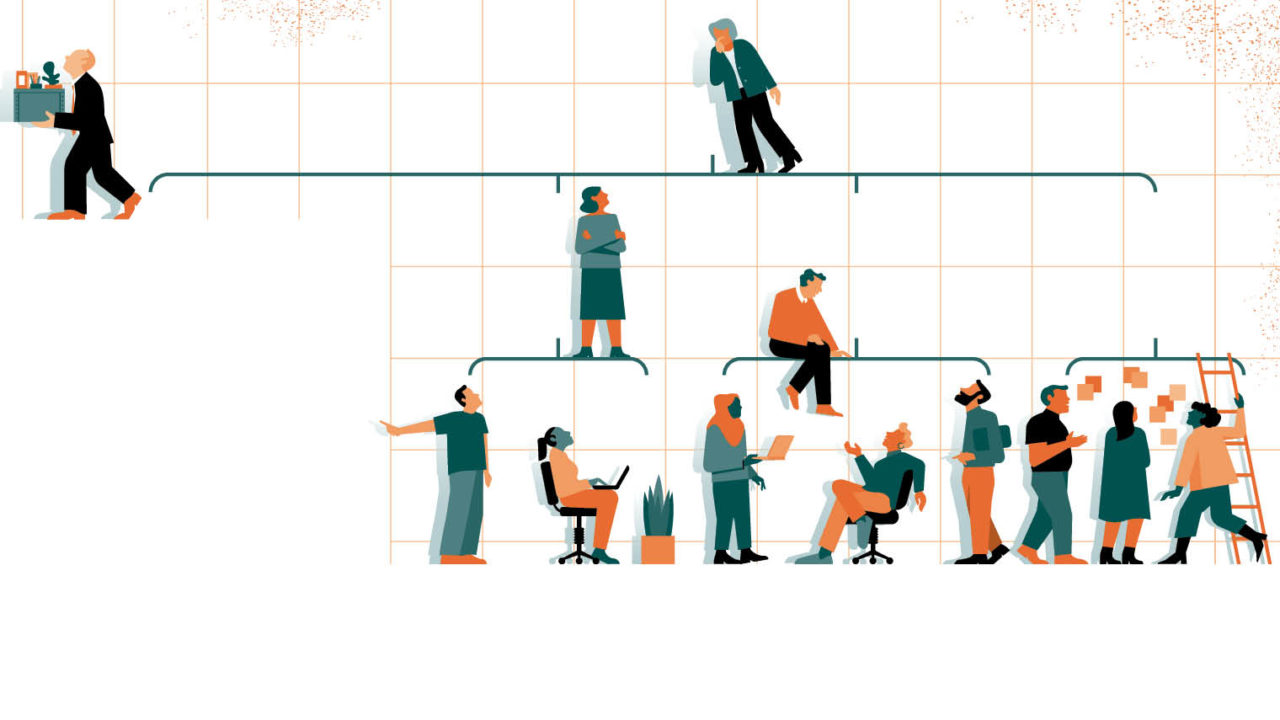 Agile was originally developed as a software development methodology, based on swift, adaptive problem-solving, with teams and individuals given ownership and accountability for their work. Since then agile culture and mindset have been taken up more broadly across organisations as a whole, and with good reason.

However, in a survey last year, the consultancy found that only 4 per cent of organisations have actually achieved full agility. The main reason, it says, is culture and reluctance to change. Time and again people, who have become used to a traditional corporate structure, struggle to find their place in the new world.

“Managers like to take ownership and enforce a controlled leadership style. For organisations trying to adapt agile ways of working into their business, this presents a real problem as it goes against the very essence of what agile tries to promote,” says Marc-Olivier Hilgers, principal, agile transformation and enablement, at Capgemini.

If you’ve been a manager for 20 years and worked your way up to be quite senior and thought that now you’d get to tell people what to do, then you’re going to struggle with that as a concept

“They’re resistant to changing their mindset and are reluctant to leave behind old, trusted ways of working. This makes sense, since it’s their behaviour that got them to their current leadership position,” he says.

“To really make agile work, senior managers need to outline what’s in it for middle management. Changing the power dynamic will be influenced by several key factors, from investors and their views, to the way in which staff are recognised and rewarded, and the behaviour of their own leaders.”

While the role of middle manager doesn’t generally feature in the new way of working, the individuals currently in these positions have a large part to play.

“Middle management is where the two layers of what to deliver and how to deliver it come together, as they are tasked with helping to disseminate the company strategy and provide context for delivery teams to make decisions aligned to that strategy,” says Mr Hilgers.

“Scrum and agile frameworks don’t have official roles for middle managers. However, there are different roles in implementing and operating agile at scale that middle managers can take on. Organisations should shift their focus from functional management towards skills and talent management to form truly multi-functional teams, or change roles towards product owner or product manager.”

Winning over staff at DHL

When DHL Express embarked on a digital transformation programme under new chief executive Ken Allen, it was losing around €2 billion a year; it’s now in profit by the same amount. Changing traditional hierarchies was key to this success, but it wasn’t all plain sailing.

“If you’ve been a manager for 20 years and you’ve worked your way up to be quite senior and thought that now you’d get to tell people what to do, then you’re going to struggle with that as a concept. Ken was wiping away everybody’s traditional power base, which they’d quite liked,” says Sue Stoneman, chief executive of employee engagement agency NKD, which helped manage the change.

While some senior members of the team went so far as to resign, most staff were won over by the time they’d completed the comprehensive training process and understood the opportunities of the agile culture and mindset, as well as their new roles.“Initially they struggled, initially they hoped it was a flash in the pan that wouldn’t last. Most of them, though, because they were getting super-high development which they hadn’t had in donkey’s years, were feeling valued and invested in,” she says.

Peter Newhouse, Unilever’s global head of reward, which handles salary, pension, benefits, shares, car allowance and so on for the company’s 68,000 employees, says changing the hierarchical structure of the department was key to the development of a total reward system. This merges all reward data into a single platform, providing real-time, up-to-date access to total employee reward costs.

“One aspect to win over middle management could be governance; in our case, there’s now a central record, which provides for transparency in reward both systemically and in terms of individual pay arrangements, that strengthens the governance model,” he says.

Knowing the limitations of agility

However, it’s worth remembering, says Made by Many founder William Owen, that not all processes can be submitted to the agile approach, which means not all staff need to embrace change.

“Many jobs work within extremely narrow thresholds with very little tolerance about what you can or can’t do: a call centre operative or a bank teller, for example,” he says. “These processes have been designed to do things as efficiently as possible and have regulatory compliance; when you start applying agile to that then you’re going to have problems.”

Meanwhile, while agile culture and mindset may involve a less hierarchical, command-and-control structure, the role of the leader should not be underestimated.

“Our experience has shown that strong leadership is vital to the success of agile, but leadership needs to be courageous enough to enable change,” says Capgemini’s Mr Hilgers.

“By promoting the correct working environment and culture, by communicating the business vision and goals clearly to the workforce and then trusting their people with the empowerment of decision-making to do the right thing in the right way, leaders are effectively sharing the power of success across the organisation.”

Airline Finnair partnered with digital transformation firm Made by Many initially, in 2015, to create a next-generation booking engine.

"Then we were working with a tiny team of three or four people, which involved both sales and engineering. If we wanted to make a change that involved Finnair's current processes, we couldn't make those changes because they were outside the remit of the team," says Made by Many’s William Owen.

"They had four product teams and we worked closely with Finnair to define their digital strategy. We defined the objectives of these team so they were working in concert, using clear guiding principles towards a high-level corporate objective," says Mr Owen.

"Where Finnair were particularly smart and genuinely agile is that they gave these teams the authority to
decide how to move forward in their respective areas, what to prioritise and also enable people in the wider organisation to understand how they made their decisions."

Changing organisational structure was not without its problems, as individuals and teams were given more autonomy.

"One classic hiccup is, to gain momentum, it makes sense for people to be allowed to get on separately to fulfil their objectives. You come to the point potentially where people are moving in contradictory or separate directions," says Mr Owen.

"Finnair caught that early and we went in to help them define these, to get their different teams working together. Of course, that takes time and money.”