It’s part of outsourcing legend. Overseas call centre staff were, it was said, given briefings on EastEnders and British football, as well as adopting English names, so they could lessen cultural barriers with their UK customers.

Not surprisingly this bit of supposed subterfuge failed. Either way, around seven or eight years ago, companies such as Santander were stung by criticism of their offshore customer support centres with low-quality phone lines and staff reading from scripts in poor English. So they began to reshore, bringing their operations back to the UK. 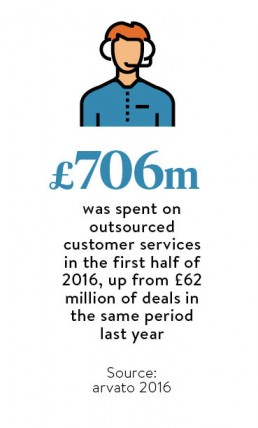 The increased cost of running customer contact centres back in Britain was originally accepted as a necessary economic evil, but now companies are realising they can and must add value to their UK-based call-handling operations. Justifying the additional cost requires them to rethink the role of these essential customer touchpoints.

“Many companies have shifted their idea of what good customer service is,” says Christine Stubbs, contact centre and workforce optimisation consultant at Maintel, a managed service provider. “Now customers are empowered by the choices offered to them via the web. This also means that fewer contact centre staff are needed. This leaves more budget to be able to reshore call centres back to the UK, which brings a direct benefit of empathy to many companies’ customer care.”

Earlier this year, EE started to return all its customer service roles to the UK and Ireland. The company now receives fewer than six complaints per 100,000 customers, well below the industry average.

“We’ve had fantastic feedback from our customers about all of the changes we’ve made and the number of complaints has plummeted, but we’re not stopping there,” says EE’s chief executive Marc Allera. “We’re creating 550 additional service jobs here in the UK to answer all EE customer service calls in the UK and Ireland by the end of 2016.”

While UK call centre agents may or may not be any better at resolving issues than their offshore counterparts, at least they are able to empathise with infuriated customers, by talking about the weather, politics, topical current affairs, or even delivery or non-delivery of services and products. “Empathy is something that can’t be bought or taught,” says Ms Stubbs.

Lee Durham, co-founder of durhamlane, a telesales consultancy and training company, says: “Fundamentally, people want to discuss their problems with native speakers. It’s not only a language barrier, but a cultural barrier. It’s difficult to create cultural understanding, which is important in communication.”

Clients are increasingly interested in UK-based call centres not just because of the benefits of a familiar accent and cultural connections, according to John Devlin managing director of Ascensos, a multichannel customer contact centre based in Scotland, which was launched in 2014 and whose clients include B&Q and Karen Millen.

Fundamentally, people want to discuss their problems with native speakers

“It’s more complex than that,” he says. “These days the experience is more conversational than simply transactional. This is partly because social media has become more important. With social media you actually have to have a closer connection than the people you’re talking to in order to understand the nuances and the famous British sense of irony and humour. What we provide isn’t just a contact centre, it’s part of a client’s digital marketing operation creating content and engaging in conversation.”

New technology is both bringing down the costs for customer service centres based in the UK and allowing them to add value to the traditional model, according to James Hall, chief executive at artificial intelligence (AI) and robotics company Genfour.

“In transitioning back to the UK, many companies are capitalising on the momentum and they’re implementing intelligent automation such as robots, cognitive systems and AI in order to become more productive, using local talent to manage this automation,” he says. “It’s not about cutting staff, it’s about focusing your people on creating value-adding tasks rather than the mundane, repetitive jobs. Beyond productivity, the benefit is a new level of customer service and the human element that local users feel comfortable with.”

Simply Business, one of Britain’s largest small and microbusiness insurance brokers also finds that having a UK-based trained, specialist workforce able to use their initiative more than makes up for any extra costs. “From a customer perspective, we can get straight into the detail of the day-to-day work rather than having to deal with any cultural or contextual problems,” says general manager Phil Williams. “We’d have to use more formal scripting if we were to offshore our operations just to ensure our customers find the right cover.”

According to Dominic Jephcott, chief executive at supply chain and procurement consultancy Vendigital: “To cover the costs of reshoring or escalating input costs, firms must aim to move up the value chain, providing superior services to customers which justify a higher price tag.”

However, he has a warning. “While businesses with UK-based customer service centres can drive competitive advantage through promoting improved customer relations and satisfaction, access to labour in the UK may become an issue,” he says. “With the minimum wage due to eclipse £9 per hour by 2020 and Brexit set to impede the flow of EU migrant workers into the UK, the investment required to attract and retain employees could well negate the financial benefits achieved by dealing in sterling.”

Customer contact centres in India, which enjoyed 20 per cent growth in the first years of their existence, are now beginning to fight back, introducing some of the most diverse, sophisticated communications that UK-based counterparts are engaged in.

“When companies first started offshoring, it required a leap of faith and so they simply replicated their UK call centres, but now they’re becoming more innovative,” says Bhupender Singh, chief executive of Intelenet Global Services. “These days we’re helping them to reduce their call volumes by offering self-help channels, digital channels and analytics.”

As an offshore outsourcer, Mr Singh knows that his company has to up its game to meet increasing competition from the UK – something that should benefit the end-customer.