The British government has put the development of a Chinese-backed nuclear power station on ice, prompting an angry response for Beijing

The UK government’s decision to delay signing a deal to build a new nuclear power plant at Hinkley Point could stall its special relationship with China. Prime minister Theresa May put the £18 billion deal on ice, to the surprise of the French utility EDF, which was due to operate the plant, and China General Nuclear Power Company, which was providing around a third of the funding.

Hinkley Point C was a flagship deal under the previous government’s burgeoning business relationship with China, and Beijing has reacted angrily to the delay, which was reportedly prompted by fears that it would hand China too much power over the UK’s critical infrastructure.

Those opposing the deal over national security concerns were given new ammunition later in August, when the company was indicted in the US for espionage, along with its local contractor.

The Chinese telecoms company Huawei already provides the UK government with telecoms – a deal that is far from universally popular with civil servants. The company has long denied that there is any interference from Beijing, and that security fears are unfounded.

The delay to Hinkley Point is a blow for CGNPC and its ambitions to become a player in the energy infrastructure business in developed markets. Diplomatically, it has tarnished the ‘golden era’ of commercial relations between the UK and China, brokered by the former chancellor, George Osborne.

Writing in the Financial Times, China’s ambassador to the UK, Liu Xiaoming, warned that relations are now at a “critical juncture”.

Under Osborne, Chinese foreign direct investment into the UK rose, totalling more than £20 billion, according to figures from the Heritage Foundation. However, that came alongside an overall expansion of Chinese investment worldwide, and the UK – as the then-fourth-largest economy in the world, and an EU member – naturally attracted its share.

China has options of who to work with. The UK does not have too many options

With the UK’s position in the European single market now in doubt, the government may need to make a harder sell to its international partners. Membership of the EU meant that Britain was seen as a gateway into other European markets – now it may need to make a case on its own merits. The UK needs foreign investment to cover the deficit in its current account.

This means that the UK may need China far more than China needs the UK.

“China has options of who to work with. The UK does not have too many options,” says Yu Xiong, a professor at Newcastle Business School who advises the UK’s Department of Business, Innovation and Skills on innovation collaboration with China.

In 2015, the UK took just 2.4 per cent of China’s $64 billion (£49 billion) total foreign direct investment. Much of that money is private capital, rather than government funds, but as Xiong says, Chinese businesses tend to take their lead from their government when it comes to making investment decisions overseas. This means that to get money from China’s largest companies, the UK will need to keep cordial relations with Beijing. 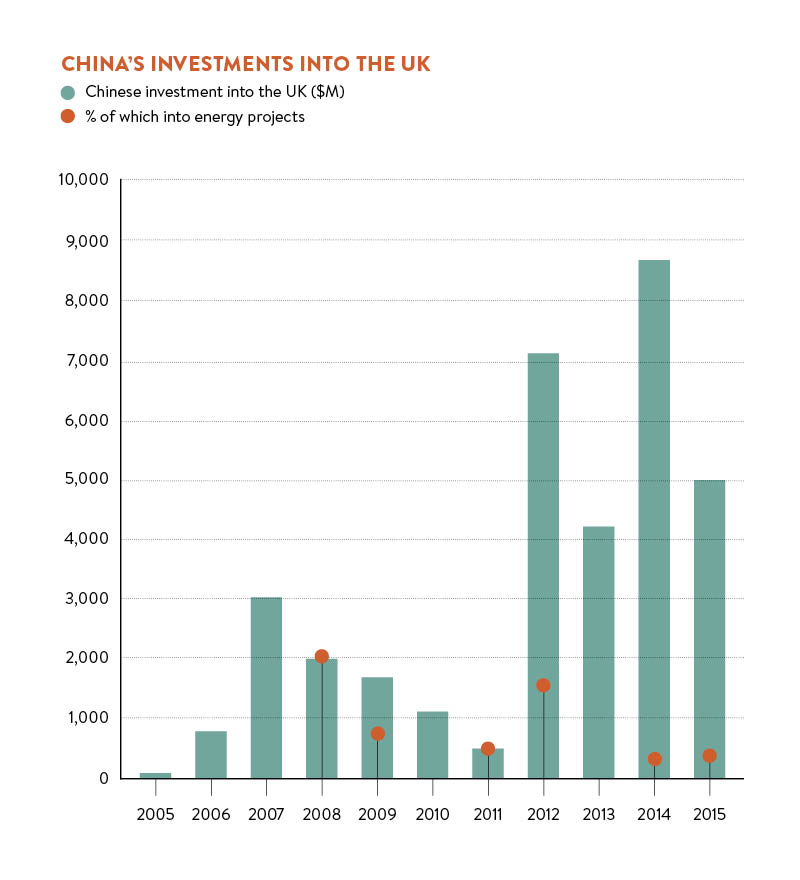 That is not to say that the UK is unimportant. Under David Cameron and George Osborne, the British government pitched itself as an advocate for China in the West. With a seat on the UN Security Council, as well as world-class technology and education, the UK had influence and assets that Beijing needs as it becomes a global superpower.

Britain supported China’s moves to create new modes of global governance. When Beijing began to build its alternative to the World Bank, the Asian Infrastructure Investment Bank, the UK broke ranks with the US to join up. Sir Danny Alexander, the chief secretary to the Treasury under the coalition government, is now a vice-president of the AIIB.

The Hinkley Point delay marks a block in the road, if not a total reversal of that pro-China policy. However, although he says that there is likely to be “severe turbulence” in the short term, Xiong believes that the relationship will be reset at some point during May’s term.

“In China there’s a saying, every new leader wants to set three fires. That means they want to do three different things [to their predecessor],” he says. One was clearing out Osborne and the Camerons from the cabinet; the second was the new approach to China.

“Like David Cameron, when he became the prime minister six years ago, he met the Dalai Lama to show that he was different from previous leaders. But that really had a negative impact on the relationship, and after one and a half years, he was very keen to correct it.”